Take over the Tri-State Area (failed many times, succeeded twice).

Doofenshmirtz Evil Incorporated is the main antagonistic faction of the Disney Channel series Phineas and Ferb, and later a minor faction in the Disney XD series Milo Murphy's Law. It is a company that is owned by Heinz Doofenshmirtz, which also serves as his evil hideout; plus, every different version of Doofenshmirtz has a building that greatly resembles the original one.

Doofenshmirtz Evil Incorporated is a tall purple building that is roughly 55.8 feet tall. A large area is spaced to the side, leaving a huge gap. The roof is capable of retracting, and the logo "Doofenshmirtz Evil Inc." is located near the roof on the front and back sides of the building.

The company also owns other buildings/companies/vehicles, including:

Once, Vanessa Doofenshmirtz sang a version of the jingle ("Looking for books at my dad's place"), and the jingle is also used for other Doofenshmirtz family members ("Doofenshmirtz's ex-wife's sports sedan"). The jingle is also used in the 2nd Dimension ("Doofenshmirtz Evil News Update"). Other dimensions' jingles include the comically long "Malifishmertz Evil Incorporated, but not really a corporation because corporations have not been invented yet so it is more like a guild or tradesman association" from the episode "Excaliferb", and "fully operational Death Star" from "Phineas and Ferb: Star Wars".

Usually, the fictional band "The Slacks" sing the evil jingle. In the episode "Attack of the 50 Foot Sister", the band is seen recording the jingle in DEI as Doofenshmirtz watches. The jingle seems to have preceded the corporation itself, as a variation is used for Doofenshmirtz's bratwurst business ("Doofenshmirtz Quality Bratwurst"); however, the voice is different than the Slacks version. The theme was also once sung to the tune of "Won't Get Fooled Again" by The Who, which featured a different singer. Even Doofenshmirtz himself has sung the jingle twice, once accompanied by himself on the piano, and the other to the tune of the popular English Christmas carol "We Wish You a Merry Christmas".

Twice, the jingle has referred to Pinky the Chihuahua's nemesis, Esmeralda Poofenplotz, during the episodes where the Doofenshmirtzes do not appear.

The backstory of Doofenshmirtz Evil Inc. is largely a mystery. It was founded after Heinz Doofenshmirtz came to America, and was most likely created after his failed bratwurst business venture, as it shares the same jingle. Its creation probably also took place after Doofenshmirtz's apprenticeship with Professor Destructicon ended with Destructicon's arrest.

DEI's financial status is also largely unknown, especially how it manages to buy real estate and other materials for Doofenshmirtz's needs, seeing as his only known source of income is his ex-wife Charlene's monthly alimony checks. Some theories as to how it funds Doofenshmirtz's evil plans are that the other people living in the main DEI apartment building pay rent to the company, most of the buildings bought are pre-owned or deserted by their former owner (allowing for the "abandoned" ), the company leases out its unused and intact buildings to other parties, or through more nefarious means. Despite this, DEI seems to have no financial problems, easily funding all of Doofenshmirtz's -inators (and most likely whatever damage costs come from their ultimate failures).

The main building itself seems to go through countless renovations; the interior of Doofenshmirtz's lab usually is different from episode to episode and is constantly being rebuilt with different additions (such as the completely carpeted version from the episode "The Chronicles of Meap"). It is believed that there are separate rooms for Doofenshmirtz, Vanessa, and Norm, plus other necessities. The exterior is also continually changing, with windows and stripes added and removed based on each episode's needs.

So far, the company has succeeded in taking over the Tri-State Area in two occasions. The first time was in "Phineas and Ferb Save Summer", when Doofenshmirtz created a tractor beam that successfully moved the Earth away from the Sun into an early autumn; it caused civil unrest and allowed him and his fellow members of L.O.V.E.M.U.F.F.I.N. to briefly take over City Hall by force. The second time was in the finale "Last Day of Summer", when Doof successfully created a Tri-Governor's Mansion to get himself unanimously elected as the first Tri-Governor before deciding to resign from evil.

In the episode "Act Your Age", Doofenshmirtz Evil Inc. has been changed to remove the "Evil" portion, as Doofenshmirtz is now working as a school science teacher; the jingle reflects this change. It is unknown what the corporation is doing now that Doofenshmirtz has resigned from evil.

The company appeared in the episode "Fungus Amongst Us" and the special "The Phineas and Ferb Effect", where it was revealed that Doofenshmirtz would become the future inventor of time travel known as Professor Time, and that he would rename the company as Professor Time's Building for branding purposes, as he would sell products based on his time-travelling technology (such as Time Chips) for profit. With his skills, Doof managed to create his first time machine to help Milo Murphy, Balthazar Cavendish, Vinnie Dakota, Orton Malthson and Perry travel back in time to succesfully erase the Pistachions (led by Derek) from existence.

Despite being happy that he would become someone very important in the future, Doof is distraught to see his building getting destroyed (per Murphy's Law) following the Pistachions' demise, forcing himself and Norm to move in to the Murphys' residence for a while. He is also upset to hear that the O.W.C.A. still thinks of him as dangerous in spite of his retirement from evil. However, during the journey to the Octalians' planet, Perry manages to rectify this by giving Doof some of his earnings as compensation so that Doof can rebuild his company as Professor Time Industries and continue up his path as Professor Time, much to Doof's delight. 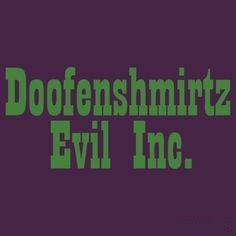 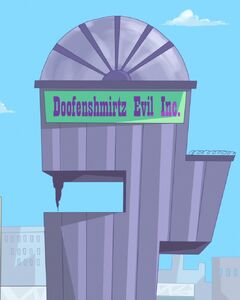