Kidnap Goldie O'Gilt and make her his new grandma (failed).
Get revenge on Louie Duck for getting him grounded for life and have no one else interfere with him (Abandoned)

Unlike his 1987 counterpart, who was a well-appreciated and kindhearted ally of the McDuck gang, this time around Doofus is portrayed as a spoiled and power-hungry brat. He is Louie Duck's arch-nemesis.

He was voiced by John Gemberling.

In "Day of the Only Child!", Dewey invents a holiday in which he and his brothers pretend to be only children. Louie uses this as an opportunity to meet Doofus, the richest kid in Duckburg. Meanwhile, Huey is forced to attend the Junior Woodchucks three-man cookout alone while Duey enacts his own talk show at McDuck Manor.

Upon arriving at Doofus' mansion, Louie is brought into his large, toy-filled playroom. Doofus introduces himself by gifting Louie with a "friend present" - a bracelet. Louie's day goes as well as he planned as he enjoys all the amenities Doofus has to offer. They eventually arrive in the treasure room where Doofus wrecks several valuable, priceless objects. Louie figures that 'real wealth' is being able to do whatever you want because nobody can stop you. He joins Doofus in the destruction, which abruptly ends when Louie almost desecrates a portrait of Doofus' late grandmother Frances (or "Gummeemama" as he calls her). Doofus goes crazy with rage and Louie quickly discovers his servants are really his parents. It is revealed that Doofus started out as a sweet and loving kid, which all changed when his grandmother passed away and he inherited her fortune, corrupting him into what he is now.

Louie attempts to escape, only to find out that his bracelet is a floor magnet which keeps him stuck, and that he was actually Doofus' friend present. Being held hostage, Louie tries to get Doofus' parents to help him, but is ratted out by his father. Doofus proceeds to punish Louie in an unknown manner using an umbrella and a bag of walnuts. Huey and the Beagle Boys suddenly crash into the room and find themselves in the situation as well. Once Dewey shows up with a security drone, he and his brothers decide to bond again in order to defeat Doofus and the Beagles.

In "Treasure of the Found Lamp!", Doofus comes upon Gladstone Gander carrying an old lamp sold to him by Louie. Doofus offers to buy it from Gladstone using sticky nickels, but Gladstone refuses, so instead Doofus trades his blimp for the lamp. Louie and his brothers Huey and Duey visit Doofus at his home while he makes his parents dance to a song on the thermin. After he finishes, they ask him about the lamp, and Doofus remembers buying it to make it his new syrup boat, but after it ran out of syrup he threw it away, leaving it in the hands of the Beagle Boys.

In "Happy Birthday, Doofus Drake!", Doofus returns in his biggest role since his debut. His prominence in the episode is due to Louie teaming up with Goldie O'Gilt to pose as an aunt and nephew couple to invade his "Septleventh Birth Anniversary" party so they can steal the million-dollar gift bags that he's giving out. Unsurprisingly, seeing as how Doofus doesn't have any real friends, all of the party's other guests are revealed to be shady individuals who are posing as parent and child duos to steal the gift bags as well. However, Doofus sees through most of their disguises, and drops them through trap doors into what he calls "honey bins", where they are stung repeatedly by bees that they're trapped with, which quickly leaves them, along with none other than Flintheart Glomgold and Mark Beaks, who are passing off a ventriloquist dummy and a robot named B.O.Y.D. as their respective sons, as the only remaining guests.

After Louie and Goldie succeed in exposing the others as frauds, Doofus gets angry over his birthday party being ruined, and Goldie turns on Louie by blaming him for their collective actions. Doofus then reprograms B.O.Y.D. to string him up like a pinata and beat him, quite likely to death, with a bat. However, Goldie steps in and saves him since she feels like this is going too far. Much to their surprise, Doofus calls off B.O.Y.D. and reveals that it, and possibly, by extension, the whole birthday party, was a test of their bond of parenthood, and claims Goldie is worthy of being his new "Goldiemama", after which he relinquishes his gift bags to Louie and catapults him out.

Feeling tempted to take the gift bags and walk away, especially after Goldie's earlier betrayal, Louie ultimately follows his conscience and goes back to Doofus' house to save her, where it is revealed that he has her in a glass case and is forcing her to tell him stories, where she admits that being stuck as his "Goldiemama" is even worse than a time when dimensional imps jabbed her with splinters and taunted her over her greatest failures. However, just after that, Louie appears with the gift bags and demands that she be let go, but Doofus vehemently refuses and orders his parent slaves to attack. However, they stop in their tracks when Louie reveals he brought along B.O.Y.D., who Louie was able to take control of since he got a hold of his control unit, which Doofus left in one of his gift bags. B.O.Y.D. then frees Goldie using his laser vision, and Louie tells Doofus that what he needs is not a new "Gummeemama", but someone his own age to get close to. He then reprograms B.O.Y.D. to be his new baby brother, after which he identifies Mr. and Mrs. Drake as his parents, and they happily embrace him as their new adoptive son.

However, Doofus doesn't like this, throws a childish temper tantrum, and furiously threatens to sever his parent's pay, but B.O.Y.D. simply transfers half of the money in Doofus' bank account into his own since, as his new brother, he is entitled to his late grandmother's fortune as well, and is more than happy to share it with his parents. Now that he no longer has control over their pay, which was his main means of forcing them to cater to his every whim, his parents finally gain the will to stand up to Doofus, with his mom sternly grounding him indefinitely after he insults his new brother by calling him a "sentimental toaster". This effectively leaves him powerless, for which he vows revenge against Louie.

In "Moonvasion!", Doofus makes a brief, non-speaking cameo along with his parents and B.O.Y.D., who have all been taken hostage by the Moonlanders. They are presumably freed along with everyone else they captured after the Moonlanders discover how depraved their leader, General Lunaris, really is, and make peace with the inhabitants of Earth.

Doofus makes a couple of brief, non-speaking cameos in "Challenge of the Senior Junior Woodchucks!" as a Junior Woodchuck. This possibly indicates that now that he's lost his fortune, he's on track to becoming a better person.

Doofus appears again briefly in "Astro B.O.Y.D.!" when Gyro and Huey are viewing B.O.Y.D.'s memories where in one involving him, he tries to encourage him to break one of his mother's necklaces as revenge for not giving him gravy baths anymore. However, B.O.Y.D. is uncomfortable with breaking anything, to which Doofus responds by angrily asking why "he insists on breaking his heart". B.O.Y.D. then apologizes and offers to hug him, which scares Doofus since he's afraid that he's "attacking him with love", before Gyro and Huey switch to a different memory.

While Doofus doesn't physically appear in "How Santa Stole Christmas!", his name makes a cameo in a red stocking, which disgusts both Scrooge and Webby, and it causes Scrooge to throw Doofus' present in disgust.

In "The Life and Crimes of Scrooge McDuck!", Doofus finally returns in a major, antagonistic role by summoning Louie and Scrooge to a mystical karmic court. His intention is to sue Scrooge for allegedly creating his enemies as a way of finally exacting vengeance against Louie, since winning the case will allow them to take Scrooge's fortune, the deed to Duckburg and his Number One Dime, respectively. To this end, he calls Flintheart Glomgold, Ma Beagle and Magica De Spell to the proceedings as his witnesses; the respective arguments they make are that Scrooge overshadowed Glomgold during an adventure by taking a valuable jewel before he could, therefore denying him the love of the people that he craved, that Ma Beagle was morphed into who she was when her father lost the deed to Duckburg to Scrooge, and that Magica went on to continue being bad when she accidently turned her brother Poe into a raven during her first battle with Scrooge, and Scrooge refused to help her by not stopping him from flying away, despite her begging him to. While Louie is able to counter the first two with circumstantial evidence demonstrating that Glomgold and Ma Beagle were already crooked and that Scrooge wasn't entirely to blame, he struggles with the final one, especially since Scrooge somberly admits he went on to use the riches he plundered from Magica partially for selfish, personal gain. It is then that they both realize they must take responsibility for their actions, and Louie offers a sincere apology to Doofus for any wrong he's done him. To his surprise, Doofus accepts his apology, hugs and thanks him, then drops the case by leaving the courtroom.

Doofus displays an unusual, quirky disposition and a tepid personality. However, he is fiercely protective towards his late grandmother and loses his temper when things don't go his way. As mentioned by Louie, he only mingles with other wealthy heirs. As he later discovers, Doofus is possessive, insane, and spoiled rotten, a result of being too young to know how to handle his grandmother's fortune responsibly.

Like his original counterpart, Doofus is a rotund white duck with glasses. However, he now has a combover haircut, a fancy suit, and tan pants with a pocket chain. 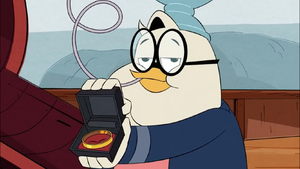 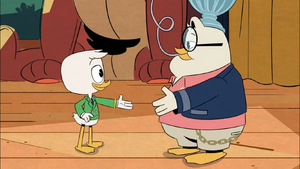 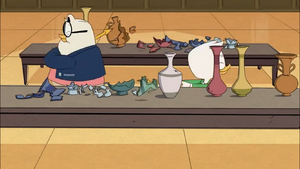 Doofus and Louie "blowing off steam" 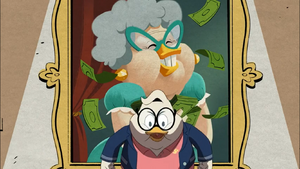 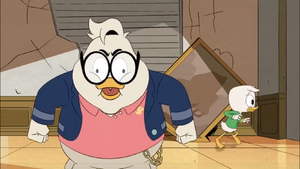 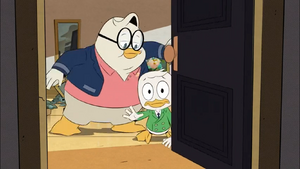 "You are home, friend present." 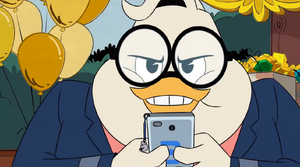 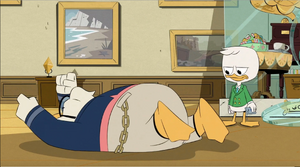