To crush all of Doctor Doom's enemies and conquer all in his name.

To destroy the Fantastic Four.

Doom-Bots (also spelled "Doombots" or "Doom Bots") are powerful and advanced robots built by the arch-villain known as Dr. Doom and are often made in his image, if they are not they are instead programmed to obey his word as law - with the famous "Doom's Word Is Law" phrase being heard often.

Dr. Doom created these robots for the specific task of acting as duplicates, bodyguards and enforcers of his will - depending on their role each Doom-Bot would be fitted with different weaponry and modifications, though many of them shared similiar qualities both in the comic book and in the cartoons that followed.

Although loyal, Doom-Bots have not been without error and a few Doom-Bots have rebelled against Dr. Doom either as heroes or villains: Dr. Doom has shown that some of his Doom-Bots have a self-destruct sequence inside themselves that he can activate (or force them to activate), should the need arise.

The Doom-Bots are heavily armored robots that are resistant to mental, emotional, and illusion attacks. All Doombots can shoot lightning from their gauntlets similar to Doctor Doom's attack.

The Doom-Bots sport jetpacks which can enable them to fly.

There are small mechanic limbs and tools in the head of every Doom-Bot that allows them to re-construct the rest of the body. This allows the robot to infiltrate in enemy fortresses. The pieces are sent through a different way, and the head builds the body in minutes.

Doombots can be set to self-destruct whenever they are in risk of being captured or defeated, or at Doom's whim.

There were different models of the Doombots:

The Doom-Bots made unnamed appearances in the episode "The Fantastic Mr. Frump" of Spider-Man and His Amazing Friends.

The Doom-Bots are merely the name of his robotic soldiers in Fantastic Four: World's Greatest Heroes. They are armed with weapons designed to counter the powers of the Fantastic Four (i.e. ice cannons for the Human Torch, concussion lasers for the Invisible Woman, etc.). Eventually, Doom constructs a bot running on a sophisticated Artificial Intelligence to the point it patterns on how organic brains operate. Aimed at adapting and learning how to defeat the FF, The Thing befriends the Doombot naming him "Bruiser".

The Doombots made an appearance in The Super Hero Squad Show. They were voiced by Charlie Adler.

The Doom-Bots were mentioned as a joke in the episode "The Might of Doom" of Iron Man: Armored Adventures. A real Doom-Bot was used in another episode "Doomsday".

The Doom Bots appeared in the episode "The Might of Doom" of The Avengers: Earth's Mightiest Heroes.

The Doom Bots made an appearance in Ultimate Spider-Man.

The Doom Bots appeared in the episode "The Serpent of Doom" of Avengers Assemble.

The Doombots made an appearance in the episode "Days of Future Smash: The Dino Era" of Hulk and the Agents of S.M.A.S.H.. They are seen in the Latverian embassy guarding it while Doctor Doom is away. The Agents of S.M.A.S.H. fight through the Doombots at the time when the Leader infiltrates the Latverian embassy to get to Doctor Doom's experimental time belts. 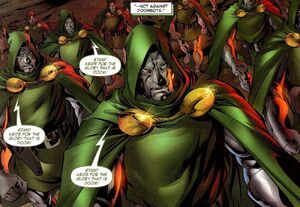 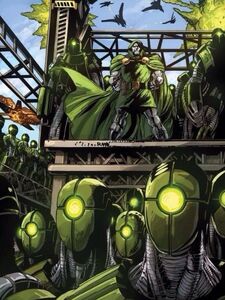 Add a photo to this gallery
Retrieved from "https://villains.fandom.com/wiki/Doom-Bots?oldid=3524747"
Community content is available under CC-BY-SA unless otherwise noted.