NOTE: This article is about the incarnation of Doctor Doom from the 2015 film. The mainstream version can be found here: Doctor Doom.

Working on the portal.

Pump the space of the Earth with his portal facility in order to destroy Earth and transfer it to Planet Zero so he can build a new world under his control (both failed).

He comes from Latveria and is one of the scientists working on the Quantum Gate, eventually succumbing to a source on Planet Zero that turns him into the villain Doom.

He was portrayed by Toby Kebbell, who also played Drake Stone in The Sorcerer's Apprentice and Koba in Dawn of the Planet of the Apes.

Victor von Doom was hired by Franklin Storm to help create the Quantum Gate for his superior skills as a technician, despite setting fire to some of the Baxter Institute's servers from a previous favor.

Von Doom is first seen in his home when Doctor Storm invites him back to the Baxter Institute to conduct research with Reed Richards. Von Doom claims he will only return if Sue Storm is there because she is the only one he trusts.

Von Doom ends up returning to work in the Baxter Building where he meets Richards. Von Doom seems to respect Richards but saves no time pointing out how Richards almost created a black hole when Richards was a child. Von Doom also expresses jealousy of Richards because of how fond Sue Storm is of him.

The night of the successful completion of the project and chimpanzee trial, Von Doom, Richards, and Johnny Storm, under the influence of Storm's alcohol, decide to traverse to Planet Zero. After Ben Grimm arrives due to Richards' insistence, the foursome enter the machine and arrive in Planet Zero. A crisis occurs and the guys find themselves scrambling back to the machine after geysers seem to erupt. Von Doom's rope is burning by the lava and he falls to his supposed death on the planet, while Richards, Storm, and Grimm return to the Baxter Building.

A year after this incident, Harvey Allen builds a second teleporter at Area 57 and travels to Planet Zero. His team discover a humanoid being on the planet and are astonished to find that Von Doom survived his fall. He is brought back to Area 57 where it is found that his suit has become part of his body and the energy that is found on Planet Zero is now inside of him.

Von Doom kills Allen and starts killing several of the workers in the building before returning to Planet Zero and creating a wormhole that would destroy the Earth. Richards, the Storm siblings, and Grimm follow him to Planet Zero to apprehend him. He initially overpowers them before they reconvene and devise a plan. A destructive battle ensues between them and Victor decides to dub himself as "Doom" only. During the battle, The Thing punches Von Doom into the beam of energy where he presumably disintegrates, destroying the wormhole. 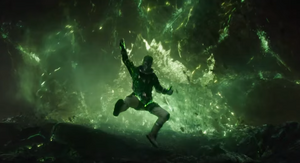 Victor falls to his supposed death

Victor, now as Doom being found by Dr. Allen's men. 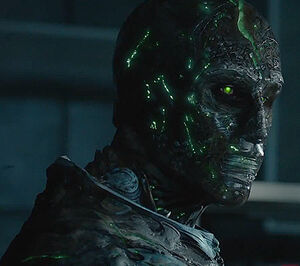 Doom without his cloak and hood about to kill Franklin. 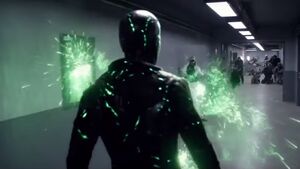 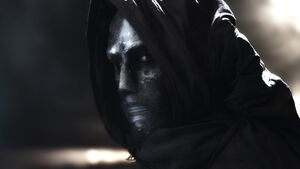 Doom in his hood.