Defeat and kill the Fantastic Four and to destroy the Earth, build a new world in the planet Zero

Victor von Doom a.k.a Doctor Doom is the sole main antagonist of the 2015 movie Fantastic Four.

He will be portrayed by Toby Kebbell who also played Drake Stone in The Sorcerer's Apprentice, and Koba in Dawn of the Planet of the Apes.

Early in the film, 28 year old Victor creates the "Quantum Gate" for Professor Franklin Storm in the Baxter Facility. When he, Reed Richards, Ben Grimm & Johnny Storm enter the Quantum Gate, it teleports them to Planet Zero, a planet full of dying substances. While Victor was collecting substances there, the planet collapsed, leaving Victor presmed deceased.

One year later, Reed, Ben, Johnny and his sister Sue gain abilities after the Quantum Gate explodes. Victor survives his presumed death and is found by the explorers of Dr. Allen (the Baxter Facility's supervisor) and Reed. He is rescued, but believes he has to destroy the human race in order to create a revamped Planet Zero in his prespective. He wreaks havoc in a base and escapes to build a portal that will destroy the Earth. However, he is confronted by Reed, Ben, Johnny & Sue and is punched in the portal beam by Ben, disintegrating him.

Victor, now as Doom arrives to the second universe 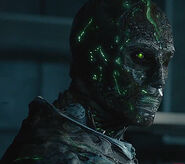 Doom's true form
Add a photo to this gallery
Retrieved from "https://villains.fandom.com/wiki/Doom_(2015_Film)?oldid=1173588"
Community content is available under CC-BY-SA unless otherwise noted.