Battling the Doom Slayer and his Night Sentinels.

All Doom Hunters are voiced by Dave Bloat.

The Agaddon Hunters were artificial demons created in the Talos Realm to hunt the Doom Slayer and his Night Sentinels during the Unholy Crusade. Though the ancient civilization that created them long went extinct, one Agaddon Hunter made it to Earth, hibernating for millions of years in a frozen region which would eventually become Antarctica.

During the Hellish invasion, the Agaddon Hunter was unearthed by the UAC cultists of a rogue Arctic foundation supervised by Deag Ranak. The remains of the hunter were deemed suitable for reconstruction, thus becoming mechanically augmented with various cybernetic "improvements". Three Doom Hunters were built by Ranak and his cultists to serve as their guards, calling them his finest work. While mainly cybernetic, they still retain their sentient, hunting instinct.

During Doomguy's infiltration of Ranak's base, the latter unleashes his Doom Hunters to battle Doomguy. One of the three Doom Hunters is fought in the first round. It attacks by shooting its guns and cannons at Doomguy, slashing a chainsaw at him when he gets too close. It can also shoot rockets that home in on him, which the player can avoid by dashing away or jumping. Its weakness is the top half of its body that it protects using a shield that can be destroyed by using cell weapons such as the Plasma Rifle, although it will regenerate after a while. Doomguy can also target its lower part, the "sled", which is not protected by the shield, although it takes less damage. Once enough damage is dealt, the Doom Hunter abandons the sled. It loses access to the shield, machine gun, and rockets, but becomes faster as a result. Other fodder enemies eventually enter the arena that Doomguy can kill to obtain ammunition. Once the Doom Hunter takes enough damage, it becomes staggered for Doomguy to apply a Glory Kill by using the Doomblade to slice the demon's head in half.

In the second phase upon killing the Doom Hunter and entering a pipe, Ranak summons the other two Doom Hunters. They battle the same way as the first, although there is more ground to maneuver. Doomguy should prioritize on battling the Doom Hunters separately so he only has to deal with one Doom Hunter in its flying form rather than both. Once both Doom Hunters go down, Doomguy has his revenge on Ranak and slices off his head.

After defeating Ranak, a few other Doom Hunters are encountered as minibosses throughout the rest of the game and "The Ancient Gods" DLC under the Super-Heavy category. 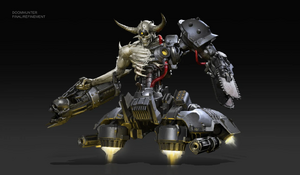 Concept art of the Doom Hunters. 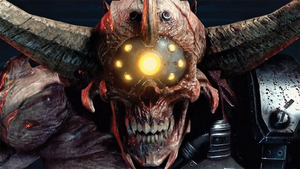 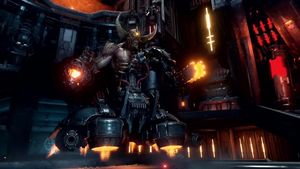 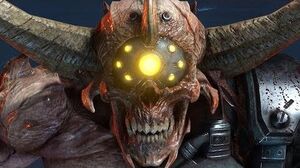