The Doomers are a species of luminescent creatures who appear as enemies in Kirby's Return to Dreamland. They come to Dreamland in search of the Energy Spheres after the Lor Starcutter crashes and releases them.

Small purple doomers who fly in groups. They are incredibly weak and can be taken out with just one shot from Landia.

Wingless Doomers who scuttle around on surfaces and shoot out green energy orbs at the heroes.

Large spiked Doomers who typically appear in sets of three, when they are destroyed, their four spikes will shoot out in different directions

Doomers who serve as Mid-Bosses. They come to Dreamland seeking the Energy Spheres and fight Kirby and his friends every few levels.

A large winged purple Doomer appearing exclusively to Team Kirby Clash Deluxe and Super Kirby Clash. Unlike the other Doomers, it lacks an Energy Sphere in its mouth. Most of its attacks are reused from the other Doomers. First fought in the Ruins as a Tough boss, the Greater Doomer returns in the Dunes as a Tougher boss and must be fought to access Landia EX.

The apparent leader of the Doomer species. He appears as the boss of Nutty Noon and Kirby has to fight him in order to retrieve the mast for the Lor Starcutter. 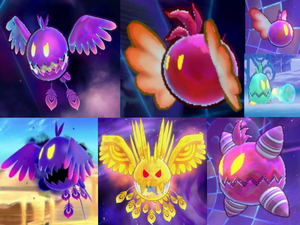 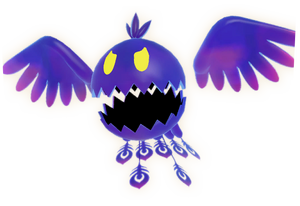