Akande Ogundimu, better known as Doomfist, is one of the leaders of the terrorist organization Talon. He is a playable character and the main antagonist in the lore of the 2016 video game Overwatch and its sequel Overwatch 2. He is also the unseen overarching antagonist of the animated shorts "Recall", "Alive" and "Infiltration".

He is voiced by Sahr Ngaujah.

Doomfist's cybernetics make him a highly-mobile, powerful front line fighter. In addition to handling ranged damage with his Hand Cannon, Doomfist can slam the ground with his Seismic Slam, knock enemies into the air and off balance with his Rising Uppercut, or charge into the fray with his Rocket Punch. When facing a tightly packed group, Doomfist leaps out of view, then crashes down to earth with a spectacular Meteor Strike. In game, Doomfist is a three-star difficulty Hero, meaning he is very difficult to master.

Akande Ogundimu was born into a well-regarded Nigerian family, heir to his prosthetic-technology company. A very intelligent and charismatic figure, Ogundimu helped expand his family's business and position it for the future while dedicating his free time to his first love: competitive martial arts. He has trained in traditional African fighting styles, including Dambe and Gidigbo, as well as in wrestling and other modern combat systems, incorporating the most effective techniques into their repertoire. Ogundimu competed in tournaments all over the continent, using his intuition and ability to read opponents alongside his tremendous speed and strength.

But when he lost his right arm during the Omnic Crisis, it seemed his martial arts career was completed before he had reached his prime. His company's cybernetic prosthetics allowed him to recover from his injuries, even making him stronger, but these enhancements rendered him ineligible for competition. He tried to devote himself to his business with the same zeal he had to fight, but he found nothing that could fill the void until he was given a new opportunity by Akinjide Adeyemi, better known as the second Doomfist, the Scourge.

Adeyemi offered Ogundimu the chance to fight with him as a mercenary. Initially wary, Ogundimu accepted, and discovered that he now had an arena in which he could unleash his enhanced capabilities. Eventually, Adeyemi brought him into the Talon organization. Talon's belief that humanity would be made stronger through conflict resonated with Ogundimu's personal experiences. Moreover, Talon's power struggles presented a new challenge that allowed him to use his talent in the boardroom along with his cunning as a combatant.

Adeyemi was a useful asset to Talon, but the organization saw far greater potential in Ogundimu, with his intelligence and his ability to inspire the leader. While Adeyemi was content to profit from raids on Numbani, Ogundimu had a great vision. This difference in aspiration would lead him to kill his teacher and take on the title of Doomfist, along with the tituar gauntlet.

As the new Doomfist, he rose high in Talon and helped to begin a conflict that the organization hoped would someday consume the world, even meeting with the leader of the extremist group Null Sector, forging an alliance between Null Sector and Talon. However, before their plan came to fruition, he was defeated and captured by an Overwatch strike team that included Tracer, Winston, and Genji after his fellow Talon leader Maximilien sold out his location to avoid being arrested by Overwatch. He was imprisoned in a maximum-security facility for years, where he waited patiently for the events he had incited to play out.

Finally, he felt that the time had come for him to return. He broke out of his prison with his bare hands and recovered his gauntlet in a one-sided battle with Numbani's newly unveiled OR15 defense robots, thus putting an end to OR15 program. Now, he has regained his place in Talon's leading council, ready to spark a war that will consume the world once again.

Doomfist presents himself as philosophical individual who is calm, collected, charismatic, and confident. He shows a fondness for battle, and is not afraid to terrorize and destroy in hopes that his plans of bringing humanity to its limits by creating a global conflict will one day rise through whatever means necessary. His philosophy and aggression coincide with each other, as he believes that only through conflict, humanity will evolve past what he considers stagnant prosperity. This makes him a delusional warmonger who will not hesitate to cause chaos to incite a global conflict through his influence and actions. To achieve the power necessary to set in place what he needs to do this, he has become a powerful leader and usurper of the evil organization Talon and uses his position and power to terrorize and destroy, staying faithful to his detestable beliefs. He did not hesitate to kill his former master, Akinjide Adeyemi, so that he could gain more power in the hierarchy of the evil organization and in physical strength.

Although he has questionable delusion, he is still highly intelligent and charismatic. His intelligence and calm and serious demeanor makes him even more potent, as he was able to make business decisions to strengthen both his family's business as well as Talon, and is able to use his intuition to predict movement and stay immune to distractions. As a former professional martial artist who has been mechanically modified with a gauntlet that gives him superhuman strength, Doomfist has a mean and arrogant personality, and is always serious, rarely light-hearted or scared of anything. These traits put together make him into a psychopathic supervillain bent on testing humanity to its very limits. As firm, callous, and high-functioning as he is, he is a game changer wherever he presents himself, and is bent on destroying anything that gets in the way of his methodology.

Doomfist is not hypocritical, as shown when he does not hate the Omnics for injuring him. He is a warmonger who accepts that his injuries were the result of war, a conflict that just like he believes will make humanity stronger, made him stronger. It is believed that because of this, Doomfist wishes that the Omnic Crises would continue.

Being one of Talon's leaders Doomfist had immense strength and durability. His physical strength was almost unrivaled, being capable of throwing cars with ease and creating craters with a single punch. His durablity was also astounding, being able to tank Tracer's pistols, Genji's sword, and even a hit from a primal Winston's punch and only be incapacitated. He was also no slouch in the speed department and he was capable of catching Tracer in the middle of one of her blinks and dodged Winston's Tesla cannon. 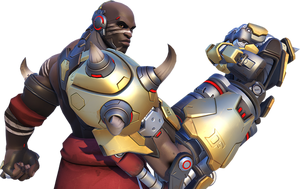 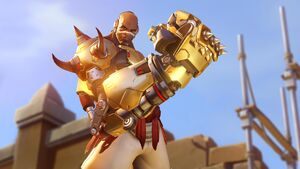 Doomfist as he appears in his animated short 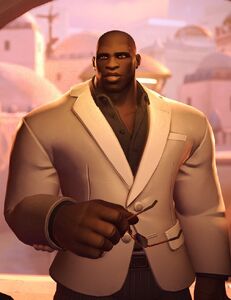 Doomfist speaking to the leader of Null Sector 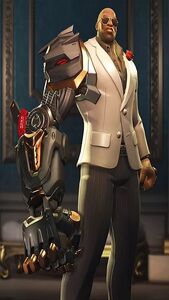 Doomfist in his formal attire
Add a photo to this gallery 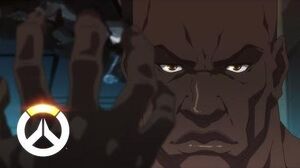 Retrieved from "https://villains.fandom.com/wiki/Doomfist?oldid=4383927"
Community content is available under CC-BY-SA unless otherwise noted.