NOTE: This article is about the incarnation of Doomsday from the DC Extended Universe film series. The mainstream version can be found here: Doomsday.

The Devil (by Lex Luthor)

The Desecration Without Name

Draining energy.
Destroying everything in their way.

Aiding in winning the Last War at Krypton
Luthor's Doomsday:
Kill Superman (succeeded, but failed when he is later resurrected by one of the Mother Boxes).
Kill Batman and Wonder Woman.
Wipe out all of humanity and destroy all life on Earth.
Kill anyone who stands in his way (all failed).
Destroy Metropolis at all costs (succeeded).

Doomsday is a destructive and primitive Kryptonian creature born from genetic experimentation that appears as the final antagonist of the 2016 DC Extended Universe film Batman v Superman: Dawn of Justice and as a flashback antagonist in 2021's Zack Snyder's Justice League.

There are in fact two Doomsdays; the original Doomsday bio-engineered by Bertron during the Last War at Krypton and recreated version of the beast by the criminal mastermind Lex Luthor in order to kill Superman inspired by the former.

He was voiced/portrayed by Robin Atkin Downes, who also voiced Abomination in Iron Man & Hulk: Heroes United, Deathstroke in Beware the Batman through motion capture, Travis Touchdown in the No More Heroes series and Medic in Team Fortress 2.

Not much is known about the original Doomsday but, it can be inferred that the monster is just as deadly and violent as its successor Luthor's Doomsday.

Doomsday is an extremely violent, ferocious, and aggressive being with an insatiable bloodlust, which makes him a threat of apocalyptic proportions. Hence, when describing Doomsday to Lex Luthor, it claimed that the monster was so hateful to sight and memory that it would only refer to it as "the desecration without name." However, due to Doomsday's feral mind, he has limited intelligence, being unable to tell the difference between friend and foe, attempting to kill his creator Luthor right after emerging from the Genesis Chamber, and he thus owes allegiance to no one but himself.

Therefore, while incredibly dangerous, destructive, and temperamental, Doomsday is relatively quickly outsmarted by Batman. The Caped Crusader baits the monster into following him, which allows Wonder Woman to get a hold of Doomsday with her lasso. Batman momentarily weakens the monster with a Kryptonite gas grenade, giving Superman the opening he needs to deliver the killing blow to Doomsday, with the Kryptonite spear. However, Doomsday's bloodthirstiness allows the monster to seemingly murder Superman in his death throes.

The original Doomsday, Bertron's Doomsday, was created by its namesake Kryptonian scientist in order to put an end to Last War, a conflict that took place long prior to Krypton's destruction. Bertron's Doomsday instead caused catastrophic damage and deaths that its creation would forever be deemed a curse to Kryptonian history. In fact, the monster managed to reduce one of Krypton's moons, Wegthor, into several huge chunks. Subsequently, the Council of Krypton managed to defeat Bertron's Doomsday somehow, though that might be not the end of it owing to its immense powers.

In the present day, however, a new Doomsday, Luthor's Doomsday, is created by Lex Luthor. After getting permission to access Zod's corpse, Luthor secretly cuts off one of Zod's fingerprints and uses it to activate the Kryptonian ship. There, he accesses the ship's database during which the criminal mastermind learns about the existence of the original Doomsday. Inspired to create one as the contingency plan for his goal of killing Superman if Batman is to fail, Luthor begins the forbidden Kryptonian genetic engineering technique by cutting his own hand and dripping the blood on Zod's corpse that has been inserted into the ship's surviving genesis chamber against the protests from the ship's service android.

Luthor's Doomsday is revealed by Luthor when he is confronted by Superman. Upon awakening, the new Doomsday tries punching his creator, but then Superman blocks the punch and their fight begins. Superman and Luthor's Doomsday engage in a fight, and Luthor's Doomsday quickly has the upper hand. The United States military fire missiles upon the monstrosity, who counter reacts by unleashing an electric blast to wipe them out. Superman then hurls Luthor's Doomsday up into outer space, where they are hit by a military-fired missile, to no avail. Batman intervenes using his Batwing and his FN MK 13 grenade launcher and plans to lure Luthor's Doomsday back to Gotham so he can kill it with his Kryptonite spear. Luthor's Doomsday shoots down the Batwing with his eye lasers and prepares to kill Batman until suddenly Wonder Woman shows up and uses her shield to deflect Luthor's Doomsday's heat blasts, just in time for Superman to return from space to hurl Luthor's Doomsday into explosives and therefore the three are united for battle.

Mutated Kryptonian Physiology: As a bioweapon to put an end into Last War at Krypton, Bertron's Doomsday was created as a being with unfathomable stores of power and capacity for destruction.

Mutated Kryptonian Physiology: Luthor's Doomsday, due to being the genetic amalgamation of General Zod (from his corpse) and Lex Luthor (from his blood), is a being of tremendous power, of potentially apocalyptic proportions, thereby being the only known being to surpass the power and might of Superman himself. Thus, Lex Luthor creates him for the sole purpose to killing Superman, naming the monster "[Superman's] Doomsday", and claiming that Superman was "as good as dead" if he were to fight his Doomsday. Indeed, the monstrous juggernaut's unparalleled might forced Superman to team up against it with Wonder Woman and Batman in order to stand a chance, yet even that was insufficient, as Luthor's Doomsday's ability to "evolve" and regenerate at a rapid pace made him impossible to be brought down with brute force alone, so while Superman managed to ultimately bring him down (with a Kryptonite spear), he only succeeded by seemingly dying himself in the process. 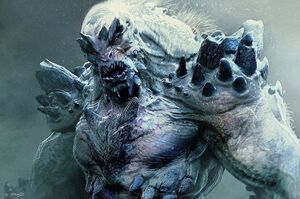 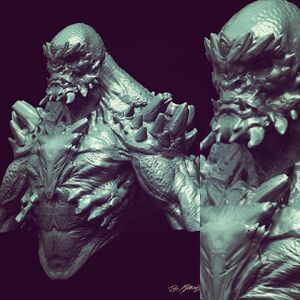 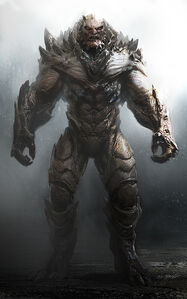 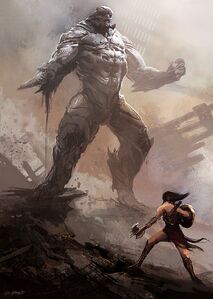 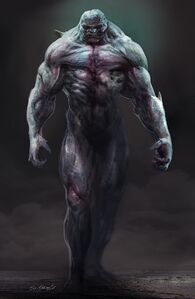 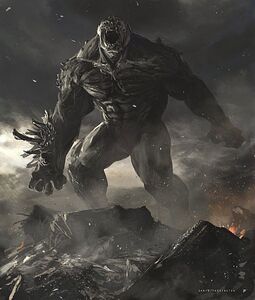 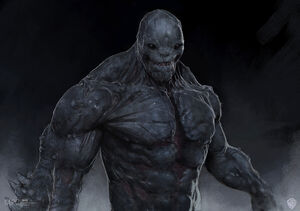 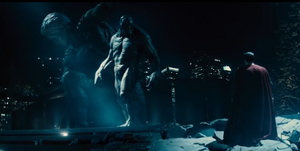 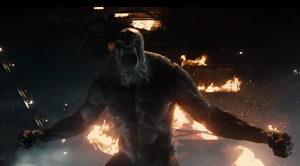 Doomsday's angry breakdown as he roars at US Army attack helicopters.

Doomsday leaping into the sky. 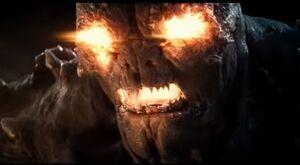 Doomsday about to kill Batman.

Doomsday's death at the hands of Superman.