Kill the main-universe Superman (both failed)

Doomsday is a supporting antagonist of the Injustice: Gods Among Us video game and minor antagonist in the comic series of the same name. He is also set to appear in the animated film adaptation simply titled Injustice.

He is an ancient Kryptonian monster who despises all life and desires to eradicate it and Superman's deadliest enemy, until the Man of Steel became a brutal, fascist and insane tyrant and Doomsday ended up being imprisoned and controlled by Superman for the One-Earth Regime's own benefits.

He was voiced by Khary Payton, who also voiced Cyborg in the same franchise.

While this universe's Doomsday's origin is unknown, it is likely that he followed his mainstream universe's origin.

Doomsday appears as a hallucination when Superman was exposed to the Joker's fear toxin. Not wanting his family to be in trouble, Superman then drags Doomsday into space until realizing that he was hallucinating the whole time as the effect wears off. Superman then quickly realizes it was Lois Lane's lifeless body the whole time which eventually leads to the destruction of Metropolis.

Doomsday makes his first actual appearance on Year Five where he was seen descending from space to kill Superman. The impact had also caught, the Flash whose leg got fractured in the process. The two began fighting on their way where they end up trading hits at each other at the docks of Gotham. Bane was seen on a distance, noting to himself that he was late to the party before interfering with the fight. As much to Wonder Woman's horror that Superman might not stood a chance, Bane surprisingly hits Doomsday, helping the Man of Steel to defeat the indestructible beast.

As rehabilitating the monster proved worthless, Superman orders Lex Luthor to devise a collar that controls Doomsday. He was seen clashing with Bizarro, which was tricked by Lex to be sent into the Fortress of Solitude earlier. Although, Doomsday almost lost the fight against Bizarro, Superman intervenes and hits Bizarro. Lex then changes his attack protocol to "All", causing a mind-controlled Doomsday to attack Superman as well, eventually being overwhelmed by his two enemies. As Cyborg reports the situation, Lex feigns that his presence might confuse the programming.

The Flash arrives to get Superman to safety, but Doomsday broke Bizarro's neck, as much to Superman's horror who wanted to keep him alive.

After the destruction of Metropolis, Doomsday has been imprisoned for five years by the Superman regime to try to educate the monster through the Phantom Zone, but the methods were ineffective. So Superman devised a necklace that allows him to control his movements, being used as a weapon of last resort for One-Earth Regime's.

When Superman kills Lex Luthor and Shazam, he orders Flash and Yellow Lantern to prepare Doomsday for the impending attack on Metropolis and Gotham. Later, Doomsday appears assisting in the attack on Metropolis, knocking down buildings one after another with a single header.

In the end, Doomsday attacks Superman from the main universe, but is taken to the Fortress of Solitude by Superman to fight him.

Doomsday is eventually defeated by Superman and thrown into the Phantom Zone.

In Doomsday's ending, Doomsday used technology in the Fortress of Solitude to terraform Earth into the image of prehistoric Krypton. Eventually, Doomsday departed Earth seeking a challenge and finding it in form of the intergalactic mercenary Lobo.

Doomsday evolved to possess almost limitless superhuman strength that allowed him to kill almost anything in his path with his bare hands, a body and mind completely invulnerable to pain, having bone tips protruding from various points on his body that he can use to impale his enemies for devastating attacks, and the most dangerous ability of all, reactive adaptation: even if something or someone is able to kill him, Doomsday will heal and recover, evolving even more, becoming stronger still, doing what killed him once be unable to kill him again. 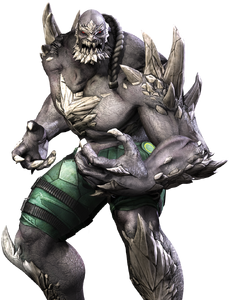 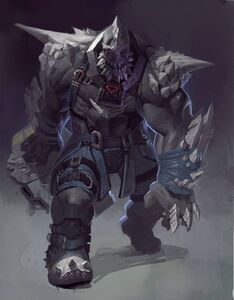 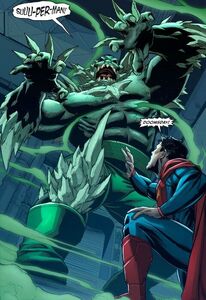 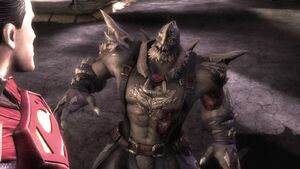 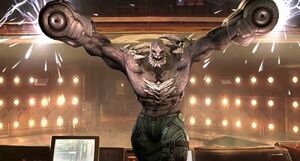 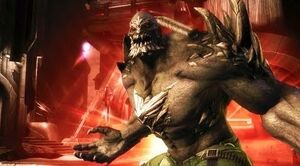 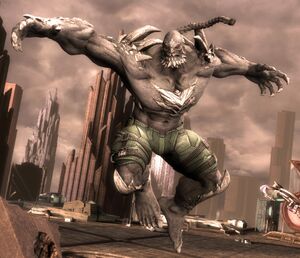 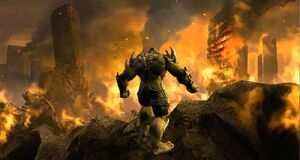