The Ultimate Destroyer
The Traveler
The Cornfield Killer

Kill anything that stands in his way (somewhat succeeded).

Find Clark Kent and kill him.
Be with Chloe (all failed).

Doomsday, also known as Davis Bloome, is a major antagonist appearing on the CW TV series Smallville, serving as the main antagonist of the show's eighth season.

He was portrayed by Sam Witwer, who also portrayed Ben Lockwood in Supergirl, Mr. Hyde in Once Upon a Time, Starkiller, Dark Apprentice, Darth Maul and the Son in the Star Wars franchise, and Neil Perry in Dexter, while Doomsday was portrayed by Dario Delacio.

Doomsday was created on the planet Krypton through genetic engineering, by combining the DNA of the planet's strongest and most violent creatures with the DNA of Zod and Faora. After Doomsday was created, Zod and Faora attached him to the spaceship carrying Jor-El's son Kal-El; they intended for their "son" to kill Kal-El, the son of Zod's friend-turned-enemy Jor-El.

Doomsday arrived the day of the 1989 meteor shower that hit Smallville, Kansas, crash-landing along with Kal-El in Miller's Field. He was inside a burnt cocoon that hatched moments later, releasing genetic matter liquid that shifted into the appearance of a young, naked dark-haired boy.

The boy witnessed Jonathan and Martha Kent take Kal-El and walk out of Miller's Field.

The boy was then captured by Lionel Luthor's search team and kept at the Luthor Mansion. Lionel, believing the boy was a mysterious being known as "The Traveler," put the boy through a series of tests to see if he was indeed The Traveler.

One day, the boy came across Lionel's son Lex Luthor, and the two of them became friends. As the two were playing, the boy was accidentally exposed to a chunk of kryptonite, which caused him considerable pain.

Eventually, Lionel found out that he had the wrong child and that he wasn't The Traveler, so he decided to send some of his men to take the boy and abandon him in the streets of Metropolis. Saddened, alone, and angered, the boy transformed into Doomsday and killed them all.

Sometime later, after regaining his human form, the boy was adopted and named "Davis Bloome". It was also implied that Davis was raised in five foster homes between the 1990s and 2006. Bloome went to Lowell County High School and received his paramedic training at Metropolis General Hospital.

He later told Chloe that he had experienced blackouts ever since he was little and that, because of it, he felt like an outsider and did not feel comfortable staying in one place too long.

By 2008, Davis had become an EMT in Metropolis, where he encountered a young woman named Chloe Sullivan, whom he soon developed a fixation with. They first met when a bus exploded outside the Daily Planet and helped a young girl named Bette Sans Souci. He quickly befriended Chloe after she helped him examine Bette.

Around this period, there was also reports of a mysterious monster, running around the city and killing people. Davis soon begun to suspect that he might be the monster. At the hospital, Davis offered to send Bette to a place where she could be taken care of, but Bette refused. He was also the first one that Chloe revealed her engagement to after the two became close.

Chloe also revealed that she researched Davis and found out that his parents were dead and he ran away from numerous foster homes. Around this time, reports of horrific murders supposedly carried out by some kind of monster were circulating around the city.

Davis began to suspect that he might be the monster when he woke on the street outside, lying on the ground trembling and mutating back to human form: he woke up screaming soon after.

While mutated as Doomsday, Davis went to the Ace of Clubs, where he went on a rampage, killing several innocent people before mutating back to his normal self. Clark arrived on the scene and found Davis unconscious and covered in blood.

Davis later awoke on a stretcher and was dazed and unaware of how he got there. He then got up and left, going back to Metropolis General where he took a shower and found that all the blood on him was not his and crouched down in despair, wondering what he had done.

When Faora escaped from the Phantom Zone, she began looking for her son while inhabiting Lois Lane's body. Her search led her to Davis, who was attending to a little boy at the Metropolis General.

Faora revealed to Davis that he was the son of herself and Zod and was brought to Earth attached to a Kryptonian spaceship as genetic material. Davis was confused by all of this, to which Faora remarked that he hadn't evolved far enough before she impaled him with a metal pole she ripped off a gurney, killing Davis.

Davis came back to life later on and attempted to stab himself again, but this time, his skin was resistant and shattered the blade.

During all this, the Brain InterActive Construct began to use Davis' feelings for Chloe to bring about Doomsday. As Chloe's wedding to Jimmy was near, Davis blacked out again and brutally killed 2 people and tried calling her for help. 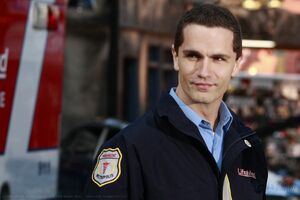 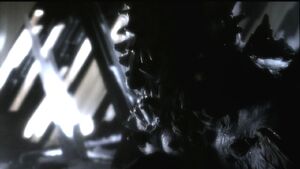 Doomsday fully transformed in the Fortress of Solitude. 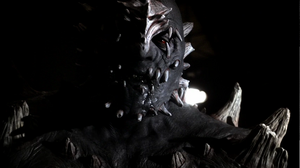