Eradicate All Life in the Universe

Homocidal Alien
Doomsday is a villain from the extended DC universe, that made a cameo appearance in the Teen Titans Go! episode, "The Great Disaster".

In "The Great Disaster", Doomsday was destroying Jump City and the Teen Titans faced off against it. Robin claimed that by taking down a villain that is normally fought by the bigger superheroes, such as Superman, the Teen Titans would promote themselves and become even better superheroes in the public eye. Robin went on and on about how this battle will make history and that he and the other the Titans will be telling their grandchildren the story of the epic battle of the ages that was about to commence.

Just when the Teen Titans were about to go, Hawkman flew onto the streets and fought Doomsday, himself in a series of back and forth attacks. The Teen Titans found that they would be completely pointless in this battle, so they sat back and watched as Hawkman handled everything. Although they were disappointed in the fact that they would not be fighting this epic fight, they were still entertained by watching Hawkman fight the epic fight.

The rest of Doomsday's story was framed with an elderly Bumblebee in the future telling her grandchildren the story, just like Robin mentioned before. Bumblebee said that it took Hawkman a total of four days to defeat Doomsday and that after the battle, Bumblebee and the other Titans got the privilege of meeting Hawkman and getting autographs and selfies with him and that this was the story of how she met Hawkman. The actual downfall of Doomsday was never actually shown onscreen, as it was only told verbally by Bumblebee, to her grandkids. 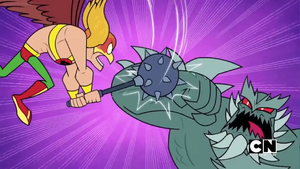 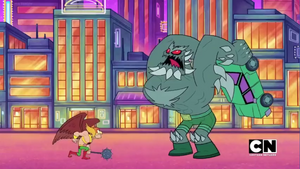 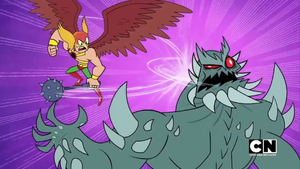 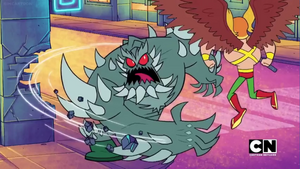 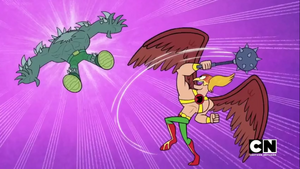 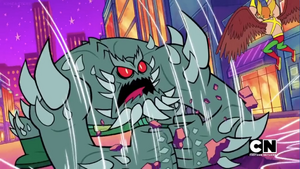 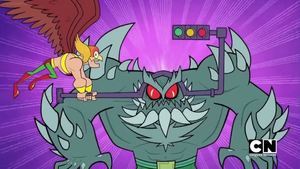 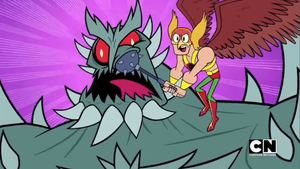