Owner of the Creepy Steeple (formerly)

Turning the townspeople of Twilight Town into pigs (formerly)

Shapeshifting for his own amusement.

Keep turning the townspeople of Twilight Town into pigs for his own amusement (formerly).

Doopliss is a major antagonist in Paper Mario: The Thousand-Year Door, appearing as the main antagonist of Chapter 4 and a supporting antagonist in Chapters 6 and 8.

Doopliss is a Duplighost, a creature who has a sheet ghost-like appearance, and has a special power which allows him to duplicate anyone he likes. This is special in the sense that when he does this, he can steal not only their looks, but also their name as well. The person that he duplicates then becomes a shadowy figure of themself and cannot be identified by their friends, family, or enemies (except of course for Doopliss himself). This was first demonstrated when Mario and his partners beat Doopliss for the first time.

During their quest for the Ruby Star, Mario and his partners noticed the people of Twilight Town turning into pigs when the sound of a bell was heard. Mayor Dour told them that the sounds are a curse produced in Creepy Steeple and asked them to find out who is causing the curse. Once there, Doopliss revealed himself as the main cause of producing the sounds. This starts a battle between Mario and his partners and Doopliss. When Doopliss is beaten, Mario goes back to the new town he came from. Unknown to Mario's friends though, this was not Mario, but Doopliss disguised as him, who stole his body right before he was defeated.

The real Mario, who looked like a shadow, went back to the town, but before he got there, he was ambushed by Doopliss Mario, who told him that if he correctly guessed his real name, he would give Mario back his appearance and identity. If Mario guesses wrong (which is guaranteed to happen since even if the player knows it, they are missing the letter "p" needed to spell his name properly), he would face Doopliss in battle. Doopliss had an HP count of 40. When this happens, even though he demands that the player doesn't run away, they have no other choice but to do just that, because now Mario's attacks were futile against him, and similarly, Doopliss' attacks have no effect on Mario, resulting in a stalemate.

When Mario got back to town, he ran into one of the Shadow Sirens named Vivian, who was looking for a Superbombomb. Once Mario found it for her, she was thankful for him going out of his way to help her despite his own problems and decided to return the favor by joining him and helping him get his identity back. Of course, Vivian had no idea who she was helping until the final time Mario faced Doopliss. When Mario guessed Doopliss' name wrong upon the latter confronting him again as he left town, Mario once again had no choice but to run away from the fight. When Mario and Vivian reached Creepy Steeple again they decided to find the person who knew Doopliss' real name. This "person" was actually a parrot.

When Mario and Vivian reached Doopliss again, he asked them to guess his name. When inputting Doopliss, the player must do it exactly like this: D-o-o-p-l-i-s-s, only without the little dashes. When Mario guessed Doopliss' name right, he freaked out due to his spell being undone, and hid in the top tower of the Creepy Steeple yet again where he was first fought. For this battle, however, Doopliss was joined by Mario's friends except for Vivian since his disguise managed to fool all of Mario's friends. However, Mario knew that this guy was a fake and manages to defeat Doopliss for real with Vivian's help. Once Doopliss was defeated, he became regular Doopliss again and fled. He runs into the Shadow Sirens shortly after this.

Doopliss was later spotted again on a train headed for yet another of the Crystal Stars. Here, he disguised himself as a celebrity named Zip Toad who threatened to yummify the train with a special bomb made from combining a special syrup with calcium and gold if Mario went to Poshley Heights, the location of one of the Crystal Stars. He had become a member of the Shadow Sirens at this point. Mario caught Doopliss before he could carry out the threat, and when he did, Doopliss attempted to flee and succeeded when the train stopped to refuel.

Doopliss is found the third time in the Palace of Shadow, where he is fought yet again, but this time, along with the Shadow Sirens, though Beldam treats him badly similarly to how she treated Vivian, and demeaningly calls him a Freak-in-a-sheet. However, Mario once again defeats him and the Shadow Sirens. Later, he is seen alongside the Shadow Sirens rooting for the Shadow Queen.

After the Shadow Queen's defeat

After the Shadow Queen was defeated, he fled alongside the other Shadow Sirens from the Palace of Shadow. It was later revealed that Doopliss renounced being a prankster and was hired by Flurrie to be an actor along with her, and now both are working on the stage where Doopliss plays Mario, because he enjoys being him. 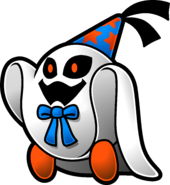 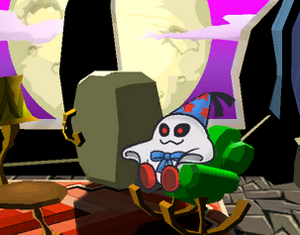 Doopliss sitting in his chair. 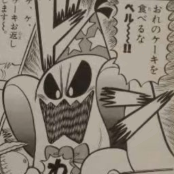