To ensure the United States victory in the Vietnam War (failed).

Kill as many Vietnamese person as possible (partially succeeded).

The Door Gunner is an minor but infamous unnamed antagonist in the famous anti-war film, Full Metal Jacket - while most of the characters in the film are morally flawed and capable of being seen in varied lights depending on the viewer's own sense of ethics, the Door Gunner is notable for being a violent mentally unstable sociopath with little redeeming qualities, despite his small appearance in the film.

He was portrayed by Tim Colceri.

The Door Gunner is an unnamed combatant in the Vietnam war who is introduced as a homicidal maniac who makes a hobby out of randomly opening fire on any civilians he comes across - often quoting his infamous catchphrase of "get some" as he kills his victims : as he massacres civilians Joker watches in silent horror, after a while the Door Gunner happily converses with Joker saying that he should interview him and shows great pride in killing many Vietnamese.

The Door Gunner is not heard of again in the film. 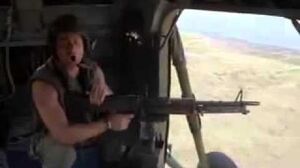 Get Some! Ain't war hell?
Add a photo to this gallery
Retrieved from "https://villains.fandom.com/wiki/Door_Gunner?oldid=3927035"
Community content is available under CC-BY-SA unless otherwise noted.