A Gaia Memory is a mysterious device resembling a USB flash drive that contains all of the Earth's knowledge of what it represents. This enables its user to become a Dopant, or in some special cases, a Kamen Rider. Every Gaia Memory is adorned with the first letter of its name, stylized to reflect the powers it imbues on its user. For example, the Injury Memory (acquired by Shotaro and Philip before the series begins) resembles a broken bone in the shape of the letter I. Each Memory also features a button which when clicked causes the Memory to loudly declare its name; while this is traditionally done immediately before inserting the Memory by Riders and Dopants alike, it is unclear if it is actually mandatory to activate the Memory's powers. In order to transform into a Dopant, the Gaia Memory is first inserted into a device called the L.C.O.G (the acronym for "Living Connector Setting Operation Gun", though normally called called a Connect Shooter, which then produces a USB port-like tattoo on the user's skin called a Living Connector. Whenever the Gaia Memory is pressed onto the Living Connector, it enters the user's body and transforms the user into a Dopant. Use of a Gaia Memory without a Living Connector is possible, but the side effects of doing so are nearly fatal.

This direct insertion will eventually drive its user insane from its addictive influence, which is why special belts called Memory Drivers have been developed for use by high ranking members of the Museum to filter out these and other side effects. This has the side affect of visibly weakening the Dopant's powers. Due to this, Museum members use some of the strongest Gaia Memories ever created to more than compensate the loss of power.

To defeat a Dopant, a Kamen Rider has to use one of his Maximum Drive finishing attacks to eject and destroy the Gaia Memory, resulting in what is called a Memory Break'. Evolved Gaia Memories, however, require a direct strike on its location within the Dopant's body to execute the Memory Break without the risk of killing the user. If the Dopant does not have a Living Connector, a Memory Break will not occur, however the Gaia Memory will still be ejected from the user's body. In order to defeat a Dopant that uses a Memory Driver, the belt must be broken in order to defeat the Dopant and cause the Memory Break.

In the movie Double Forever, the Dopants use T2 Gaia Memories, 26 special Gaia Memories developed by Foundation X based on Fumine Sonozaki's findings. Though originally in the possession of Jun Kazu before giving it to another member of the Foundation to take to their headquarters, the T2 Gaia Memories end up in the possession of mysterious terrorist group NEVER. Unlike the original Gaia Memories, these memories appear to have some sentience, injecting themselves into people who are compatible with them (Watcherman and Santa-chan) or causing a Living Connector to appear on someone's skin (Queen). Other than their leader, each member of NEVER uses a T2 Gaia Memory based on one of Kamen Rider Double's Gaia Memories.

Though they weren't part of Dai-Shocker initially (as Kamen Rider W is a post-Decade show), at least one Dopant, the Weather Dopant, was part of the revived Dai-Shocker assembled by Decade to wipe out the Super Sentai, ensuring the survival of the Kamen Riders. After Dai-Shocker's alliance with Dai-Zangyack was revealed, both organizations were wiped out by a gathering of Kamen Riders and Super Sentai.

Several Dopants, along with Yummies, Zodiarts, and Phantom, were part of the Monster Army, a hoard of kaijin who were revived by the Akumaizer to conquer humanity. They were defeated by a group of eight Kamen Riders consisting of Kamen Rider Wizard, Fourze, Meteor, Nadeshiko, Double, Accel, OOO, and Birth. 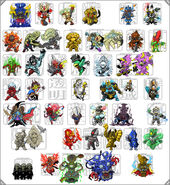