Ability to create evil objects with his notebook

Creating things with his notebook

Cause chaos and spread evil (both failed and abandoned)

Doppelganger is the evil twin version of Maxwell. His different appearance features are that he wears a blue rooster helmet instead of a red one. He wears a red shirt with a yellow star on it, green shorts and red shoes.

Unlike his counterpart, Doppelganger is a very mischievous and manipulative person who likes to chaos mayhem with his notebook. However, in the ending of Scribblenauts Unmasked, he redeemed himself after Maxwell created a sister for him to help know that Brainiac was using him.

Doppelganger has the same powers as Maxwell as he has a notebook to help him create evil things that causes mayhem.

Doppelganger made his first appearance in the first Scribblenauts. In this game, whenever he is created, he steals the objects that you create and keeps them for himself. Whenever Maxwell is holding something, he tries to take it from him. Whenever he comes in contact with somebody else, they run and scream from him as he chases after them and tries to attack them.

In the game Super Scribblenauts, Doppelganger returns again with a notebook of his own that he uses to create a bunch of different random objects. He does this because of all the objects he stole in the previous game. He tries to steal Maxwell's notebook whenever he doesn't have one for himself. He also serves as the final boss. In the final level, Doppelganger gets into a U.F.O. and starts abducting the objects and animals of Earth, and the player must chase after him and destroy him with Starites. After he is defeated, he will die and drop dead on the moon and the player will take his Starite, which is the final one in the game.

Doppelganger appears again in the game Scribblenauts Unlimited. He has apparently come back to life in this game and he has the ability to create his own objects with his notebook again. Unlike in the previous two games, people do not react to Doppelganger as a villain or thief anymore and he never attacks anybody. The player can turn him into an evil thief if you equip the adjective "evil" to him.

In the game Scribblenauts Unmasked: A DC Comics Adventure, Doppelganger serves as the central antagonist throughout the entire game. In this game, Doppelganger works alongside Brainiac. In the final stage, Doppelganger and Brainiac appear before Maxwell and the Justice League at Brainiac's ship after Cyborg and Lilly appeared with the globe. Brainiac took the globe away from Lily and attached it to his device. He then teleported all of their villainous accomplices away, along with a majority of the Justice League. As Superman took on Brainiac, Batman, Wonder Woman, Lily, and Maxwell tries to grab the globe, only to encounter another Brainiac, who tried to teleport Maxwell and Lily, but had no luck at it. After seeing this, Batman realizes the key to defeating Brainiac and was about to tell it to Maxwell but was then teleported away. Brainiac explained to Maxwell and Lily that he hacked into Cyborg, in order to fool Lily to hand over the globe after Doppelganger's incompetence. Doppelganger tried to reason them, saying he tried his best, only for Brainiac to tell him it was insufficient. Brainiac then continued to explained to Maxwell and Lily that there is a multiverse, each with its own Brainiac, and he planned to bring all of them together to exterminate all life as there were now six Brainiacs. Brainiac still saw some use in Doppelganger, so he ordered Doppelganger to protect him as he calls him a friend. Doppelganger, on the other hand, became confused as he said he felt incomplete. Just then, Lily realizes that Maxwell was missing something: her. So, Maxwell created an alternate version of Lily for Doppelganger, named Doppelily. Doppelganger then realizes that Brainiac was using him. He used his powers of his notebook to distract Brainiac, while Maxwell and Lily fixes Cyborg, who tells them Brainiac can only teleport people from his dimension away. But as soon as he was about to Maxwell the key to defeating him, he was also teleported away. Just then, Doppelily came up with an idea to summon heroes from other dimensions. 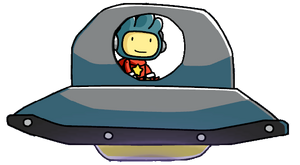 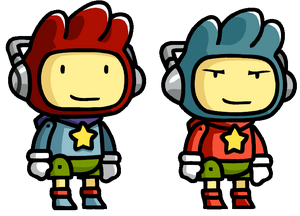 A comparison of Maxwell and Doppelganger. 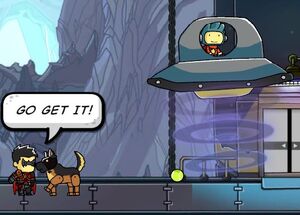 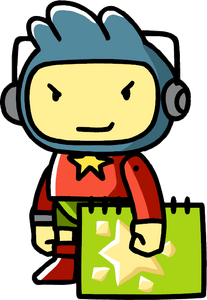 Doppelganger in Scribblenauts Unlimited.
Add a photo to this gallery

Retrieved from "https://villains.fandom.com/wiki/Doppelganger_(Scribblenauts)?oldid=4323004"
Community content is available under CC-BY-SA unless otherwise noted.