Trying to get rid of Arle.

Kill Arle and take her place.

Doppelganger Arle, or Doppel for short, is a minor antagonist in the Madou Monogatari dungeon crawler roleplaying game series and a major antagonist in its spinoff, the Puyo Puyo series of tile-matching puzzle games. As her name suggests, she is a copy of the series heroine Arle Nadja, who she seeks to destroy and replace.

Doppel is a regular enemy in the MSX, PC98, and Game Gear versions of Madou Monogatari I. The Mega Drive version includes a specific Doppel named Warle who enjoys causing mischief. In Madou Monogatari: Final Exam, Doppel is fought as a boss in the final dungeon before the Gem Guardians and Phantom God.

According to the Shin Madou timeline, Doppel is actually a split part of Arle's soul following her battle with Satan. After Satan was forced to reset the existence of the Madou world in replacement for a new world, he mistakenly only obtained half of her soul to be the entirety of Arle's essence. The other half of Arle's soul, which would ultimately become Doppel, was left to wander the empty dimensions for hundreds of years, dwindling her sanity and hatred for the other Arle.

Doppel appears in the game as the main antagonist and final boss. She was brought to the new Madou world (aka the Puyo Puyo world) when Satan found and opened a box hidden in the archives of his library, a box created by Doppel's unsuccessful attempt to escape her realm. Inside the box was Doppel, now free from the hundreds of years she spent in the emptiness of space. Because Satan has a strict policy on no copies of a singular person in a world at a time, Doppel used her magic to brainwash him so he could not erase her.

Under her Pierrot disguise, Doppel uses Satan to trick Carbuncle into performing in an act at the Puyo Circus, only for him to disappear following the performance. Arle goes on a search for her friend, fighting against the members of the circus, who were also under the control of Doppel. At the end, she encounters Pierrot, who reveals her true form and engages Arle in a battle of Puyo Puyo. Doppel offers to release Carbuncle if Arle wins, but if Arle loses, she will become Doppel's permanent slave. Fortunately, Arle manages to defeat her doppelganger. Upon defeat, Doppel experiences a breakdown, screaming that she is the real Arle before Satan fades her away, which also frees Carbuncle from his imprisonment.

Doppel and Pierrot can be playable in multiplayer after clearing story mode.

Doppel appears as one of the final opponents in the 20 and 30-man Scramble mode gauntlets, appearing after Schezo Wegey in both instances. She uses the Puyo Puyo rule in the 20-man course and the yon rule in the 30-man course.

Doppel is the 20th and final opponent in the Nazo Puyo story mode. In the remade version of the story mode in Super Nazo Puyo: Rulue no Roux, Doppel is instead replaced by Rulue.

Doppel returns as a special grant red card introduced in occasion for the game’s first year anniversary, obtainable via inviting friends. She has the same ID number as Jarne, Panotty, Chico, and Incubus, although her skills and stats are very different. Pierrot is also obtainable and has the same stats as Doppel, although her rating is only three or four stars while Doppel always has five. A stronger variant called Dusklight Doppelganger Arle can be obtained as six stars.

Doppel makes a cameo in the game as an icon.

In the earlier games, Doppel's appearance is a replica of Arle's, only with very minor details to tell the two apart, such as her armor being flipped. In the later games, the differences between the two are more clearer; her hair color is darker than Arle's brunette coloring, her clothing is colored red compared to Arle's blue, and her eyes are red while Arle's are yellow.

As an evil clone, Doppel's personality is the complete opposite of that of Arle's. She is driven only by hatred and envy of Arle's existence, believing herself to be the real Arle, while the real Arle is thought to just be a decoy. She will take any risk and effort to get rid of Arle, caring little about who or what she will damage in the process.

Before the incident that caused Arle's soul to split, Doppel's personality was assumed to be the same as Arle's cheerful tone. After being forced to spend 500 years trapped within an empty decaying world, she has gone mad from the centuries of isolation. 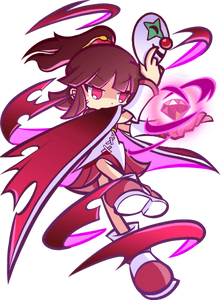 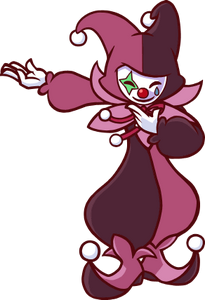 Doppel in disguise of Pierrot in Puyo Puyo!! Quest. 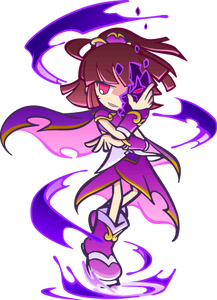 Dusklight Doppelganger Arle.
Add a photo to this gallery

Retrieved from "https://villains.fandom.com/wiki/Doppelganger_Arle?oldid=3897924"
Community content is available under CC-BY-SA unless otherwise noted.