Use of a Freeze Gun

Rid Gotham of all vigilantes and masked criminals (all failed)

She was so bent upon ridding Gotham of the "costumed freaks", she became what she hated the most: a female version of Mr. Freeze, the very man she hated for taking her sister away, and not letting her "die" in peace; Dora never realized, until it was too late, that if it wasn't for Freeze's obsession with curing his wife, Nora wouldn't be alive today.

Dora and her sister Nora were inseparable until Nora met her future husband, Victor Fries. Though Dora was resentful towards Fries, she tried to be happy for the pair. However, when Nora became terminally ill, Dora felt that her sister should be allowed to die in peace. Victor, on the other hand, would not allow it. During Ferris Boyle's attempted shutdown of Nora's stasis unit, he became drenched in chemicals that altered his biological state so that he was forced to wear an environmental suit that would sustain him in a constant cold state. Because of this, Fries became known as the criminal Mr. Freeze. Meanwhile, Dora became enraged and wanted to put away all costumed villains for good. Despite Nora's recovery as a result of Fries' technology, Dora pursued her mission by becoming a secretary for the Police Commissioner of Gotham City, James Gordon. She settled in and became friendly with Barbara Gordon, the commissioner's daughter.

Dora then set her plans into motion. After looting the Special Crimes Dangerous Evidence Vault, she discovered a Polarity Ray. With the Polarity Ray, Dora made all men in Gotham City vanish. As chances had it, Catwoman attempted to loot the vault the same night. Detective Selma Reesedale went to investigate and found Catwoman there with the entire vault littered with evidence. Selma, being an undercover detective under the guise of a woman, vanished with the men, and Catwoman was framed for "her" disappearance.

With the men gone and so more 90% of the criminals gone, Dora's plan was taking shape. With the new Commissioner and Mayor, attention was diverted away from her. Her plan did not include the possibility that someone else might obtain Mr. Freeze's Polarity Ray. Harley Quinn and Poison Ivy broke into the vault and stole it, among other things. When confronted by Batgirl and Catwoman (who wanted to clear her name of the kidnapping charges), Harley Quinn reversed the polarity, bringing all the men back. When Dora saw the Commissioner had returned, she immediately kidnapped him and replaced him with an android.

The android was programmed to authorize hunting down of all costumed criminals. With the change in the commissioner, the lack of sympathy for any life, Batgirl, as Barbara Gordon, confronted the android and destroyed it by throwing Bat-A-Rangs at it, tipping it into the Bat-signal. Dora had taken Gordon to Gotham Ice Cream Industries where she kept him in a chronogenics chamber. Batgirl had figured her location with Detective Montoya. Montoya broke in but Dora, using Freeze's own technology, froze her inside of her car. Batgirl came in after and subdued Dora briefly. She managed to break free (unaware that doing so would open Gordons chamber and revive him). With her enhanced strength, due to Freeze's gauntlets, she fought Batgirl and held her, with her desires of the costumed villains destroyed poured out. Gordon was revived and told her that if it wasn't for Freeze then Nora would be dead by now. Dora refused to believe this. When told she was just like Mr. Freeze, just in a different costume, she denied it. She backed up on the catwalk she was standing on and fell into a bath of chemicals, similar to that her brother-in-law fell into years prior.

Dora was locked up in Arkham Asylum, under "cold storage".

Dora as an secretary. 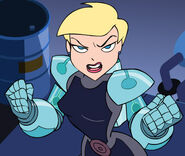 Dora fighting Batgirl.
Add a photo to this gallery
Retrieved from "https://villains.fandom.com/wiki/Dora_Smithy?oldid=3969029"
Community content is available under CC-BY-SA unless otherwise noted.