The Picture of Dorian Gray

Eternal youth
Self regeneration (in some medias)
Wealth
Charisma

Having sex with various girls and men.

Smoking opium.
Discovering the world on his own.
Searching for new experiences.

Dorian Gray is the titular main protagonist of the classic 1891 novel The Picture of Dorian Gray by Oscar Wilde, as well as its 2009 movie adaptation of the same name. He is one the most iconic and pioneering villains from classic literature and is identified as one of the first attempts at creating a protagonist villain. As such he has been adapted in various forms of media several times and has had several characters based around him.

Dorian Gray is a young heir who had his ego inflated by making friends with the corrupt and manipulative Lord Henry Wotton and the good-hearted Basil Hallward of whom painted his portrait for him. After having this portrait painted, Dorian's ego was vastly inflated and he became very narcissistic which prompted Dorian to wish to become immortal and make his painting age instead of himself.

Soon after this, Dorian meets Sybil Vane, a working class actress who would become his fiancée. After being told of her so called Prince Charming. Sybil's brother James is rather weary of Dorian despite not knowing who he is. Dorian and Sybil's relationship however doesn't last as Henry and Basil criticize Dorian believing him to only be in love with her for her looks. Dorian responds to their criticisms by dumping Sybil an act which winded up breaking her heart.

It is here that Dorian discovers the curse upon his painting, with him realizing that whenever he commits an evil action his portrait becomes more repulsive and disgusting.

Upon this discovery Dorian calls upon Basil the man who painted his portrait who is horrified to discover the curse and attempts to convince Dorian to get rid of the painting. Dorian however blames the curse on Basil and brutally murders him. Dorian then appears to lose control over himself and commits a great deal of crimes across the country.

After this Dorian goes into denial and tries to get over his guilt for these crimes when he winds up running into James Vane who informs Dorian of his attempts to find him and Sybil's suicide devastated by the news Dorian attempts to apologize but is only met with hostility from James who is later taken away after he attacked Dorian.

James begins stalking Dorian and winds up getting himself killed due to a misunderstanding with a hunter.

Dorian attempts to move on by locking his painting away and even finds a new love interest called Hetty Merton one of whose heart he will not break however the void left from Sybil's suicide is too much for him to handle prompting Dorian to have suicidal thoughts, his desire to remove all traces of his illegal activities also contributed to this.

Due to all of the above Dorian decided to kill himself by stabbing his portrait, during this he let out a loud cry of pain that the whole street could hear. Upon hearing this, several of his house servants rushed to the scene only to find an old, ugly and decrepit man on the floor of whom they recognized as their master due to his clothing. Dorian's painting was also restored to its original beauty as the curse was now removed from it.

In the famous graphic novel series Dorian has a very minor role with him being nowhere to be seen by the time the first comic takes place, however his portrait is seen hanging in the secret annex of the League's headquarters, indicating that he is still alive but not an active member of the League.

In the loose film adaptation Dorian has a much more significant role with him appearing as the secondary antagonist as opposed to Hawley Griffin and is significantly different in comparison to original book counterpart.

He appears as a very smug and egotistical man who cannot be seriously injured and doesn't age, due to a cursed portrait of himself that ages each year instead of him. However, to gaze upon the portrait would strip him of his immortal powers. Originally a member of the League as recruited by M (who is actually the terrorist known as Fantom) and the former lover of team member Mina Harker, Dorian is later revealed to be a double agent working for the Fantom in order to instigate the Fantom's plans for a world war.

To that end, Dorian secretly stole many of the League's powers, such as taking pictures of the inner workings of Captain Nemo's submarine The Nautilus, stealing a vial of the Hyde formula from Dr. Jekyll, cutting a skin from the invisible thief Rodney Skinner, and obtaining vampire blood from Mina by causing a drinking accident. It also turns out that Dorian was involved with the Fantom's intention of using Allan Quatermain to capture Hyde in order to obtain the Hyde formula. With the elements in his hand, Dorian escapes in an escape pod to the Fantom's fortress in the Asiatic Arctic, unaware that Rodney has stowed away in the pod and is secretly giving directions to the League.

When the League locate the villain's fortress in the Asiatic Arctic, Mina confronts Dorian and (after fighting him) finally defeats him by stabbing him in the chest; pinning him to the wall; however, she knows he cannot die due to his immortality so she grabs the painting and forces him to look at his magical portrait. Dorian screams in terror as the portrait reverts back to its original form and Dorian begins rapidly disintegrating, dying because the stab wound finally caught up to him after the painting reverted him to mortality, finally disintegrating into dust.

Dorian appears as one of the main characters in the TV Series Penny Dreadful : he shares some similarities to his various other counterparts in this series. However this appears to be the least developed version of the character, as he fails to stand out from other versions. This is one of the first interpretations after the LXG incarnation to present Dorian as having the supernatural ability of physical regeneration after bodily wounds.

Dorian Gray appears as a supporting character in season two of the Netflix Original Series The Chilling Adventures of Sabrina. He is not only an immortal in this adaptation but is also a warlock. He is a reclusive and mysterious nightclub owner who is good friends with Father Blackwood and Nicholas Scratch along with many other witches and warlocks. He runs a gentlemen's club for witches known as Dorian's Gray Room, although he views it as a gentlemen's only club, he will generally serve anybody and is very welcoming and helpful to many characters who need him.

This version of Dorian is not a villain and instead a heroic and wise man. This is also the first version of Dorian since the original novel to be blonde. He continues the adaptational power from previous versions of being able to regenerate his skin after being attacked. However, he can still draw blood and can take much longer to heal.

Dorian Gray is an extreme example of a narcissist, he appears to be legitimately in love with himself and his ego is only inflated as the novel progresses. Dorian then suffers from both gerontophobia and gerascophobia which prompts him to make the deal to maintain his young age and good looks.

However in the book Dorian does have a good side which he eventually develops again towards the end of the novel. Dorian is also rather sensitive when it comes to women as he felt responsible and deeply remorseful and regretful for Sybil's death which would eventually lead to his great depression, in order to fill the void left by Sybil Dorian finds a new fiancée of whom he is very loving and protective over.

By the end of the book Dorian is overcome with guilt and depression.

In LXG on the other hand Dorian is presented as a smug, uncaring and pretentious snob as well as a manipulative and arrogant recluse who only cares for his portrait being safe and having hedonistic activities such as love affairs with fellow immortals.

In Penny Dreadful Dorian has a very daredevil like attitude due to him having no reason to fear anything other than his portrait being harmed. He also leads a very hedonistic lifestyle and does many tasks to occupy his boredom however unlike his The League of Extraordinary Gentlemen counterpart these acts are usually much less atrocious and mainly boil down to researching the supernatural. He is however extremely hot-blooded and sexually active much like the majority of his other counterparts.

In the Chilling Adventures of Sabrina Dorian is presented at possibly his most heroic and caring although he looks at himself first above all others. 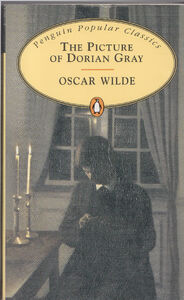 Dorian as depicted on an earlier cover of the novel. 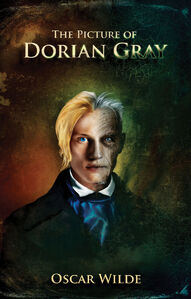 Dorian as depicted on a modern cover of the novel. 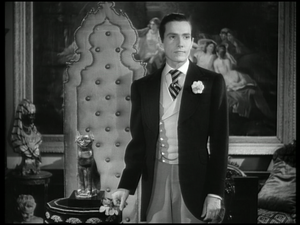 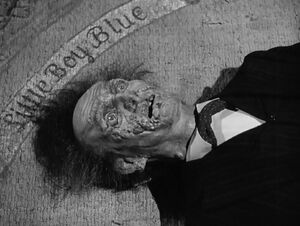 Dorian's death as depicted in the 1945 film. 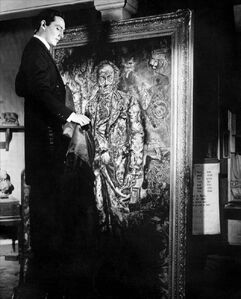 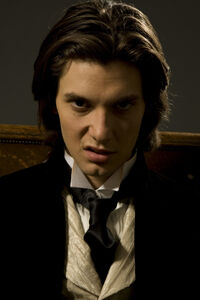 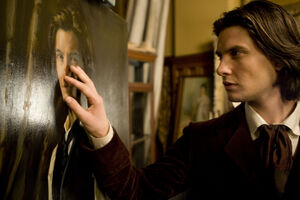 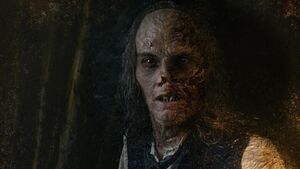 Dorian's portrait in the League of Extraordinary Gentlemen graphic novels. 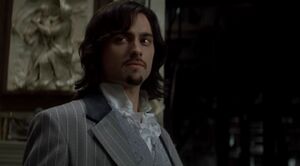 Dorian in The League of Extraordinary Gentlemen. 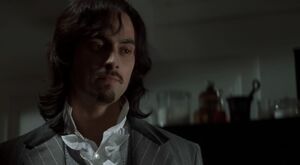 Dorian speaking to Mina Harker about the powers of his cursed portrait. 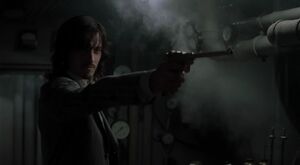 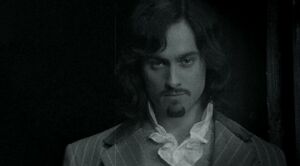 Dorian on an old film reel. 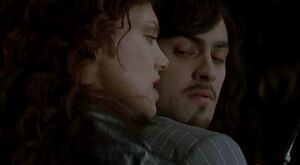 Dorian battling with Mina inside the Fantom's fortress. 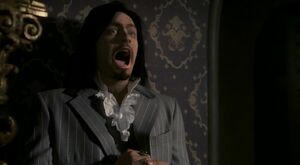 Dorian screams after being shown his cursed portrait. 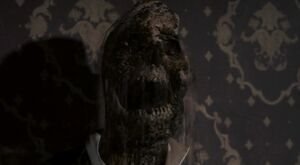 Dorian crumbles into dust as the portrait strips him of his immortality. 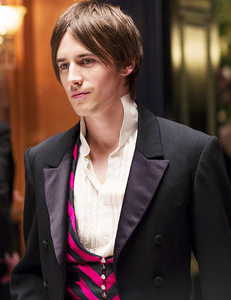 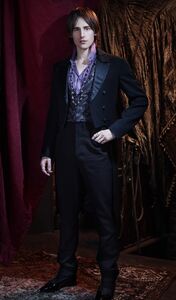 Dorian in Season 1 of Penny Dreadful. 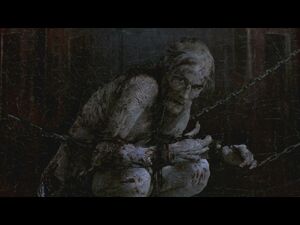