Doriate (in Japanese: ドリアーテ Doriāte) is a villain from the manga/anime, Fairy Tail. He was an artificially created Demon and a Mage of Succubus Eye.

He is voiced by Taku Yashiro in the Japanese version of the anime, and Xan Cramer in the English dubbed version.

In his humanoid form, Doriate is a tall, muscular and imposing individual. He has slanted dark eyes, each outlined by a dark profile, which are topped by a single, curved line that forms an angle some inches above his flat, angular nose. His dark eyebrows, on the other hand, are located further up, leaving him with little to no forehead, considering his dark hair's somewhat rounded widow's peak starts close to them; the hair is tied on the back of his head in a curly, round ponytail, and a curious light mark, highly reminiscent of a standby symbol, is located on the front.

Doriate's lower face was initially obscured by a light bandanna, tied behind his neck in a large knot, which sports a distinctive motif, seemingly meant to emulate an open, somewhat skeletal mouth, with two rows of small, squared teeth enclosing an elongated, darker area. This garment is meant to hide from sight several traits which remain devilish even in Doriate's human form: his mouth sports massive, pointed fang-like teeth, with particularly prominent lower canines jutting upwards and extending past the mouth's borders, and is surrounded by a jagged profile, with four tufts of fur growing closely to it, two on his cheeks and two at his large, squared chin's sides. His ears are also notable for possessing needle-like protrusions which jut downwards from their earlobes. When not in use, the bandanna is left tied around his neck, hanging on his chest.

Doriate's defined physical mass is evidenced by a close-fitting shirt adorned by a dark symbol in the shape of a "V", possessing short, rounded, pauldron-like sleeves whose edges are adorned by large, squared strips hanging from them. Dark armbands with light edges cover his elbow areas; his left hand, in addition, bears what looks like a light glove, reaching up to his elbow and sporting a dark flame motif. The Demon's somewhat baggy pants are dark in color but bear light sections on each leg's outer side, outlined by two rows of studs, and end below the knee in a series of large, light strips (not unlike those found on his sleeves, but with no space between one another), extending outwards to outline a conical shape as they near his dark sandals.

Not much is known about Doriate's personality. He seems to be apathetic when it comes to being up-to-date with recent events, especially when it comes to Fairy Tail, as he explains that he doesn't care for anything that happens on the surface. In the beginning, he appears as a calm and collected individual, but he is also brutal and cruel, when he says to Natsu Dragneel that he finds enemies easier to kill when they are in the form of children. His sadistic and soulless nature is further explored when he laughs at a de-aged Gray for being scared of him, while trying to strangle him. He has a quick temper and is someone who does not like being messed with, to the point that his Magic's effect wears off when he gets angry. At this point, he will stop at nothing to put an end to the person who taunts him, even if this means him revealing his true, demonic form.

Doriate and Minerva Orland talk in a mountainous region around the Sun Village, talking about how some treasure hunters and some Mages from Fairy Tail have arrived at the village. Minerva says not to worry about the treasure hunters, but that Fairy Tail will certainly be troublesome. Doriate later appears in the Sun Village, where he encounters Natsu Dragneel and, using his Law of Retrogression, turns him into a kid while claiming that this way, he'll be easier to get rid of. Doriate fights the weakened Natsu, but Natsu, after seeing his inability to win, distracts Doriate and then runs away. Doriate angers for being looked down upon and takes off his bandana, revealing the demonic lower part of his face. As he keeps walking around the Sun Village, Doriate encounters Gray Fullbuster, who asks him about his mouth, only to have Doriate respond by saying that he is going to eat him and then turns him into a child. Gray starts screaming as he remembers and relives sad moments from his life and Doriate says that seeing that brings tears of joy to his eyes. Doriate grabs Gray's head, lifts hims up with one hand and tells him that he is standing at the gates of the underworld. Gray, however, gets a grip and attacks Doriate's arm with his Ice-Make. Doriate lets him go, and they fight.

As Doriate reminds Gray of the fact that his abilities have drastically decreased due to de-aging, he accidentally falls for one of Gray's traps. As he wonders how his opponent was able to use good Magic, Gray answers that his strategy skills are just as good and his imagination got even better. Doriate repeatedly falls for Gray's tricks, and is also taunted for not being a very good opponent, which result in the effects of the Law of Retrogression wearing off. After this, a furious Doriate loses his composure and reveals his true form to Gray, which the latter identifies as a Demon from the Books of Zeref.

Now fully transformed, Doriate quickly strikes Gray, sending him flying, before releasing his Law of Retrogression as a screech, turning both his ally and foes into children. Doriate then stands as Gray attacks him, coming out of each scenario completely unfazed; Doriate jumps and kicks Gray. Moving at blinding speeds, the Demon motions to strike Gray, though his attempt is foiled by Happy and Carla, though his punch doesn't connect with the ice. Instinctively avoiding the ice, Doriate strikes Gray once more, though he is sequentially defeated by the Mage, who channels the ice's magical properties into Doriate, blasting him away. Now returned to his humanoid form, Doriate laughs and tells Gray that he and his guildmates are the ones who opened Hell's Gates and that such an action cannot be undone. Before he can finish, however, a demonic avian creature swoops down and maliciously takes Doriate into its mouth much to the Ice-Make Mage and the two Exceeds' shock.

Law of Retrogression: A form of Magic which allows Doriate to significantly lower the magical and physical skills of a target. Along with this dangerous reduction comes a supplementary effect which decreases the physical age of the victims, making it look like they turned into a younger version of themselves. Affected targets suffer from lack of proper movement because of the new size of their body, slower and notably weaker Magic usage, greater Magic consumption, weaker physical abilities and lower defense. Law of Retrogression comes as an extremely powerful (though underhanded) Magic, allowing Doriate to turn strong opponents into almost harmless, defenseless children, and thus making their elimination at his or his allies' hands a much easier task. It possesses a highly considerable range, affecting Erza Scarlet while the Demon wasn't even in sight, and can seemingly be performed without the use of any stance, gesture or incantation, as shown with Gray. When using Law of Retrogression on Natsu Dragneel, however, Doriate did assume a casting stance, extending his open arms sideways, the open palms facing the sky; in such instance, his body appeared to be enveloped in a flame-like aura. In order for the Magic's effects to be dispelled, Doriate must either be defeated or angered enough to enter his demonic form. Demon Form: As a Demon, Doriate is capable of assuming another, more beastly form. His body further bulks up, with his size becoming larger and his muscle mass gaining growing, which is most evident in his enlarged and elongated arms. His skin changes color, becoming darker, and his now loose hair grows longer to resemble a mane, with two light streaks extending some inches up from the sides of his forehead. His eyes become blank, his canines grow larger and his ears become pointed, their needle-like protrusions more prominent. Doriate's legs are now reminiscent of a bird's, complete with five large talons. In such state, the only piece of attire he retains are his pants, which are now comparatively smaller due to the increase in size. While in this state, he begins to walk on all four. What caused him to mutate during his battle with Gray was rage, which was enough to nullify the effects his Law of Retrogression had on foes, as well as to drive him berserk.

Hand-to-Hand Combat: Doriate seems to rely on unarmed combat as his main form of offense, employing his massive arms to pack powerful punches. His strikes are noted to be way more damaging on targets who suffered the effects of his Law of Retrogression, thus making the Demon's combination of Magic and unarmed skills a dangerous one. Doriate's blows gain a further boost in both power and speed when he enters his demonic form, which endows him with a body even more fit for melee battles. 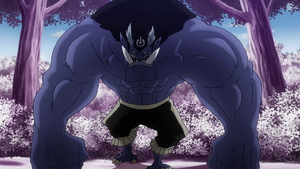 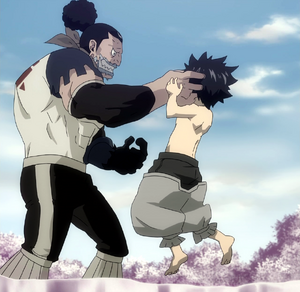 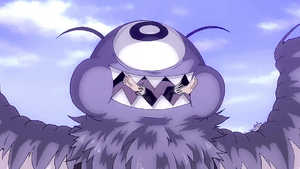 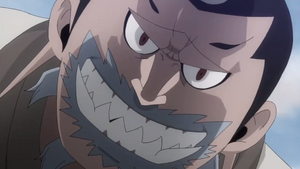 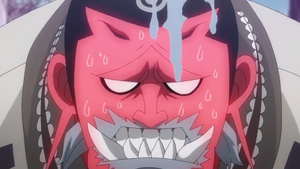 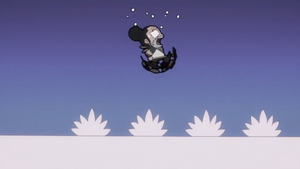