Leader of the Mindless Ones

Ruler of the Dark Dimension
Archenemy of Doctor Strange

Overtake the universe and mix it with Dark Dimension.
Torment and kill Doctor Strange.

Dormammu is a major antagonist in the Marvel animated universe, first appearing in Hulk and the Agents of S.M.A.S.H. the Season 1 episode "Stranger in a Strange Land". A malevolent god from the Dark Dimension, he is a self-obsessed dark lord of chaos bent on mixing the universe with Dark Dimension. He is the immortal founder of Mindless Ones and he serves as Doctor Strange's archenemy like in the comics and live action films.

He was voiced by Phil LaMarr, who also voiced Vamp in the Metal Gear Solid games, Mad Jack in Samurai Jack, Count Veger in Jak 3, The Beast in inFamous, Baxter Stockman in Teenage Mutant Ninja Turtles (2012), Goigoi in The Lion Guard, Aquaman in the Injustice games, and Rag Doll in The Flash.

The powers of Infinity Stones are affecting reality especially the mystic locations. After Dormammu emerged from the portal with the Mindless Ones, Doctor Strange and the Avengers contribute to battle until Black Widow uses the powers of Infinity Stones to defeat Dormammu by sending him back to hell. It is assumed that Dormammu plans to return and continue his mission to mix the dark dimension with the rest of the universe, and reign over the world.

Dormamu appears to be a demon which has the role of traveling dimensions. Any dimension which Dormamu enters, he would consume the life energy from it, in order to sustain himself. He made Baron Mordo his villainous side-assistant. Mordo ends up brainwashing humans to steal devices, so he could enter various new dimensions. Mary Jane Watson, Peter Parker and others also got recruited by Dormammu. Mary with other members end up breaking into Doctor Strange's Sanctum, so they could steal the Wand of Watboomb.

Luckily, Spiderman blocks them from the robbery. Peter Parker leaded the cult by him self. The recruited members again made the same attack on the Sanctum. Spiderman tried protecting the Wand, but he failed because they managed to put a spell on Spiderman to control him. Doctor Strange ended up reversing the spell from Spiderman, but realized that the Want got stolen by them. Mordo then takes the Wand and lets Dormammu enter the world.

Spiderman ends up entering Dormammu's world, to get the Wand Back for Doctor Strange. Dorammu instantly tries to stop the wallcrawler, but fails. Before the portal closed, Dorammu takes mary Jane and tries to explain to her that he is her father, but Dr. Strange already has shown a image of her father, so she didn't trust him, and escaped.

Once Dormammu's plan failed, he became extremely upset. But the finds out that the Venom Symbiote reproduced. He instantly orders Mordo to change John Probe's course, on which the symbiote is attached to, so it crashes the Earth, making a chaos. The probe ends up crashing on Earth, while the symbiotes attach to a young couple. Mordo then orders the symbiotes to steal the portal device for Stark Enterprises.

The symbiotes were successful at their job, But Dormammu needed more life energy when he leaves. He ends up giving Carnage the ability to absorb the energy and sends him on the mission. While doing so, he ended up making a energy bond with Carnage. In the end, Carnage gains the energy and releases it into the portal in order for Dormammu to leave. Dormammu then enters Earth.

Iron Man, Spiderman and Heroic-Venom end up together battling against Dormammu. Iron Man and Venom fight Dormammu, as Sipderman goes to the device and reverses the polarity effect. The portal then instantly pulls Dormammu back into his dimension, plus the portal releases the energy which Carnage absorbed. Spiderman then increases the power, which makes Dormammu instantly back in his own dimension. But the link with Carnage was still active, until Venom pushed Carnage into the portal which Dormammu was trapped in. 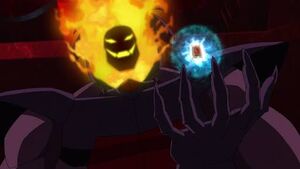