NOTE: This article is about the incarnation of Dormammu from the Marvel Cinematic film series. The mainstream version can be found here: Dormammu.

Ruler of the Dark Dimension
Master of the Zealots

Destroying worlds through the Multiverse.

Conquer all existence and to merge the universe with the Dark Dimension itself with himself as the supreme ruler (failed).

Dormammu is the overarching antagonist of the 2016 Marvel film Doctor Strange. He is a gigantic, godlike force of evil who exists in the Dark Dimension and seeks to spread his malign influence to all other worlds.

He is voiced by Benedict Cumberbatch in motion capture, who also played Doctor Strange in the same film, Smaug and Sauron in the Hobbit film trilogy, Khan Noonien Singh in Star Trek: Into Darkness, William Ford in 12 Years a Slave, Shere Khan in Mowgli: Legend of the Jungle and The Grinch in the 2018 film of the same name.

However, Dr. Stephen Strange (a new member of the Masters of the Mystic Arts) reversed the time by the use of the Eye of Agamotto and the Infinity Stone inside it to undo the sanctum's destruction, and then flew into his dimension to negotiate with him. Dormammu immediately refused and quickly killed Strange by blasting him with energy, but to his confusion, Strange reappeared on the Dark Dimension surface, repeating himself confidently.

Perplexed, Dormammu killed Strange again, only to have him reappear again, repeating his intention. Stunned, Dormammu angrily demanded to know what was happening; the Doctor then revealed that he had used the Eye of Agamotto (containing the Time Stone) to create an infinite time loop, with them spending eternity together in a endless cycle, the only trap Dormammu could not escape from since the Dark Dimension was a place beyond time itself and therefore Dormammu had no power over it.

Eventually, after killing Doctor Strange multiple times to no avail, Dormammu demands to be freed from the time loop and reluctantly gives in to bargain with Strange. At this point, Strange offers a deal: Dormammu must banish himself and the Zealots from the Earth forever and never return, and Strange will break the loop to return the favor. Having no other choice, Dormammu accepted the deal, turning the Zealots and Kaecilius into Mindless Ones and dragging them into the Dark Dimension forever, and kept his own word for now, sealing the portal between the dimensions. While not confirmed, it can be implied that Dormammu honored his promise to Strange and never returned to the Earth, remaining in his own realm for all eternity.

Dormammu appears to be a being of pure and utter malevolence, seemingly focused only on expanding his Dark Dimension realm and conquering all other worlds and dimensions of the Multiverse, in order to fuse them in as well. He takes utter delight in causing pain to others, evident of when he tried to kill Strange multiple times until he realized that he's stuck in a time loop.

Despite his ruthlessness, Dormammu is willing to honor those who make deals with him, as he reluctantly kept his end of the bargain with Strange by ending his assault on Earth and remaining in the Dark Dimension in order for Strange to break the time loop. However, he only did this not because he felt it was the right thing to do, but because he was forced to do so, therefore being dishonorable. 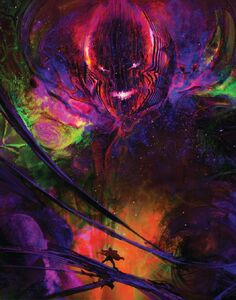 Dormammu within his domain. 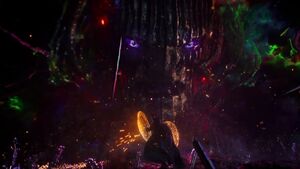 Dormammu and Doctor Strange face off. 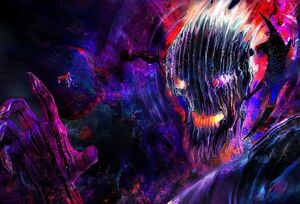 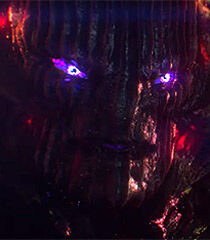 Close-up of Dormammu's face.
Add a photo to this gallery 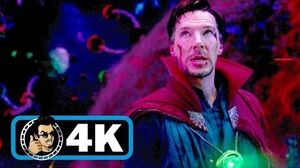 Retrieved from "https://villains.fandom.com/wiki/Dormammu_(Marvel_Cinematic_Universe)?oldid=4307498"
Community content is available under CC-BY-SA unless otherwise noted.