Note: This page is only about the incarnation within Spider-Man: The Animated series. For his mainstream version, see here.

Demonic Consumer of other dimensions

Draining energy from other dimensions.

Devour as many souls as possible (partially succeeded).

Dormammu is a recurring antagonist in Spider-Man: The Animated Series. He is a demonic Dark Lord who had sought arrival to Earth in order to consume it's life force.

He was voiced by the late Ed Gilbert.

Dormammu is depicted in the show as a Galactus-like figure who travels from Dimension to Dimension, devouring their mystical energy to sustain his life-force. He needed the help of Baron Mordo to break into our universe and drain it of life. Under his command, Mordo formed a cult known as the Center for Reunification-an order in which he would put innocent people under the illusion that they were reunited with their lost loved ones. In reality, he was brainwashing them into doing his bidding when they thought they were with said loved ones. One of his victims is Peter Parker's love interest, Mary Jane Watson. Mordo uses his cult to pursue the Wand of Watoomb to allow Dormammu into this dimension but is opposed by Doctor Strange and Spider-Man. Dormammu was shown to be bad-tempered and an extremely impatient and abusive master, using his power to throw Mordo against walls for failing him, ranting that he is doomed when Mordo first fails to capture the Wand, and even calling his disciple a weak fool when he is bested by Strange upon succeeding in his task.

He grabs the Wand of Watoomb whilst Spider-Man and Strange are distracted and drags it through the portal that Mordo has opened into his dimension. Spider-Man and Strange pursue the Wand and manage to get it off Dormammu, before crossing back through the Portal. Dormammu then dragged the brainwashed Mary-Jane Watson through the Portal into his Dimension in an attempt to possess her and use her as a vessel to cross through into this universe, even trying to trick her by taking the form of her father, but Mary-Jane was strong enough to resist him and walked back through the portal on her own, before Strange closed it with the Wand of Watoomb.

Not to be outdone, Dormammu had Mordo start a technology company which would supply Stark Industries with a device called the Inter-Dimensional Probe. This technology could bring Dormammu to Earth. Under his orders, Mordo broke into Stark Industries, and used a computer to bring the John Jameson Probe back to Earth. His reason for doing was because the probe had the Venom symbiote attached to it, back when Spiderman trapped it there before it went into space. Dormammu’s plan was to bring the symbiote back to Eddie Brock so he could bond with it, and retrieve the Inter-Dimensional Probe from Stark Industries. Once it landed, Dormammu had Mordo hypnotize a young couple into bonding with the symbiotes. Mordo uses the woman to bond with the Venom symbiote and break Eddie out of the Ravencroft Institute for the Criminally Insane. The plan in bonding Eddie with the symbiote is a success and under Dormammu’s orders, Venom attacked Stark Industries to get the probe.

Venom and Carnage attempt to kill each other one last time, but are interrupted by Dormammu, who tells them that he needs an equal amount of life force to replace himself once he leaves his dimension. Venom leaves and Carnage tries to drag Venom back, but is stopped by Dormammu who tells him he longer needs Venom now that he has him. Dormammu then gives Carnage the ability to absorb souls from several citizens of New York City, including Venom’s love interest, Dr. Ashley Kafka.

Mordo and Carnage take Ashley's body, and Carnage drains the souls into the urn he would use to throw into Dormammu's dimension. However, they are interrupted by Spiderman, Venom, and Iron Man and engage in a fight. Mordo has Carnage throw the urn into the portal to Dormammu's dimension. Dormammu is temporarily freed and engages in the battle as well. Fortunately, Spiderman is able to send Dormammu back into his portal. As he is being drained, all souls return to their bodies. Spiderman also must send Carnage in order to close the portal completely due to his connection to Dormammu. He does so, but not before Carnage tries to drag Ashley with him. Venom frees her and allows Carnage to take him instead. Dormammu remained imprisoned in his dimension for all eternity. 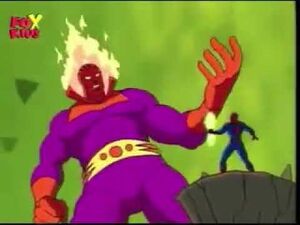