Absorbing energy from others

Spread chaos throughout the Empire (succeeded for a while).

Dorothea is a major antagonist from the manga and anime Akame ga Kill!. She is one of the members of the Empire's Secret Police Force, called Wild Hunt. According to Syura, she is an alchemist with many body modifications. Dorothea appears to be a beautiful young girl, but in truth, she is actually an elderly woman who maintains her youthful appearance and expands her lifespan by absorbing the blood and energy of others.

Dorothea has the appearance of a young girl of small height with blonde hair, but this is only a façade to hide her true age; in reality, she is actually very old, and has thus extended her life span by stealing energy from other people. She wears a turquoise dress with a white apron and a ribbon on her head, giving her an innocent appearance. Prior to her introduction, Dorothea wore a hooded jacket, like all the other members of Wild Hunt.

Although Dorothea came off as the quietest member of Wild Hunt, she apparently had a short fuse, as she got well and truly furious once she noticed one of the death row prisoners had survived Cosmina's attack but was afraid of her. She claimed that her victims should feel lucky, believing that her method of killing is much better than either Cosmina's or Izou's.

While she never took part in the mass rape, she nevertheless killed people solely of boredom. However, after drinking Tatsumi's blood, Dorothea's sexual desire awakened, leading her to attempt to molest him.

She also seemed to have been rather fond of Dr. Stylish to the point of being his fan, as she joined Wild Hunt in order to meet him, even though she was unaware that Dr. Stylish had already died by the time of Wild Hunt's debut. Dorothea was quite shocked after seeing Honest's lack of empathy after hearing from her words that his own son was killed while trying to do something to prove himself worthy in the eyes of his father and please him.

Dorothea was first seen during the show put up by Syura for his father, Prime Minister Honest. She bit a few death row prisoners, leaving behind their mummified corpses. She also participated in Wild Hunt's other affairs in a similar manner.

After the deaths of Champ and Enshin, Dorothea recovered an injured Cosmina and stored her in a cryogenic tube on life support; she was surprised by Cosmina surviving a near death experience. While claiming that Cosmina had permanent brain damage, Dorothea decided that she would be a great subject for her research and intended to revive her in some capacity. Dorothea also acknowledged Syura's ability to move on quickly after the deaths of his comrades, even though she believed Syura got along well with Enshin, whom Syura said he didn't need anymore now that he had been defeated despite the advantages wielded with the full moon.

After Syura managed to trap Tatsumi and Lubbock in the palace, Dorothea attacked Tatsumi, biting him with her fangs. Dorothea was immediately allured by his rich blood. When Tatsumi was imprisoned, she tried to rape him along with Suzuka, but both were stopped by Esdeath. Later, Dorothea was present when Honest disbanded Wild Hunt and later reported Syura's death to the Prime Minister. She was surprised of how Honest didn't even have the sympathy for his own kin.

Eventually, using the research Stylish left behind, Dorothea used that along with her alchemy to help tune up the Teigu for the Empire and turned Cosmina into a monstrous creature with insect-like features for her personal leisure. Later, along with Cosmina and Izou, she attacked several Revolutionary Army outposts, massacring everyone there until they were confronted by Akame, Leone and Tatsumi.

Dorothea engaged Leone in a fight while Akame was fighting against Izou and Tatsumi was paired with Cosmina. After noting that Izou was killed by Akame, Dorothea sent her insect-like humanoid Danger Beasts to fight her. One of those pawns had a sticky goo inside his body that trapped Murasame inside it, and Akame found herself forced to fight without her sword, which was what Dorothea planned to defeat her, in belief that the former imperial assassin would be helpless without her Teigu. This proved wrong, of course, since Akame easily defeated all of them with her bare hands, much to Dorothea's displeasure.

In a first moment, Dorothea easily overwhelmed Leone, due to her enhanced physical strength provided by her body modifications in conjunction with her alchemy. In a second clash, Leone was faster than Dorothea and kept pushing her back until she finally landed a clean, effective hit on her. Dorothea decided to take that fight seriously and used a gas that at first Leone believed was a kind of poison, but that in fact was a gas that could momentarily turn her into stone. Dorothea took the chance to use her Teigu to drain Leone's blood, after which she started to feel power swelling up within her. She then went to check on Cosmina only to find her in disadvantage against Tatsumi, much to her horrified shock.

She concluded that Cosmina would have had enough nutrients to overcome and defeat Tatsumi if they had at least two more days without being discovered. After seeing Tatsumi unaffected by Cosmina's poison, she figured out that he developed resistance against it, due to the Prime Minister's failed attempt to kill him; she then decided to provide backup but was unexpectedly interrupted by a surprise attack by Leone, who recovered after playing dead and replenished her blood by eating animals nearby; Dorothea endured the hit due to the energy gained after draining Leone's blood. This was where Dorothea's hidden secret was revealed; for a moment, her face became that of an old woman and Leone realized that her young appearance was a façade that would fade once she received damage. Dorothea quickly became agitated to the point of calling Leone a barbaric animal.

As a last resort, an angry Dorothea summoned a monster to kill Leone. However, Leone narrowly avoided being killed and broke Dorothea's neck. Dorothea fell flat on the ground, on her back, muttering in disbelief how that could have happened to her, and soon witnessed the death of Cosmina at Tatsumi's hands. She revealed in her mind that she could easily heal from such damage and would return the next day for her revenge, so she decided stay still and play dead, until Leone and the others leave.

However, Leone wanted to make sure that her target was dead and intended to smash her with a large rock. Dorothea realized this, ended her acting and started begging for her life, saying that it would be a great loss for humanity, as she had been researching a way to make a person become immortal and that this could be achieved by stealing energy from other people to extended one's own life. Leone realized that this was why Dorothea looked so young, but didn't care and began to move in for the kill.

Dorothea begged again with tears in her eyes that she didn't want to die and wanted to keep attaining knowledge and stay beautiful forever. Leone countered her by saying that all of those who were killed by her didn't want to die either. Despite begging and offering the prolongation of the human lifespan, Dorothea was brutally crushed under the huge boulder. With Dorothea's death, Wild Hunt was completely annihilated for good, giving the Revolutionary Army another huge advantage against the empire in their quest to slay Honest with their hands.

Dorothea's Teigu was called "Blood Collection: Absordex". It took the shape of teeth or fangs which she used to bite enemies in order to drain their blood and consequently kill them. The victims' bodies become shriveled up, being mummified in the process. The main usage of this was for Dorothea to replenish her strength and prolong her lifespan and maintain her youthful appearance with the help of her experiments.

Syura noted she also is an alchemist as well as having many body modifications and that she has a world-class talent just like the other Wild Hunt members. She is actually very old, but due to being combined with her alchemy and Teigu, she looks very young. However, when she starts to lose her powers, her façade disappears, as shown when she starts to sport wrinkles after having taken damage from Leone. Despite her small build, she possesses enhanced physical strength which she gained through bodily modifications, able to toss a grown man high in the air and even single-handedly suppress Leone. According to Syura, her alchemy and Stylish's science could have been combined had that man lived long enough for her to be able to meet up with him. She improved the Stylish's Humanoid Danger Beasts and reproduced them even after his death. She also mutated Cosmina after her brain was damaged to a colossal Danger Beast Hybrid.

During her fight against Leone, it was shown she carried unique items as a product of her alchemy, within her body. She used a tube of a gas that could petrify an enemy for a short duration. She also used a wand-like item to summon a monster: after drawing a symbol from her blood, she places that item on it to release massive amounts of black miasma, which shaped like a beast with many eyes and mouths. This creature had acidic properties which it could use to slowly corrode skin and clothes. 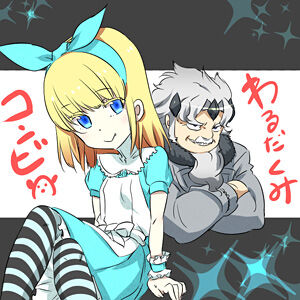 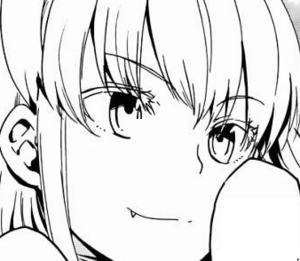 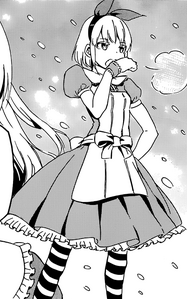 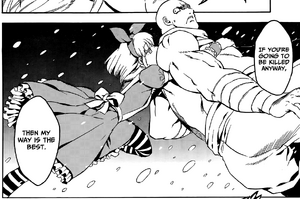 Biting one of her victims with Absordex. 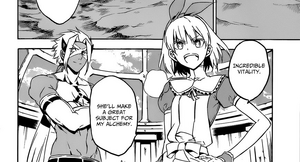 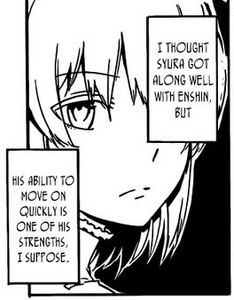 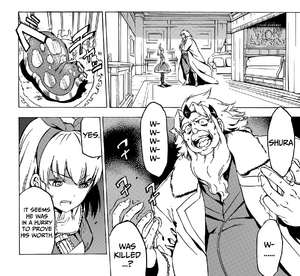 Reporting to Honest about Syura's death 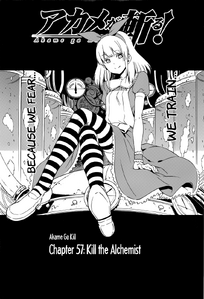 Dorothea on the title page for Chapter 57. 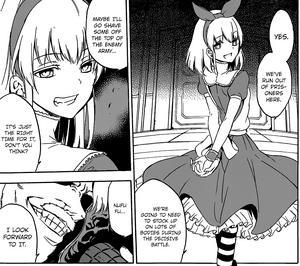 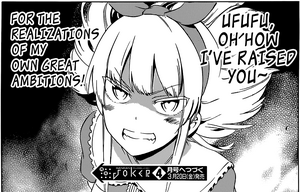 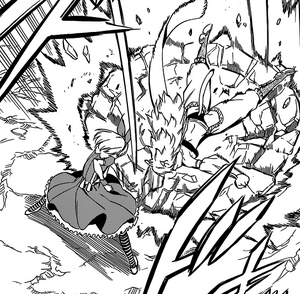 Dorothea slams Leone to the ground 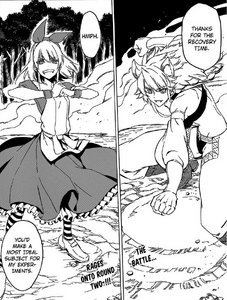 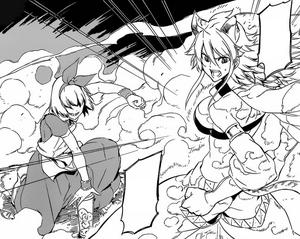 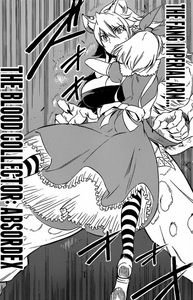 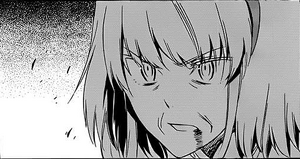 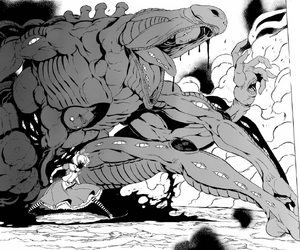 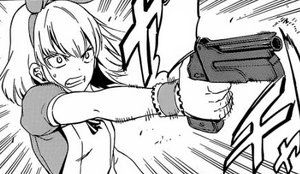 Attempting to gun down Leone 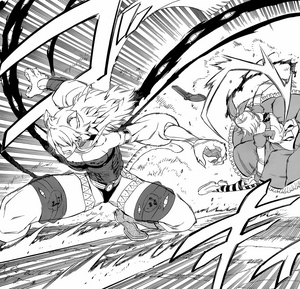 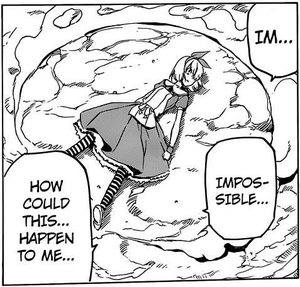 Lying flat on the ground after her neck was snapped by Leone. 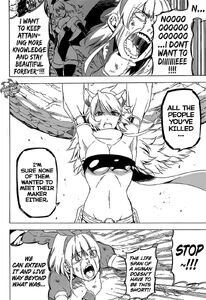 Dorothea pleads for mercy from Leone. 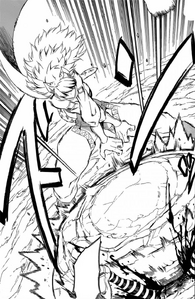 The death of Dorothea.
Add a photo to this gallery

Retrieved from "https://villains.fandom.com/wiki/Dorothea?oldid=3884309"
Community content is available under CC-BY-SA unless otherwise noted.