Succeed in his task for Gold (both failed).
Have the three Eddies killed for stealing his money.
Have a shareholder killed.
Have Lord John and his men killed (all succeeded).

Dorothy Macha, known as Mr. D, is the main antagonist of the 2005 live action film Revolver.

He was portrayed by the late Ray Liotta, who also portrayed Ray Sinclair in Something Wild, Henry Hill in Goodfellas, Pete Davis in Unlawful Entry, Ryan Weaver in Turbulence, Paul Krendler in Hannibal, Tommy Vercetti in Grand Theft Auto: Vice City, Billy Handsome in Call of Duty: Black Ops II, Samuel Rhodes in Identity, Gallian in In the Name of the King: A Dungeon Siege Tale, Jack Blade in Wild Hogs, and Roy DeMeo in The Iceman.

Macha controlled an illegal gambling empire all over the city. He kept in control of it through his three underbosses, the three "Eddies". When he lost his card game just before an important match, he wanted to recruit Jake Green to take his place. When Green refuses, Macha's men harassed the family of Jake's brother and it eventually came to a heated and acrimonious argument in which the wife of Jake's brother was accidentally killed. Jake did not give Macha up to the police to protect his family and was sentenced to prison for the murder.

After seven years in prison, Jake Green immediately heads to the casino of Macha. Once Macha is notified, he has Green brought up to his private table. In a respectful and polite conversation, Macha reveals that he knows that Green plans to build his own criminal empire, similar to Macha's. He states that Green is no leader but an employee but Green does not respond to the provocation but instead challenges Macha to gamble. Using the man's ego, Green manipulates Macha into betting a lot of money. Green wins the game and leaves Macha's casino. On his way out, he is attacked by Macha's men who want to get the money back from him. In his casino, Macha sends his right-hand man French Paul to eliminate Green, afraid that Green might cause more problems. However, Green is saved by two mysterious men before Macha's hitman Sorter can kill him.

Macha eventually sets out to meet the influential "Gold", but after an hour of waiting Paul returns to him and informs him that no one sees Gold and that they are to deal with Lily Walker, one of Gold's representatives. Once Walker has arrived, she refuses to shake his hand. She then informs him about the gravity of the job Macha has to do for Gold. She claims that she heard that Macha might have some problems, which Macha denies. She states that Mr. Gold does not like publicity and Macha promises that he will not let her and Gold down. Before Macha leaves, Walker reminds him that Gold does not give second chances.

Macha is informed that his casino has been robbed, the entire safe has been ripped out and the wall with it. Macha is surprised and wonders why exactly the thieves took the safe, claiming that he hasn't been using it for ages. However, Paul then reveals to him that Mr. Gold's "powder" were stored in that safe. The horrified Macha now makes it his highest priority to get back the drugs and also sends Paul to buy new drugs in the meanwhile to keep up appearances. In addition, Macha is also caught in a possible crime war with rival crime boss Lord John, of whom he is forced to buy the new cocaine off. The drug deal between Macha's and John's men is disrupted by the crew who also stole Gold's drugs from Macha's casino. Green is one of them. After eliminating both parties with knockout-gas, Green's crew steals both the drugs and the money.

Macha is eventually informed by Paul that Green is involved in the heists. He sends a crew to kill him but the crew returns without success. While he is informed about their failure, someone attacks the restaurant that Macha is currently in. Not Macha is killed, however, but an assassin disguised as waiter who was sent by John. The dying assassin still attempts to shoot Macha, who is thrown to the ground by his men trying to protect him. Although she manages to shoot his finger off, Macha is able to kill her by firing his gun at her multiiple times.

After the unsuccessful attempt on his life, Macha sends his men to find a group of Lord John's men and interrogate them for the location of his cocaine. While he is waiting for results, he is suddenly informed that he apparently donated millions to charity. The story is already all over the newspapers and Macha decides to take the credit for the donations. Paul then reveals to him that the interrogations revealed that it was not Lord John who stole his cocaine but Jake Green. Macha rages and sends Paul, Sorter and a dangerous army of henchmen to kill Green and retrieve the powder.

While his men are gone, Macha starts having paranoid conversations with himself and realizes that Gold will kill him if he keeps failing. The same moment, Macha is informed that Walker has arrived to meet with him. She sarcastically congratulates him on his noble donations but also asks why, if he had time to do donations, he has not yet concluded their business. He states that everything is under control and that he only needs more time but Walker sees right through him and states that nothing is under control. She coldly claims that Gold does not give anymore time and turns to leave, mentioning that Macha will be hearing from Gold. Furious, Macha screams after Walker and asks her who she thinks she is. He screams that if Gold wants to tell him something, he has to come to him. Walker is unimpressed and keeps walking off. The voices in Macha's head then furiously advise him to kill everyone before realizing that their outburst was a mistake. The insane Macha realizes that he should beg for forgiveness. He runs after Walker, claiming that he did not mean what he just said, but Walker is already gone.

Paul, Sorter and a large group of goons interrogate Green's brother for the whereabouts of Green but when Paul threatens to kill the man's daughter, Sorter betrays him and Macha and kills all of Macha's men.

While Macha is sleeping, he is visited by Jake Green, whose second persona is Sam Gold, and has come to kill him. He wakes up Macha and, while Green and Gold are fighting inside Jake's head for control, Jake apologizes to Macha for cheating him out of his money and insulting him. After apologizing for underestimating Macha, Jake leaves the room and leaves a horrified Macha behind. Once Green is gone, Macha jumps out of his bed and gets a gun from a nearby drawer. He awaits Green, who has used the elevator, and aims his gun at him. He viciously mocks Green for having come to his house with a loaded gun. Macha orders Green to tell him what his game is and threatens to shoot him. However, Jake seems to be unafraid and simply walks past Macha who trembles and cries once he realizes that Jake does not fear him. Jake leaves the building unharmed.

Dorothy is an egomaniacal, greedy, narcissistic control freak. He uses fear, pride and dominance to control other people to gratify his own ego, this is mostly shown by the overtly close interactions he has with Paul and Sorter throughout the film. His mind was already messed up because he was always dependent on his ego and his ego was dependent on controlling others. At times he shows himself overtly sexually dominant because we can further conclude it is based on his indoor tanning room and his obsession with image. Cowardice and insecurity are also among his traits, hence him crying and begging to be powerful at the end and wanting Jake to fear him when in fact he has the right opportunity to kill him. 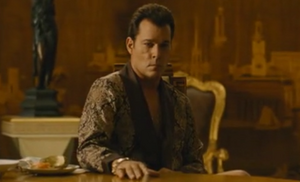 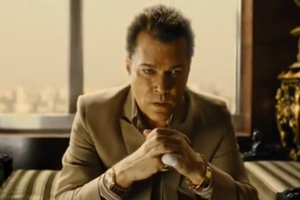 Macha realizing he is doomed. 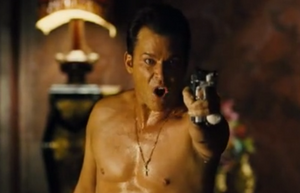 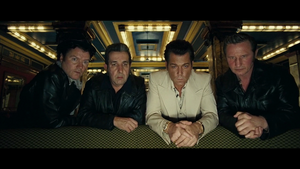 Macha and the three Eddies. 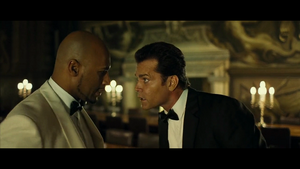 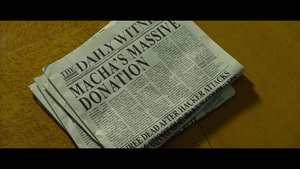 Macha getting recognition from the press after donating millions to charity. 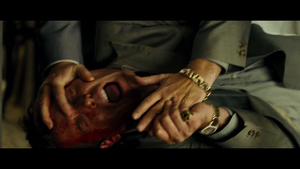 Macha screaming in pain after losing a finger. 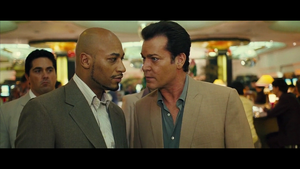 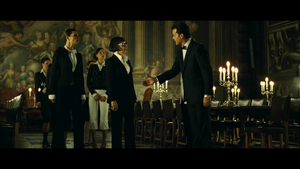 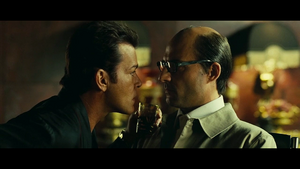 Macha asking Sorter for a favor. 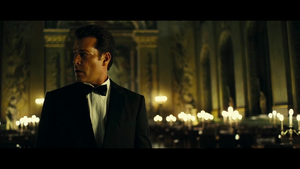 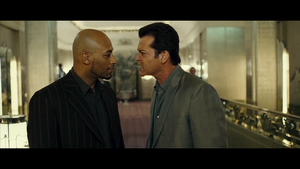 Macha, angry because of Paul's incompetence. 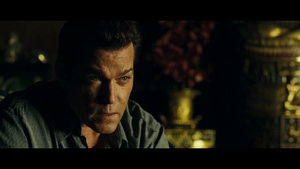 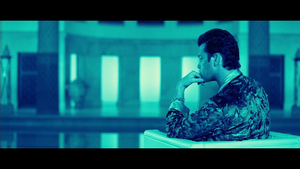 Macha thinking to himself. 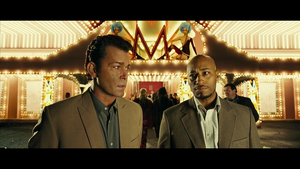 Macha asking Paul about a shareholder. 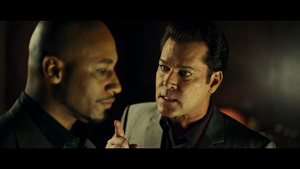 Macha takes out his anger on Paul. 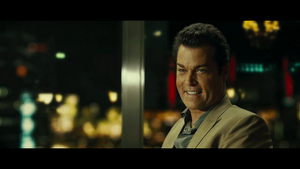 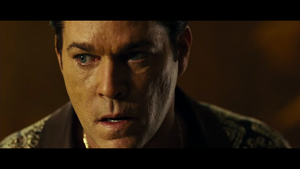 Macha losing control over himself. 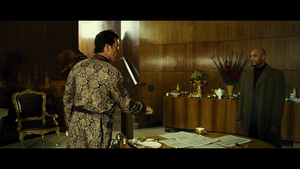 Macha ordering Paul to capture Green and retrieve the powder.