Doryun Sanbu is a mole-themed Gangler Monster and is the main antagonist in episode 35 of 2018 TV series called Kaitou Sentai Lupinranger VS Keisatsu Sentai Patranger. Also he is equipped with an Inro-like treasure called Le grand fossé.

He was voiced by Daisuke Kishio who previously voiced Serial Thief Dorba from Timeranger and Kenloid from Go-Busters.

Doryun Sanbu's head is a white skull head with evil yellow eyes, an orange mole nose and a purple construction hat, his jacket is a purple star nosed mole face with a Gangler safe on its nose, he also has white mole claws on his shoulders, he has 2 grey bucket drilling claws on each hand, his belt has a purple hammer, his knees are scare purple mole heads and his feet are mole feet, his overall appearance is a purple construction worker.

Doryun Sanbu made his first appearance when he arrived to the city via the sewers as he pops his head from with a manhole cover on his head right where Kairi was meeting with Kogure as Doryun used the treasure's ability to split the personality of his victims one good and one mean. However this brought the attention of the police and Kairi as he transformed into Lupin Red to battle him however when Doryun is about to use the treasure's ability the police managed to knock Doryun from his original target, but he hits Kogure instead causing him to have his good and bad personality to split. So when the police are about to open fire on Doryun they instead get pelted by negative personality of Doryun's victims as with that said during the riot Doryun made a hasty retreat back underground.

Speaking of which he appeared underground with a couple of Pordermen as he trying to decide where to pop up next in this town, but he hears something that's right behind him. So he turns around open fired as a disguised Kogure pop out of his hiding spot and Doryun was about to use the treasure's ability to split his personality again, but here's a downside to this treasure's ability it can only be used once per victim and can't be used again on the same victim that's been already split. After that he was then ambushed by the arrival of the thieves and Noel, so he has the Pordermen to deal with the thieves while he battles with Noel. Once the Pordermen has been dealt with Lupin Blue has gained access to Doryun's safe (which his password is 7-0-6) as Lupin Yellow got Le grand fossé (which translate as "The great divide") Inro after that he was then taken out by Lupin Red.

However thanks to Goche Ru Medou he was then enlarged however instead of battling them he decides to run away. So they have Lupin Magnum chased that cowardly Gangler. Once it arrived at its destination Doryun sent the Pordermen to deal this bot for breaking an entry. However they were getting wrecked by it so he helped them to take on Lupin Magnum. After that it sent Doryun Sanbu out from the underground tunnels right in front of the police who were on they're way to the next location. After that (now being used as a weapon by Lupin Kaiser) Doryun was then destroyed by this finisher called GoodStriker: Blow 'Em Away Magnum. 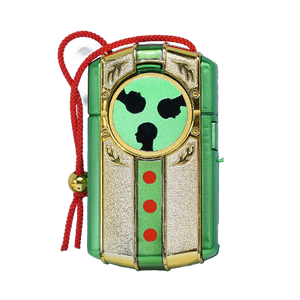 Retrieved from "https://villains.fandom.com/wiki/Doryun_Sanbu?oldid=3578675"
Community content is available under CC-BY-SA unless otherwise noted.