Dosu Kinuta (in Japanese: ドス・キヌタ, Dosu Kinuta) is a minor antagonist in Naruto. He is a skilled ninja from the Hidden Sound Village.

He was voiced by Daisuke Egawa in the Japanese version of the anime, and by John DeMita in the English dubbed version.

He, along with Zaku Abumi and Kin Tsuchi were allegedly ordered by Orochimaru to kill Sasuke Uchiha during the Chūnin Exams, but he soon realized that he was just being used to test Sasuke's abilities.

Soon after, Dosu decides that the best way to ruin Orochimaru's plan is to face Sasuke in the Exams and kill him; to ensure Sasuke makes it to the finals, he tries to assassinate his upcoming opponent, Gaara, in the night. However, Dosu is ultimately unsuccessful; Gaara transforms into Shukaku and kills him. 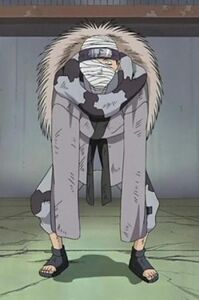