Ruler of his unnamed kingdom

Stealing crowns from other monarchs.

Kill all kings and queens he can find so he can steal their crowns.

The Double King is the titular protagonist of the 2017 YouTube video of the same name created by Australian animator Felix Colgrave.

He is a monarch who abandoned his kingdom and subjects to seek for crowns of other kings and queens to steal, even though it means murdering them in the process.

The Double King is a fat hunchbacked creature with two giant hands and feet, two eyeballs and wears a grey-blue shirt with buttons and a maroon cape with a blue hem.

While the Double King never spoke a word, it is shown that he is a power-hungry tyrant on the hunt for any crown he sees, willing to kill for his goal. He is also shown to be mentally unstable, as evidence in the scene where he mutilates his own finger when noticing it had a crown (the small crown of the deceased Lord of the Flies). The origins of his goal are largely due to the fact that his species are cave dwellers which he utterly despises and thus wants to distance himself from his origins as far as possible.

The story starts off with the Double King himself traveling to the castle of the rats for his first victim, the rat's monarch Ratking Augustus the Agreeable. The Double King kills Augustus by ripping his skull out before walking away with his crown. When Augustus' subjects come to the Double King's castle to question him, he places a mousetrap in front of them.

Queen Daisy VII's crown falls onto a cloud that became King Stratomonarchus, who then brought rain to the ground onto a squash that transforms into Lady Gertrud of Squash, the latter in which the Double King smashes on the ground and departs with her crown.

The Double King then attempts to chase after King Aldo of the Glade when he morphs into a butterfly to find the location of the latter's crown, but Aldo has already abdicated the crown and only has keys on him. The Double King then turns around to see the Mountain King Olov. Using a giant castle-like war machine, the Double King gets launched and scurrying up into Olov's crown and then shoots at his war castle to make it back off.

As it turns out, he found a thriving jungle inside the mountain coronet and snatched up Durt the Mushroom Elder's without killing him, but realizes that his crown does not fit with the others the Double King has stolen. The Double King eventually noticed a cockatoo with feathers that made the shape of a coronet. Believing the bird has a crown, he then started to pursue on the cockatoo, getting lost before sitting down in dismay.

Looking at his hand with the coronet belonging to the deceased Lord of the Flies, the Double King dementedly imagines it as a new monarch to usurp, and cuts the crowned finger off with a knife before hallucinating and eventually dying from blood loss. The Double King's corpse was then taken to the realm of the dead where he meets the kings and queens he killed and the matriarch of the realm, Agatha, in a dining room. He took the sight of her large crown and tries to steal it, but fails over and over due to Agatha using her telekinesis to send him back to his dining seat. The Double King then decides to make a crown out of a napkin, only to see the skeletal queen take it and place it on hers.

Enraged, the Double King goes on a tantrum, screaming and pounding his fists on the table in fury as his self-made crown was taken from him. With a bit of short convincing from Ratking Augustus and a sigh, Agatha gives up her crown to the whining ruler. Delirious with joy, the Double King runs off with the large crown and escapes the realm of the dead to float away into deep space, and what remains of his fate remains obscured. 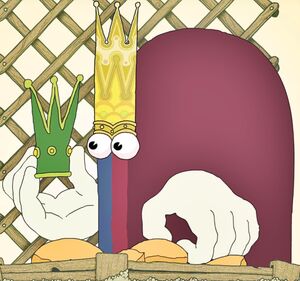 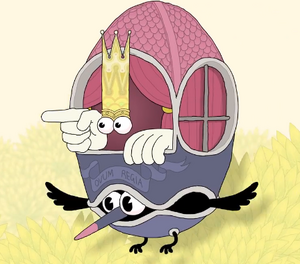 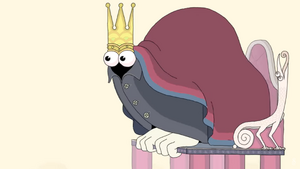 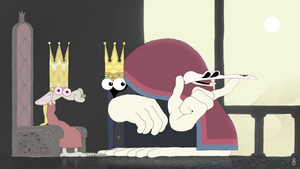 The Double King holding the skull of Ratking Augustus the Agreeable after pulling it out of his head. 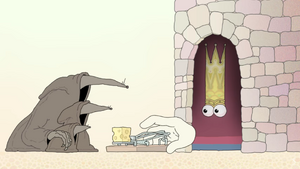 The Double King placing a trap in front of Augustus's subjects. 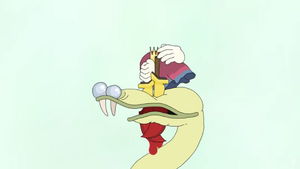 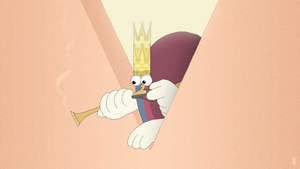 The Double King shooting at the contraption that allowed him to get into Mountain King Olov's crown. 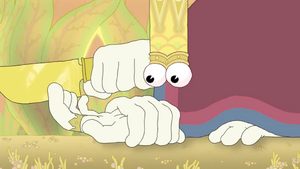 The Double King losing his sanity before cutting off his finger and dying of blood loss. 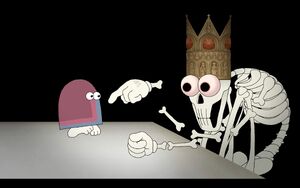 Double King being sent back to his seat by Agatha one of several times. 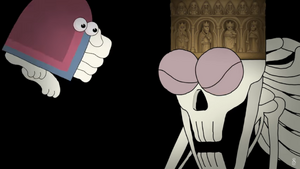 The Double King punching Agatha in the eye in a greed-fueled stupor. 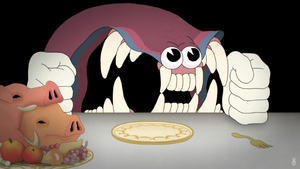 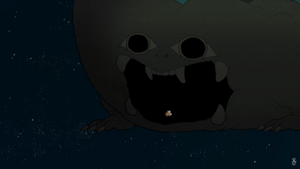 The Double King floating off into space after claiming Agatha's crown. 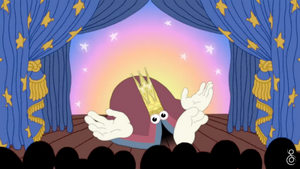 The Double King as seen in the the Patreon video.
Add a photo to this gallery 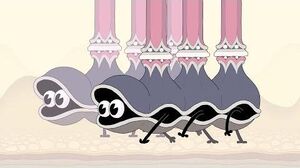 DOUBLE KING
Add a photo to this gallery

Retrieved from "https://villains.fandom.com/wiki/Double_King?oldid=4320975"
Community content is available under CC-BY-SA unless otherwise noted.