Double Trouble (She-Ra and the Princesses of Power)

She-Ra and the Princesses of Power (2018 reboot)

Double Trouble is the central antagonist in season four of She-Ra and the Princesses of Power, and a minor character in season five. They are a shapeshifting criminal mercenary from the Crimson Waste with immense skill as an actor, whom Catra hires to infiltrate the Princess Alliance as a spy and saboteur.

They are voiced by Jacob Tobia and Amanda Celine Miller as Flutterina.

As Double Trouble is non-binary, they are referred to with they/them pronouns.

Little is known of Double Trouble's past, though they are a resident of the Crimson Waste, a harsh desert region known for being populated by outlaws and criminals. Double Trouble made their living as a mercenary for hire, using their shapeshifting and acting skills to impersonate others for money.

For whatever reason, Double Trouble was seen attending Princess Frosta's ball in their true appearance. How they were able to access the party is unknown, though presumably, they were either invited as a 'plus one' or they infiltrated it on their own.

Double Trouble witnesses Adora, Bow, Huntara and Perfuma enter the Valley of the Lost. However they decide to approach Catra to offer their services. They take the form of Scorpia, though their odd behavior quickly outs them and they introduce themself to the force captains. Double Trouble offers to work for the Horde and they convince Catra of their usefulness by fighting Adora using Catra's appearance, successfully fooling the warrior. Following their 'audition' Catra welcomes them into the fold.

Double Trouble infiltrates the Rebellion under the guise of 'Flutterina', and successfully thwarts a number of their missions against the Horde by leaking intel to Catra. This string of losses causes much anxiety for Glimmer, which Double Trouble delights in. Disguised as a general, they plant the idea that the Horde is tracking She-Ra in Glimmer's head, leading her to use Adora as bait and while the queen to finds and attacks a secret Horde base. Catra appears to take a liking to Double Trouble after they rescue her from debris, but they explain they only want her money.

They are instructed to use Glimmer and Adora's friction against them and do so to great effect, causing the two to fight each constantly. Eventually, the Rebellion grows suspicious that there is a spy in their midst, and Double Trouble takes advantage of it to keep them distracted while the Horde takes Salineas. Despite being captured in the end, Double Trouble succeeds in buying the Horde enough time to conquer the seas. They become an uncooperative prisoner, mocking all attempts to get information out of them. However, after Glimmer succeeds with a truth spell, they happily give it to her, telling the queen about Horde Prime's imminent invasion.

Sometime offscreen, Double Trouble makes a deal to sabotage the Horde and Glimmer lets them go free. They return to the Fright Zone and tell Catra that Bright Moon is undefended without She-Ra. They advise her to attack it and win the war, before going to Hordak and exposing Catra's treachery. It is revealed they set up Catra's armies for an ambush by the Princess Alliance, wiping them out. At the same time, Double Trouble goes to Catra and brutally lays bare her flaws and insecurities: her obsession with Adora, her need to be acknowledged and how she drives everyone away and blames everyone but herself. Double Trouble explains to her that they defected as The Rebellion is the stronger force with the Heart of Etheria at their disposal, and that all her work will be torn down, bringing Catra to a despondent state. They then leave, completed their work.

Mermista gets wind of Prince Peekablue frequenting A club and decides that since Peekablue has the ability to see into the universe, the Rebellion could use him to find their friends in space. Thus, she makes a plan to recruit Peekablue, not knowing it was really Double Trouble's new cover identity.

Mermista, Perfuma, Sea Hawk and Scorpia go to the club, searching for Peekablue and discover he apparently works as an entertainer. Scorpia manages to get backstage and tries to convince them to join the Rebellion, only to become suspicious when the performer uses the term "[getting] into character". Scorpia tricks Double Trouble into outing themself and when they try to flee, she stings them, causing them to rapidly shapeshift before passing out. Perfuma ties them up and the group interrogates Double Trouble, who tries to get them to pay for their information before relenting when Perfuma threatens violence.

Double Trouble explains that After Horde Prime's invasion, now jobless, they wandered through occupied territory and decided to pose as a clone to get close to Horde Prime. However, they quickly got bored since they garnered no praise or attention for their abilities and left. However, during their time within the Horde's ranks, they found out Horde Prime had created a barricade with his armada, surrounding the planet, and was viciously angry with Adora for making off with Catra. Double Trouble even became aware that Adora, Bow, Glimmer and Catra were on their way back to Etheria, and that Horde Prime was mind controlling the Etherians via chips. They later learned of Prince Peekablue, and made the decision to disguise themself as him, thinking Peekablue's reputation as a rarely-seen seer was an exotic and irresistible new role to play.

They explain they know nothing of the real Peekablue's whereabouts, but hand over what they know about Horde Prime, and reveal roughly half the patrons at the club have been chipped. Mermista enters and starts a fight, having been chipped herself and Double Trouble, still partially paralyzed from Scorpia's venom, complains about them fighting in an delicate, underwater bubble. They manage to get Sea Hawk to bring them to the stage, where they activate a secret elevator to take them, Sea Hawk and Perfuma away, though Scorpia is left behind.

During the finale, Double Trouble returns to the Crimson Waste to help battle the Horde. They disguise themself as a Horde clone to approach two real clones before shoving the pair off a cliff.

Double Trouble is dramatic and grandiose, befitting an actor. They greatly enjoy performing, seeing their ability to shapeshift as an art that would mean nothing without their skill as an actor, something they take pride in. Double Trouble spends hours in 'character study' to further perfect their performance, ensuring they know their role inside-out. This allows them to flawlessly mimic the personalities as well as the appearances of others.

They are known to be extremely confident in themself and their abilities as an actor and a manipulator. They have been able to approach high-ranking Horde officials like Catra and Scorpia with little to no fear, and even intentionally provoke Hordak despite the obvious danger. Double Trouble is also adept at spinning events in their favor, even while being threatened, taking on a calm and smug demeanor to negotiate and settle things verbally. Even Horde Prime's invasion was of little concern to Double Trouble, who infiltrated his ranks in hopes of getting close to the Horde leader, before getting bored and leaving in search of more interesting work.

Double Trouble can fully analyze a person's character with high accuracy, though they often utilize their skills to inflict psychological harm. With this, they were able to sow descent within the Rebellion and wedge Glimmer and Adora apart, and very obviously enjoyed doing so. They later brutally dissect Catra's personality, identifying her obsession with Adora, craving for validation as well and how she has pushed everyone who has ever cared about her away while refusing to take the blame. Noticeably, Double Trouble had no logical reason to go to these lengths to break Catra's spirit, demonstrating their sadism.

They are known to be quite greedy, caring very deeply for the bottom line. Unlike other characters, Double Trouble consistently references having a job and has looked for new employment. When they meet Catra for the first time, they explain that if she refuses their services as a spy, they will just offer themself to the Rebellion. They make it clear that they are only allied with whichever side is paying, something that is subject to change if a better offer comes around. Most drastically, when Horde Prime invades, their main concern was not self-preservation, but looking for a new income source, and they later get a job as both the host and pianist for a nightclub under two separate identities, with their reasoning being '[they] needed another gig'.

Despite their tendency to accept high-risk jobs and provoke dangerous people, Double Trouble values their life very highly. After realizing the Rebellion is in possession of an ancient super-weapon, they quickly switch sides, stating that they stay alive by always siding with the strongest force. This is again demonstrated when they disguise themself as a Horde clone to join Horde Prime's army in an attempt to curry favor, viewing him as the most likely to win the war. The only time Double Trouble has ever displayed genuine anger was when they were paralyzed by Scorpia's venom while Perfuma, Scorpia and Sea Hawk battled a mind-controlled Mermista in an underwater club, causing the mercenary to angrily yell at them to cease fighting before the flooded the room.

Double Trouble often refers to others with nicknames, even if they are not close, cementing their self-assured and confident personality. Most notably, they call Catra 'Kitten', Sea Hawk 'Hot Stuff', and they usually refer to Horde Prime as 'Big Brother'. Double Trouble commonly calls anyone they are working against 'Darlings'. Additionally, they are known to mock other people behind their backs, using their shapeshifting to transform into caricatures of those they are insulting.

Unlike the other characters, Double Trouble makes absolutely no attempts at justifying or apologizing for their actions. This is in stark contrast to people such as Horde Prime; who states he wants peace, or Catra; who is later remorseful for her deeds. Double Trouble has said they cause problems for the others for the sheer thrill of doing so, seeing nothing wrong with the decisions they make, despite causing immense destruction across Etheria. They are confident in themself and their motivations, never questioning their desire to create drama and taking pleasure in watching the reactions of those around them. 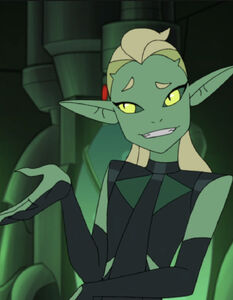