"King of the Jungle" (formerly)

Hanging out with Alistair

Escape from the Maslova Family Circus and become the "King of the Jungle" (formerly).

Doug is the main antagonist of Open Season 3. He is Alistair's former leader and boss and current best friend.

He was voiced by Matthew J. Munn, who also played Boog in the same film.

Doug's main goal is to escape from the Maslova Family Circus and into the wild, reminiscing on how he used to rule a wild life park as its only grizzly bear. When Boog ran into him, it provided him the perfect advantage. He and Boog switched places, and Doug told him that he would be back for him before sunset. Boog was soon told by Doug's best friend and henchman Alistair that Doug was just lying to escape.

Meanwhile, Doug made himself king of the forest and turned Boog's best friends into servants. However, Elliot, Giselle, and their children soon find out that he is an imposter. Doug is soon forced to tell them that Boog is at the circus, which is set to go to Russia. As the animals run to save Boog, Doug once again feels lonesome, and realizes his friendship with Alistair.

That night, Doug ultimately decides to redeem himself, reunites with Alistair (giving him a bear hug, accidentally suffocating him), and sincerely apologizes to Boog for tricking him. He explains that he now knows that he doesn't know what he has until he loses it. Doug's return also allows Ursa to leave as she previously felt that she couldn't because "a Russian circus with no bear is no circus at all." Suddenly, Doug and Alistair are called on for their next performance and they bid Boog and the others farewell before departing.

As the Maslova Family Circus is traveling back to Russia, Doug peeks out his cart window and happily asks Alistair if he is glad they are going back to Russia, to which he jubilantly agrees and says that he hopes he gets to see his girlfriend Carmen. Then Doug and Alistair proceed to sing along to "On the Road Again" as the cats join in.

Doug is sneaky, selfish, and short-tempered at Alistair. His desire to become the ruler of wildlife made him become increasingly conniving and manipulative.

In brief, Doug is Boog's doppelganger, the only difference being his fur and voice. 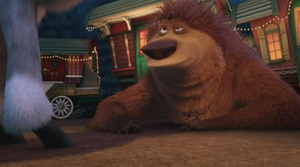 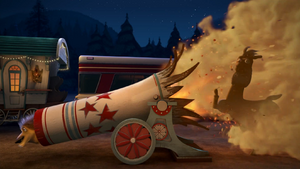 One of Doug's previous failed attempts to escape the circus. 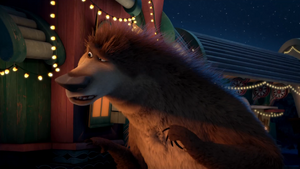 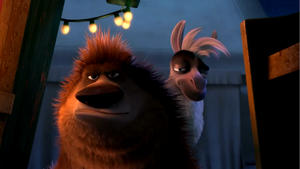 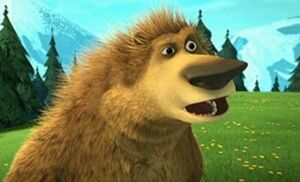