Villains Wiki
Register
Don't have an account?
Sign In
Advertisement
in: Minion, Doctors and Scientists, Animals,
and 49 more

Doug
The Opposite Of Friendly

Help Bellwether bring a new order to Zootopia by turning its prey population against all predators (failed).

Infect predators with "Night howlers" that makes them go savage (partially succeeded, later failed when all of them were cured).

Douglas Ramses is one of the two secondary antagonists (alongside the Ram Thug) of Disney's 55th full-length animated feature film Zootopia (Zootropolis in Europe). He is an emotionless sheep chemist and sniper who works for Dawn Bellwether.

He was voiced by Rich Moore (one of the film's directors), who also played Sour Bill in Disney's Wreck-It Ralph.

Doug first appeared earlier in the film when he almost ran over Nick with his truck and angrily yells "Watch where you're going, fox!". He later appears again posing as a reporter during a press conference following Mayor Lionheart's arrest and Bellwether's usurpation as the new Mayor, as he is listening to Officer Judy Hopps's speech about the mammals that have gone savage. After Judy gives out the details behind the cases and that the savage mammals are members of the predator community, Doug gives out a loaded question ("So predators are the only ones going savage?"), to which Judy inadvertently confirms. This event causes massive panic around Zootopia against its predator minority.

After Judy and Nick realize that mind-altering flowers called "Night Howlers" are the cause of the predators' strange behavior rather than "natural instinct", they then confronted Duke Weaselton, who stole a bunch of Night Howler bulbs from a store earlier. When Duke refuses to talk, they take him to Zootopia's most feared crime boss Mr. Big to interrogate him, as Duke's attempt to steal the flowers almost got Mr. Big's daughter Fru-Fru killed. Out of fear of getting "iced", Duke finally confesses that he sold the Night Howlers to Doug for a good deal of money (the one thing Duke can't refuse). Duke also tells the duo that he and Doug have a drop spot underground where Doug uses a old train car as his own lab to harvest more Night Howlers, and warns them that Doug is the complete opposite of friendly: he's unfriendly.

Judy and Nick find Doug's secret base and realize that Duke is telling the truth. As they investigate, Doug suddenly enters the room wearing protective clothing, forcing both Judy and Nick to hide to avoid being seen. Recognizing Doug as the sheep who almost ran over Nick and the reporter from the press conference, both Nick and Judy watch as Doug takes a pot full of Night Howlers, and dumps it all into a vat. After a turn of the dial, the Night Howlers are liquefied and piped to the other side of the room, where the liquid gets sent through a chemistry set. With a few tweaks and modifications, the now enhanced Night Howler toxin is placed within a small glass paintball-like pellet, which is then loaded into a dart gun.

Once he has completed the serum, Doug gets a phone call. The undisclosed caller tells him of his next target: a cheetah in Sahara Square. During the conversation, Doug assures the caller's doubts that he can hit the cheetah despite their speed by revealing that he "hit a tiny little otter through the open window of a moving car". These words and the sight of photos of all the "savaged" predators on Doug's subway bulletin map, make Judy realize that the reason why Mr. Otterton, Mr. Manchas, and all the other predators went savage is because Doug had shot them with the Night Howler darts without being noticed. Two tough rams called Woolter and Jesse arrive at the lab bringing a latte for Doug, who demands to know if it's got extra foam on it. At that point, Judy shoves Doug out of the lab, and successfully operates the subway car so that they can get the evidence to the ZPD hoping to clear the predators.

As Doug recovers from the hit and proceeds to mope over his ruined latte, Woolter and Jesse realize that the train is moving and immediately chase after it, leaving Doug behind. Woolter and Jesse attack the train in hopes to stop Judy and Nick, but after a brief scuffle, Jesse gets knocked off to avoid being run over by the car, and Woolter is knocked out of the car to hit a lever to change the train track to avoid impact with an oncoming train.

When Judy and Nick attempt to head to the ZPD to present the evidence (a case containing the dart gun and the serum pellets), Bellwether approaches them with a trio of rams dressed as police, politely asking them for the evidence. However, this makes Judy and Nick realize that Bellwether is behind all of this (and presumably the mysterious caller who contacted Doug). Realizing that the ploy is off, Bellwether orders the rams to go after them, and one of them successfully traps the duo in a display at the Zootopia Natural History Museum. The rams watch without emotion as Bellwether fires a dart at Nick to turn him savage and make him kill Judy while calling the ZPD to the scene as another outbreak demonizing predators. However, it turns out that Nick switched the serum pellets with several blueberries from Judy's farm in order to trick Bellwether into confessing her plan for Judy to record on her carrot pen, something which Bellwether did not notice until too late with several ZPD officers arrive to arrest Bellwether. It is completely unknown what happened to Doug afterwards since he is not seen again for the rest of the film after Woolter and Jesse leave him in the subway station, but it is fair to assume that he retreated into Zootopia's underworld.

Doug is portrayed as stony, calm, and exceptionally cold. He almost never shows any facial expression beyond a cold and flat face, and rarely raises his voice, usually speaking in a low, flat, emotionless voice. According to his employee Duke Weaselton, he is "the exact opposite of friendly", implying that he is hostile towards his allies and enemies alike. Although this side to his personality is not much further explored, it can be seen with his attitude towards his ram associates Woolter and Jesse when they deliver a latte to him, coldly warning them that the latte had "better have the extra foam this time", and his attitude towards Nick Wilde, whom he aggressively warns to "watch where you're going!" after he almost runs him over (this is notably the time he is seen raising his voice).

Although Doug is very competent and skilled in his chemical expertise and marksmanship, he does not appear to enjoy or dislike his job, nor take it seriously, as evidenced when Judy shoved him out of his lab-converted subway car, he merely sat idly and drank his half-spilled latte while Jesse and Woolter chased after the train when it started to move. This was also shown when he shrugged off Bellwether's doubts that he was capable of sniping a cheetah despite their speed, casually (but confidently) declaring that he could do so. 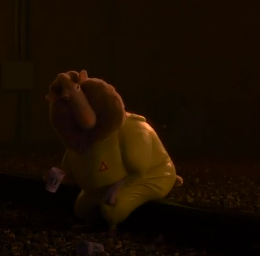 Doug gets left behind by Woolter and Jesse.