Lashing out at anyone (save Dayu) unlucky enough to be near him.

Doukoku Chimatsuri is the leader of the Gedoushu, a group of Ayakashi that dwell within the Sanzu River, and the main antagonist of Samurai Sentai Shinkenger.

He was voiced by Rintarō Nishi, who also portrayed Lieutenant Colonel Shadam from Gosei Sentai Dairanger.

Originally, Doukoku was in a state of rage all of the time until he heard the music of Usuyuki and forced her into servitude when she was reborn as Dayu Usukawa. However, while fighting the seventeenth head of the Shiba House, he was sealed away as the previous Shinken Red died.

But the plan failed, due to Juzo Fuwa's own agenda, Doukoku has his forces carry on the original plan without giving wind of this knowledge to any Ayakashi with his own agenda. During the summer while in a comatose state that leaves him open to his enemies,  Doukoku makes an alliance with Akumaro Sujigarano before learning of his true colors and risking his life to enter the mortal realm and repair Dayu's shamisen after driving off Akumaro and defeating Shinken Red.

Doukoku's followers attempt to speed up his awakening by increasing the amount of suffering until Dayu uses Shinza's anguish to bring Doukoku back to the mortal realm. Assuming his second life, Doukoku overpowers Samuraihaoh, blasting it and throwing off its components. However, the Shinkengers take advantage of the events and mortally wound him before he explodes. He attempts to take the Shinkengers down with him, but this fails as they survive the explosion.

Doukoku is later revived during the events of the Super Hero Taisen films, the first as a member of the Dai-Zangyack. He is seen fighting GaoBlack, and the Dairangers during the final battle, though his fate was unknown.

He also revived in Super Hero Taisen Z with Space Reider and a few other past enemies, including his servant Dayu and his monster Chinomanako. They were giving the Gokaigers, Go-Busters, Meteor, Fourze, OOO, and Beast a hard time, until Akaranger and Ichigou showed up with reinforcements to even the odds. Doukoku was seen fighting HurricaneRed and Kamen Rider X. He and the others were eventually destroyed when everyone lined up and used their finishing attacks.

He is sadistic, wicked, arrogant, oppressive, cruel, inhumane, unpleasant, and obstreperous. As an embodiment of rage, he is in a constant state of it, which can only be soothed by sake and Dayu's music on her shamisen. He is quick to aggravation and easily vexed, which makes him easy to manipulate and easy to make enemies. While not much on the intelligence department, he makes up for it in sheer hatred and rage. 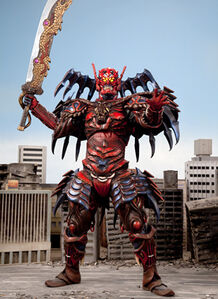