Cult leader (of the Eternal Paradise, till his demise)

Douma is a nihilistic, disturbing, sociopathic and condescending individual who pretends to be outward friendly. Unable to comprehend human emotions, he admits that even during his human days, the entire concept of emotion itself was completely alien to him. Aware that this is abnormal, Doma compensates his empty "heart" with lies, learning to fake his emotions enough to deceive all but the most keen observers. But when he encountered a woman named Kotoha, he spared the woman out of curiosity, was even going to keep her alive until she would reach an old age - until Kotoha discovered his unholy secret. Kotoha attempted to run away from Douma but was futile: she was killed and eaten just like all other hapless female victims before her. Although Douma might have had feelings towards her to some degree, it was no more than mere possessiveness.

A special feature of Douma is his favor in targeting female humans to devour, believing it is an act to absolve them. While he may appear caring toward his comrades, he doesn't feel genuine grief over their deaths, since he sees his followers as nothing but pitiful pests below him. This heavily contrasts his colleague, Akaza, who refused to eat women, much to his confusion and disbelief.

These traits implies that Douma is a psychopath: he shows a general lack of empathy since he was a child, despite an outward charismatic appearance.

Douma rarely acts anything but relaxed and serene to highlight how disturbing he is. Even as a human, when his mother violently murdered his father before killing herself, his only priority was airing the room out from stench of blood emitted by his dead parents. This is up to the point where he doesn't feel anything even when his crimes ultimately caught up with him and lost his own life.

After killing Shinobu, Douma confronted Tsuyuri Kanawo, who pointed out Douma was unable to feel emotions. Shocked and infuriated, Douma proceeded into attacking Kanawo and was about to kill her, but Innosuke interrupted him and saved Kanawo. Douma then managed to overpower the two Demon Slayers until suddenly, the Wisteria Flower Poison in Shinobu's corpse took effect and started to melt Douma's body.

Unable to fight back, Douma realized he was tricked but it was too late. He was soon decapitated by the combined force of Kanao and Inosuke, avenging Shinobu and her family. Trying to struggle for survival like Akaza, but lacking indomitable willpower as Akaza had, Douma's head slowly disingtigrated and he met Shinobu's soul in the limbo, holding his severed head. Shinobu had refused to pass onto heaven until she personally saw to Douma's death.

Ironically, Douma discovered that he was in the afterlife he once tried hard to deny, and he finally began to exhibit some emotion. He claimed that he fell in love with Shinobu and invited her to be his company to Hell. However, Shinobu, with her face still smiling (albeit dumbfounded), gleefully rejected and cursed Douma one last time as the latter was condemned into Hell off-screen.

In the Dimensional Infinite Fortress, Inosuke happily stepped on Douma's ashes to spite him, finally avenging his mother as well in the process. 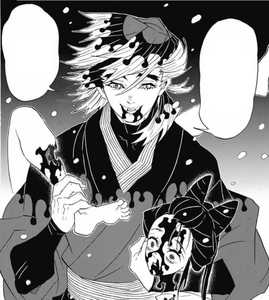 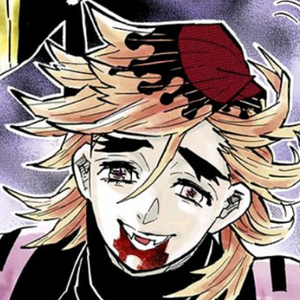 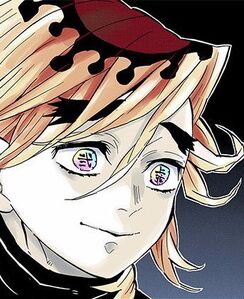 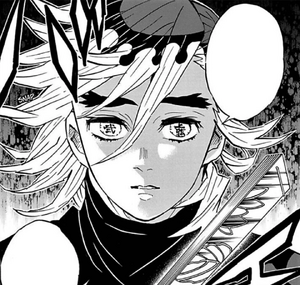 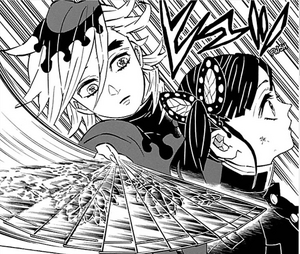 Retrieved from "https://villains.fandom.com/wiki/Douma?oldid=3630192"
Community content is available under CC-BY-SA unless otherwise noted.