They are led by Simon Marcus, a Deputy Officer of the United Nations, and their personnel includes mad scientist Keiji Uraga. They emerged some time after Killbus was defeated and the rest of Team Build got their memories restored.

Downfall then sent Phantom Crushers to track down and disable the transformation abilities of the other Kamen Riders. However, with assistance from the New World Takumi Katsuragi, Sento Kiryu was able to develop a concoction from Nebula Gas that restored the Riders' ability to transform.

The Kamen Riders then attacked Downfall and defeated all of their members, liberating Japan from their grasp. 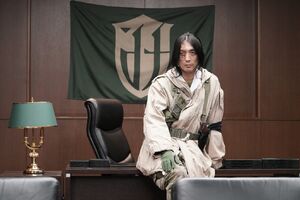 Retrieved from "https://villains.fandom.com/wiki/Downfall?oldid=4053423"
Community content is available under CC-BY-SA unless otherwise noted.