Continuously abuse Linda and Frank until they're dead.

Doyle Hargraves is the main antagonist of the 1996 drama film Sling Blade.

He was portrayed by Dwight Yoakam, who also played Raoul in Panic Room.

Doyle first appears as the abusive live-in boyfriend of a widowed rural Arkansas woman named Linda Wheatley and her son, Frank. He would often make fun of the boy's deceased father and threatened to kill the two on numerous occasions, especially when he got drunk. At one moment, Doyle told the boy that he would be sorry "his daddy ever squirted him out". However, Linda was so dependent on Doyle that she refused to throw him out. A mentally retarded man named Karl Childers (Billy Bob Thornton) comes to live in the garage with Frank and Linda, much to the chagrin of Doyle, who abuses Karl verbally, claiming that they are just jokes. Karl quickly becomes a father figure to Frank, who misses his father and despises Doyle, and Doyle becomes increasingly abusive toward Karl and Frank, leading to an eventual drunken outburst and physical confrontation with Linda and Frank. Linda kicks Doyle out of the house, telling him to go home and sober up. The next day, Linda and Doyle reconcile. Knowing that he has the upper hand again, Doyle confronts Karl and Frank and announces his plan to move into the house permanently; he plans "big changes", including Karl's removal from the house.

Karl begins to realize that he is the only one who can bring about a positive change and thus spare Frank and his mother a grim fate, likely death. Unbeknownst to Doyle, Karl killed his adulterous mother and her lover when he was a child, and after realizing that if he lets Doyle continue with his abuse, both Frank and Linda will either be seriously hurt or injured, Karl sharpens a lawnmower blade and makes Frank promise to spend the night at Vaughan's house, and asks Vaughan to pick up Linda from work and have her stay over also. Later that evening, Karl returns to Linda's house and asks a drunk Doyle how to reach the police by phone. Doyle, not taking Karl seriously, tells him to call 9-1-1. Karl kills Doyle with two blows to the head with the blade. Karl then calls the police to turn himself in, sacrificing his freedom for Linda and Frank's safety, also requesting that a hearse be sent for Doyle.

He is depicted as a vulgar, abusive, homophobic, racist control freak with an explosive temper and an alcohol addiction. When he was drunk, he would get furious and often beat on Linda and Frank. 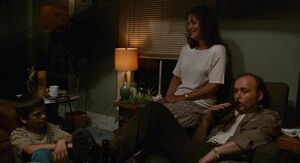 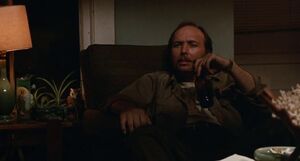 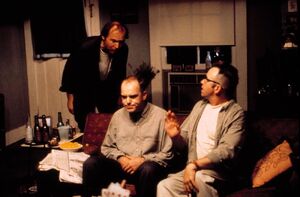