Playing with his daughter Mineva.

Vice Admiral Dozle Zabi is the commander of the Principality of Zeon's Space Attack Force and a major antagonist in Mobile Suit Gundam. He is the third eldest of the Zabi siblings, as well as the father of Mineva Lao Zabi.

He was voiced by the late Daisuke Gōri in the original TV series, and by Tesshō Genda in the compilation movies.

Dozle is the third born son of Degwin Sodo Zabi. After Zeon Zum Deikun's demise and the Zabi Family's ascension to power, Dozle became the commander of Zeon's national guard and eventually the Vice Admiral in charge of its Space Attack Force. In The Origin, Dozle also served as the headmaster of Zeon's military academy and was the one who originally developed the Mobile Suit theory, though he later gave up this position to serve as one of the commanders of Zeon's military.

In The Origin, Dozle was the one tasked with carrying out the Operation British plan developed by his older brother, Supreme Commander Gihren Zabi. Said plan involved using G3 nerve gas to exterminate the population of a Side 2 colony and then dropping said colony on Earth. Despite Dozle's own reservations about the plan and the refusal of Captain Ramba Ral to participate in it, Dozle chose to go through with it anyway, believing it was a necessary evil for the cause of Spacenoid independence and suppressing any reservations he had about the millions of deaths it caused.

He is first seen when he is angered that Char did not show up at his victory dinner so he had to call off the invitations. With a scar on his face, despite being a brute, he is good to his men. Dozle had always looked forward to seeing that his youngest brother, Garma become admiral, but that wish did not come true. For Char's failure to save Garma, the commander throws the Red Comet out of his division. His hatred for his sister Kycilia only grew when Char was brought into her own division.

Much later in the One Year War, Dozle's command base, Solomon was attacked. While the Earth Federation attacked the base, Dozle ordered all personnel in the base to be evacuated. In a last stand, Dozle takes to the battle in the Big-Zam mobile armor with an impenetrable shield. Thought disadvantaged at first, Amuro's friend Sleggar Law sacrifices himself to ensure Amuro's victory. With the Big-Zam damaged, Dozle takes a machine gun and tries firing on Gundam with no effect. Suddenly, Amuro saw a flash of light and escapes the Big-Zam's explosion that consumes Dozle.

Dozle is a man firmly devoted to the Zeon cause. A committed family man, Dozle cares greatly for his father, his brother Garma, his wife Zenna and his infant daughter Mineva. He also greatly respects his older brother, the supreme commander of Zeon's armed forces, Gihren, believing him to be a brilliant genius doing what is necessary to lead Zeon to victory

Despite his brutish stature, Dozle is also an excellent field tactician as well and excels at commanding his men, whom he treats well. During the last stand at Solomon, Dozle ordered the rest of his men to evacuate while he single-handedly held off the EFF himself in the Big Zam mobile armor. In spite of these honorable traits, however, Dozle's fervent belief in the Zeon ideal is so extreme that he will carry out virtually order given to him by his brother Gihren, even if it includes committing objectionable war crimes such as gassing civilians. While Dozle does indeed hold reservations about killing innocents and is aware on some level that it is an unforgivable act, he suppresses his feelings of remorse in order to serve as an effective Admiral and protect his men and family. 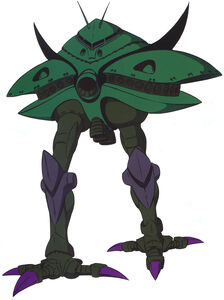