Prove his research to the world.

Dr. Adams Teufel, also referred to as Dr. Adams and Dr. Teufel, is the creator of the High-Teen Number Cyborgs and one of the main antagonists of the Cyborg 009 vs. Devilman OVA.

His goal is to create a "Cyborg Demon" to prove his research. He is also the father of Edward/Cyborg 0014.

While a researcher for Black Ghost, Dr. Adams at one point worked alongside Dr. Gilmore. Adams was initially kicked off the 00 Cyborg development team for his abnormal ideas but was later authorized by Van Vogt to develop his own line of Cyborgs.

Adams and his son Edward were later in a laboratory accident that cost Adams his right eye and critically injured Edward. Thus, Adams made Edward the first cyborg in his project, remodeling him into Cyborg 0014. 0014 was eventually joined by Cyborg 0015, 0016 and 0017.

Dr. Adams at some point began working on Cyborg 0018, who he intended to become a "Cyborg Demon". Adams used a comatose boy named Seth for the project and convinced Seth's sister, Eva/0015, that the project would cure him from his coma. In reality though, Seth would be completely overtaken by the demon Atun.

Adams had 0015 kidnap Miki so he could use her to lure out Devilman to help awaken Atun. Dr. Adams eventually succeeded in fusing Atun with Seth's body. He informed Eva that Seth's personality had been completely overtaken by Atun before laughing maniacally. However, Atun had no desire to be controlled. When Adams ordered Atun to prove that he was the greatest cyborg researcher, Atun snapped his neck. 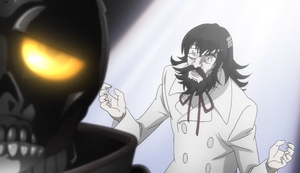 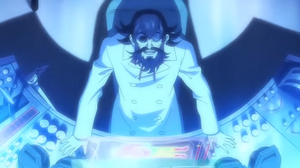 Adams observing 0018's development
Add a photo to this gallery

Retrieved from "https://villains.fandom.com/wiki/Dr._Adams_Teufel?oldid=4002898"
Community content is available under CC-BY-SA unless otherwise noted.