Co-Founder and Supreme Leader of the Umbrella Corporation

Start a biblical apocalypse in order to kill off most of humanity by utilizing the T-Virus.

Have Umbrella Corporation and tens of thousands of its employees as survivors in order to rebuild the world in his image.

Dr. Alexander "Roland" Isaacs is the main antagonist of the Resident Evil film series, serving as the overarching antagonist through the first five films before later appearing as the primary antagonist in it's concluding instalment Resident Evil: The Final Chapter. He was the co-founder and supreme leader of the Umbrella Corporation, as well as being the true mastermind behind the T-Virus apocalypse. Moreover, he was the ultimate arch-nemesis of the series' protagonist Alice.

Additionally, Dr. Issacs served as the counterpart of Oswell E. Spencer from the game series that the films were based from.

He was portrayed by Iain Glen, who also portrayed his clones, Ralph D'Amico in Kick-Ass 2 and Manfred Powell in the 2001 film Lara Croft: Tomb Raider.

Dr. Alexander Isaacs was a tall, middle-aged Caucasian man of British background. He had sea-green eyes, and dark blonde hair. He is a religious man and the Chairman and Co-owner of the Umbrella Corporation and the Head of the Umbrella High Command.

Dr. Alexander Isaacs was one of the co-founders of the Umbrella Corporation, along with his old friend and the corporation's sole originator Dr. James Marcus. At somepoint, Marcus created the T-virus to be used a regenerative tool for his daughter Alicia. This ended in disaster and prompted Marcus to try and shut down the corporation, to which Dr. Isaacs protests by insisting that they use the T-Virus for military purposes. When Dr. Marcus refuses and asserts that his mind is made up about shutting down the Umbrella Corporation, Issacs betrays Marcus by arranging his right-hand man Albert Wesker to murder Dr. Marcus. This in turn made Dr. Isaacs the corporation's primary shareholder, whereas Dr. Marcus's daughter became it's second major shareholder. He even choose to raise Alicia as his own surrogate daughter after having Wesker kill her father.

Dr. Isaacs soon held a meeting with the Umbrella High Command, including his subordinate Wesker and the corporation's secondary shareholder Alicia Marcus. He convinces them that the Apocalypse was inevitable and proposed a method by which they can create an Apocalypse using the T-Virus. This will cause the Apocalypse to take place, killing most of humanity. While this happens, almost all Umbrella Employees and other worldly elites will rest in cryo-statis deep inside the H.I.V.E. as a sort of Noah's Ark for Umbrella. When the apocalypse passes the remaining tens of thousands of survivors in cryo-statis will "reboot" the world and create a new world in Dr. Isaac's image.

All of the Umbrella High Command agreed to this. Despite Alicia reluctantly agreeing to this, she secretly plated this particular memory inside the Red Queen in hopes that Dr. Isaacs and Umbrella will be stopped. Isaacs has all of the Umbrella High Command, Alicia Marcus, himself and other worldly elites put in cryostats deep within the H.I.V.E. while Wesker became the acting Chairman of Umbrella in Dr. Isaacs' absence. Dr. Isaacs even created two clones of himself, one of which he dubbed Dr. Sam Isaacs to take charge of Umbrella's Science Division. The other clone, dubbed Alexander Issacs, was authorized to act in the real Issacs' stead whilst the real Issacs himself rests in cryostats - awaiting for the T-Virus Apocalypse to come to fruition.

Dr. Issacs' endgame commenced with Samuel managing an incident at The Hive, which was re-opened by Umbrella commandos under the orders of Samuel's co-worker Timothy "Major" Cain. This caused a disaster - originally perpetuated by Umbrella agent Spence Parks under Samuel's orders - that resulted in countless Zombies and Lickers escaped the facility, thus causing the T-Virus to consequently overrun Raccoon City. The two survivors of the incident, Alice and her friend Matt Addison, were experimented on by Sam - who blamed Major Cain for his division to unwisely reopen the Hive against the containment procedures. Nonetheless, Alice and Addison - who were stowed away from the apocalypse that quickly overwhelmed Racoon City - became subjects of the Nemesis program.

Following Major Cain's death and the bombing of Raccoon City, Sam Isaacs was distraught to learn that both Alice and Addison had perished in the explosion. But he was able to recover Alice's body from the wreckage of the helicopter she used to escape, and moved her and his work to an Umbrella facility in Detroit. After three weeks of experiments, Alice was revived with incredible new powers. Unfortunately, she retained her memories and escaped, being rescued by Jill Valentine, Carlos Olivera, and Lloyd Jefferson Wayne. But Isaacs had one last trick up his sleeve, and as Alice makes her escape, he activates "Project: Alice".

Umbrella soon had bigger problems than one escaped experiment, however. It was soon discovered that the T-Virus had escaped Raccoon City, and began spreading rapidly. The world was overrun in short order, the only survivors being the civilians who stayed on the road, and Umbrella Corporation employees, who took shelter in underground facilities across the planet. Isaacs himself took charge of the research in an underground lab in the Nevada desert, trying vainly to track Alice across the wasteland that North America had become over the last five years. All the while, he maintained a combative relationship with Wesker.

Upon attempting to recreate Alice in a cloning program that he creates on his own, Sam Issacs attempted to use the clones ' blood to "domesticate" the zombies - making them tame enough to allow humans to return to the surface. This was possible because, as he discovered, while the zombies hungered for human flesh, they derived no actual sustenance from it, and could remain active for decades or more. The results did succeed in raising the intelligence of the test subjects, but resulted in a stronger infection.

Finally realizing that only the real Alice could bring him success, Sam Isaacs falsified orders from Wesker and took a strike team into the wastes to deactivate and retrieve her. He made camp in the ruins of Las Vegas, setting a trap with the Enhanced Zombies to kill her so they could retrieve her corpse and take a sample of her blood.

The scheme did not go as he had planned. Alice massacred the strike team with incredible speed. After an unsuccessful attempt at deactivating her, Isaacs was bitten by an Enhanced Zombie. He returned to the lab and was placed under house arrest. He injected himself with large quantities of the Anti-virus, but his condition continued to deteriorate. Moreover, Wesker summoned Samuel' superior Alexander Slater and ordered him to dispatch Samuel for his failure. Slater initially carried out the order by confronting and then shooting Samuel in the heart, but it was too late as Isaacs had already begun to mutate into into a grotesque tentacled monster; the mutated Samuel proceeds to kill Slater and everyone else within the facility. This alerted the facility's AI, dubbed the "White Queen", who sealed the mutated Samuel in the lower levels.

Later on, Alice entered the facility, and after consulting with the White Queen, descended into the lower levels to confront the mutated Samuel. They fought in a replica of the Arklay mansion, which culminated in the pair ending up in the reconstructed "Laser Room." The mutated Samuel is about to slaughter Alice, boasting that she was not the future as he had previously thought before saying to her "I am the future.". Alice responded by saying "No, you're just another asshole." - and that they were both going to die down there. In that moment, the laser grid activates - controlled by a newly-awakened Alice clone - and sliced the mutated Samuel into cubes before he could dispatch Alice. The laser grid stops before it could slice Alice, and she watches as the mutated Samuel collapses into cubes - signaling his death and putting and end to his deranged threat for good. However, it is later revealed that this Isaacs was merely a clone.

After Alice discovered herself captured and handcuffed in the brig of an Umbrella tank, Dr. Alexander Isaacs came to check on her. It was then that Alice realized that the mutation she took care of was merely one of Isaacs's clones. He proceeded to engage in combat with her once Alice escaped from being zombie bait. After Alice unlocked the tank's motorcycle compartment, Isaacs teased her by saying that she can't use the vehicle, reminding how Alice tried the first time but ended up being electrocuted. Thus, Alice chopped off Isaac's left hand to gain access to the motorcycle and escaped from Isaacs's clutches. Isaacs cried in pain as he made his way back inside the tank to be treated.

Dr. Alexander Isaacs is a religious and misanthropic individual who had a devout faith in God. He truly believed that Umbrella had to "orchestrate an Apocalypse", similar to the Great Flood God released to cleanse the world of humanity's corruption, leaving a few chosen ones to survive and recreate the world in their own image using Umbrella's advanced technology, manpower of clones and resources. He even wen so far as to use the Holy Bible to prove his point. This shows that he truly is deeply religious and believes in everything he says to the Umbrella High Command. All in all, the original Isaacs was a ruthless and sadistic psychopath. 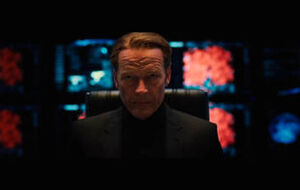 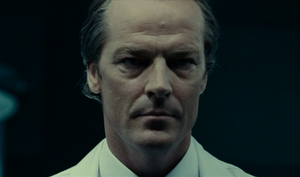 Dr. Isaacs after being attacked by Alice in Resident Evil: Apocalypse

Dr. Isaacs at an Umbrella meeting with his boss, Chairman Albert Wesker

Dr. Isaacs watching one of his colleagues getting eaten by a zombie test subject

Dr. Isaacs after being bitten by an enhanced zombie

Dr. Isaacs after injecting himself with too much antivirus

Dr. Isaacs in the early stages of his mutation

Dr. Isaacs being diced by a laser grid