Dr. Augustus Scratch is the main antagonist of the Wax Works horror attraction at Knott's Scary Farm. He is a sadistic and psychotic wax sculptor who uses live people in his various art projects and wax creations.

While not much is known about Scratch's background, it is known that he was once a renowned plastic surgeon obsessed with beauty and perfection. Through an unknown series of events, he left or was kicked from the industry. In another unknown series of events, he was horrifically disfigured, leading to him wrapping his face in bandages. He hid away in an abandoned wax museum and began working with the material to create his depictions of perfection, but quickly became obsessed and decided to begin using humans in his twisted artwork.

In the attraction, upon entering, guests are immediately greeted by all-too-lifelike wax figures, and one of the doctor's still living victims, who has had her face replaced by a wax mold and is left a mentally broken woman lunging at the visitors. As the guests go deeper into the attraction, they find that some of the wax figures are still screaming, and some have bloody bones and organs falling out of them. They then come across one of the doctor's wax-faced minions dipping a screaming woman into molten wax as she pleads for mercy. The next hall reveals shelves of severed limbs, some of which are affixed to chains and being coating in wax.

Upon entering the museum portion, the guests finally come face-to-face with Dr. Scratch himself, who is sadistically showing off the walls lined with wax replicas of everything from American historical figures to Universal Monsters, all with patches revealing human skeletons underneath. He chases them down a hall, where they see a still-living man being ripped in half on a rack and a recently-used guillotine with a headless corpse still there. Dr. Scratch then shows off a man being electrocuted to death in an electric chair, gloating about how he will be used in his next work of art: a web of hot wax with human faces and body parts tangled within. He sics his henchmen on the guests, who try to drop a shelf on top of them.

Dr. Scratch then shows off that the wax is made by bees kept right on the property, and that the beehives are human corpses that he has hollowed out. Nearby is an insane little girl with doll parts sewn to her face, screaming how the doctor is going to kill them all. He then revels what he gloats is his greatest creation: an amalgamation of human heads, spines, and ribcages into a massive centipede-like wax sculpture.

The guests flee through the wax works, coming across women being dipped into vats of molten wax, one of which being still alive and pleading for help as her skin melts from the heat. Dr. Scratch attacks and tries to force the guests into metal chambers, but they escape through corpses and skeletons suspended from chains.

Dr. Augustus Scratch is a mad artist obsessed with beauty and perfection, and is willing to go to horrific, homicidal lengths to achieve his twisted vision. He cares nothing about his victims or his henchmen, only focusing on creating as many "pieces of art" as he possibly can. He is egotistical and arrogant, showing off his work and gloating about it to future victims, and taking pride in the horrific works he produces. 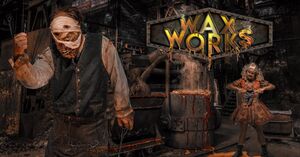 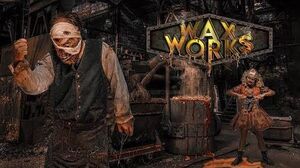 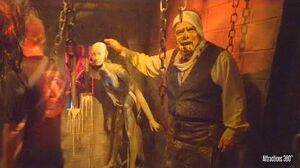