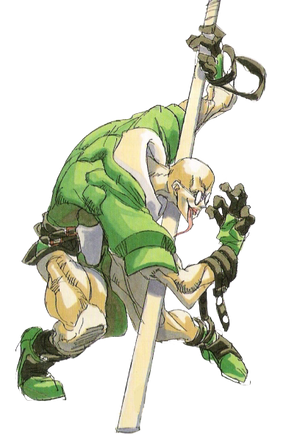 Dr. Baldhead is a character in the Guilty Gear franchise. He debuted in the first Guilty Gear game, and it is widely speculated that he and Faust are the same person.

In the days he worked as a physician, Dr. Baldhead was a generally benign man. However, the mysterious death of one of his patients deeply traumatized him and severely weakened his grip on sanity. With his morals and good nature lost to madness, he became a violent murderer.

Dr. Baldhead used to be an ingenius physician, who was very famous for his skill, loved by many, as well as children in particular. He was unwittingly caught in a rivalry with other surgeons of renown and influence, and they conspired against him and made use of the Organization of Assassins through the Post-War Administration Bureau to cause him to think he’d allowed a single girl in his care to die. When the little girl died on the operating table, Baldhead robably could scarcely believe it was his own doing with her in his arms. Or maybe perhaps he did blame himself. The fact remains that when she died, he lost himself, and began to kill scores of innocent people. For a time he was captured and locked away into a Dimensional Prison, until one day a mysterious man in black who looked like the Grim Reaper appeared, and freed Dr. Baldhead, at the same time giving him back his giant Scalpel.

Shorly after being freed from the Dimensional Prison, Dr. Baldhead was sent into the bloodbath that was the 2nd Sacred Order Selection Tournement, and despite the chaos surrounding it relating to Gears and not himself, he managed to survive. Surrounded by the throngs of people so grateful to being saved from Justice, the Herald of Destruction... not even caring who their savior truly was... he forgot his madness and fell in to reverie. He began to have visions of the little girl who told him it wasn't his fault for her death, and that it was simply her time to go. Baldhead then fled into the night, never to be seen again, as rumors of a healer with god-like abilities surfaced (seemingly Faust).

Dr. Baldhead's gameplay style is generally exactly the same as Faust's, with the only real difference being Baldhead having some different attacks and special moves. 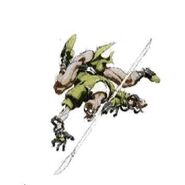