Stop King Womp from assimilate every Klay World's Klaymen into his own group.
Have all of the Klaymen kill each other.
Kill Chip Brown.

He was voiced by the series' creator Robert Benfer.

Dr. Bob is incredibly arrogant and egotistical individual who almost never admits his own shortcomings. He can be exceptionally vituperative, insulting, abusive and even generally cruel to his patients and has never been seen having an emotional reaction when one of them dies.

He puts very little effort into his work as a doctor, despite often saying that he did all he could. Despite this, he still often becomes insulted and visibly lashes out when his skills as a doctor are insulted. It was revealed in Klay World: All Gone that he actually can be a good doctor, and has been in the past, but rather prefers to carelessly kill his patients because he knows he can just rebuild them later.

He is also shown to be very selfish and manipulative, as he has been seen leaving surgeries to get food, stealing from patients, and demanding money from people even though his patient died.

Dr. Bob made his first appearance in the 2003 episode simply titled Dr. Bob. In the video, he was established as a horrible doctor by killing several patients, including one that was in for a simple check-up. By the end of the video, he stated that he was proud of his work.

Dr. Bob makes a second appearance as one of the main characters in the six-part Klay World special in 2003. The special featured many of the series early characters such as The Seed, The Newspaper Monster, Henry, and Hulky. In it, all of the Klaymen in Klay World are pulled together to fight off an alien invader. He hurts more than he helps throughout the special by killing several of his teammates in their many fights.

In the finale, he was crushed by the alien but miraculously survived.

In his second first Dr. Bob attempted to save a Klayman who was choking on a bologna. He decides that the best way to help him is to perform surgery. He later fails and pronounces him dead. He claims to have saved the day and shoots the Klayman who questioned it, killing him.

A green Klayman suffers from a headache and a stomach ache due to another Klayman throwing spikes at him. Dr. Bob attempts to remove the spikes but pulls to the side which tears the Klayman in half.

He, Chip, Rick, Pick, Mr. Black and Smiling Gary all investigate the aliens who contacted Smiling Gary one day. When Chip, Mr. Black, Smiling Gary and Pick leave the table on a truck to find the aliens, Dr. Bob and Rick stay at the table, he is often seen hanging around with Rick or giving Marv orders to build some device to contact Chip and the other Klaymen on the adventure off of the table. He is also interviewed by another Klayman. When a Klayman is getting a heart attack, Dr. Bob doesn't do anything about it. When the interviewer tells him to save the dying Klayman, Dr. Bob walks to the Klayman in harm and crushes his head, killing him. The interviewer and some other Klaymen around him insult him and call him a bad Doctor. Dr. Bob is upset with this, especially when even Vince goes against him.

Eventually, when the Aliens arrived at the table and began killing the klay people. However, Dr. Bob and the majority of the Klaymen chose to escape by climbing down the table. Dr. Bob suggested that they leave the house from there and find another klay world, but ultimately the klaymen decided to fight back to reclaim the table.

Dr. Bob was later slashed by King Womp and lied helpless after that. Chip arrived when there is only Dr. Bob and two other Klaymen alive. Chip told them that he had to get his uncle's time machine so he could stop everything from happening. Rick returned, except he was rebuilt and became hostile towards Chip and the others. Dr. Bob didn't do anything, and he simply watched the others fight.

Rick seemed to have the upper hand after he killed Chester and Dr. Brown and the time machine was left on the top of a TV set. However, Chip then discovered his ability to extend his arms and knocked Rick off the table.

King Womp was the last remaining alien and he grudgingly returns to finish the job himself. Dr. Bob then grabbed the axe out of the Axe Klayman's face (killing him) and threw the axe at King Womp while he was chasing Chip, killing him.

Rick returned and stole the time machine when Chip was almost at it. Rick explained that he intended to use the time machine to go back in time and make sure the aliens won. However, Pick (Who somehow survived the train crashing into the car with him inside) drove through the window and impaled Rick on the truck's flag. The time machine was unfortunately destroyed.

Dr. Bob, Chip and Pick (The only three Klaymen alive) wondered how they will save Klay World. Thanks to Pick, they came up with the idea to simply rebuild all the Klaymen like the Aliens did.

After the defeat of the Aliens and the rebuilding of Klay World, Dr. Bob gave one final motivational speech in front of all of Klay World.

Dr. Bob attempted to split a pair of conjoined twins with a chainsaw. Unfortunately, he cut horizontally, killing them instantly. Then a bystander criticized his treatment, so he threw the chainsaw into the man's chest, also killing him.

Henry's friends celebrated the fact that Henry had given up his shotgun. Unfortunately, one of his friends decided to give him a gift, a fully automatic machine gun. An ensuing struggle resulted in two of his friends dying and Henry getting the top of his head shot off.

Henry's friend sees Dr. Bob kill two patients and asks him to help save Henry's life. However, Dr. Bob was growing wearing of doctoring and decided to retire. He dropped his lab coat to the ground and walked off into the distance.

The special begins at a party that he threw for everyone in Klay World. Having given up doctoring, he wore a regular brown jacket.

He revealed to Chip that he is planning to leave Klay World and never return. He also reveals that he was the first Klayman on the table and that he himself built every other Klayman in Klay World. He explained that he had been repairing Klaymen after they died and that he had been instigating a majority of the violent situations that had been happening in the past simply for his own amusement. He also explains that he was, in fact, a good doctor instead of the terrible doctor the klay people thought he was, but he eventually decided it would be more enjoyable to kill the Klaymen instead of saving them.

However, he had become bored and decided to have a 'big finale' where every Klayman would kill each other and he wouldn't repair them afterward. He would then leave Klayworld behind and go to another clay world. He decided to spare Chip from the carnage and asked him where he should go.

Chip questioned how Dr. Bob was going to get the Klaymen to kill each other, and he pointed out that Klay World seemed peaceful, but Dr. Bob explained that he had hidden weapons in their food. A fight breaks out shortly after the Klaymen find guns and swords in the party food but Chip escapes along with Rick, Pick, and Marv.

Chip returned later and attempted to explain everything to the remaining Klaymen. Dr. Bob attempted to convince everyone that nothing was wrong and tried to get Pick back on his side. When Pick refused to follow him, he shot Pick in the back.

After Henry destroyed the table with a rocket launcher, he had a 'final battle' with Chip. The fight ended and he was killed when Chip dropped the table on top of both of them, though Chip survived. Bob tries to get out, ripping himself in two in the process. Chip tells Bob that the only reason that Klay World had such stupid inhabitants is because Bob made them that way, and that Chip was going to rebuild everyone. Chip explains that everything will be safer, and that Klay World will have a new name: Clay World, spelled with a "C". Bob realizes his mistakes and dies peacefully, the final shot of the series being from Bob's perspective, of him seeing the carnage he caused. 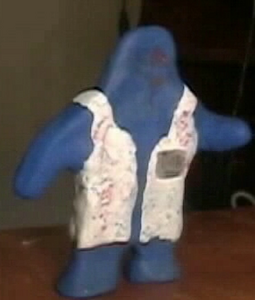 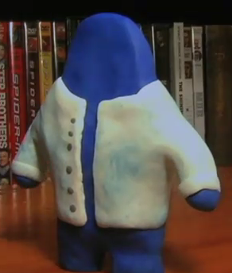 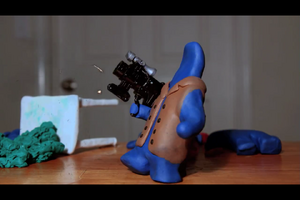 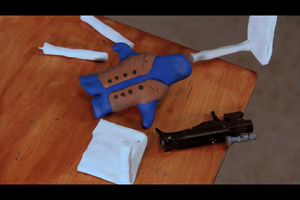 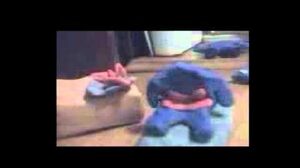 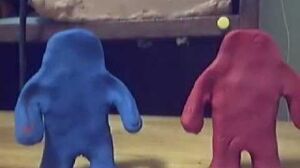 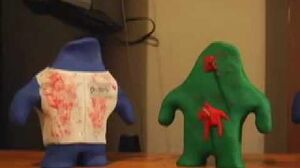 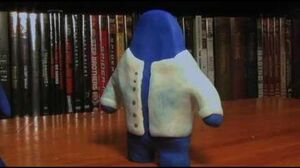 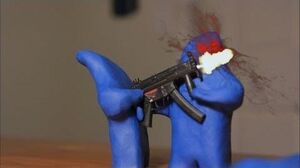 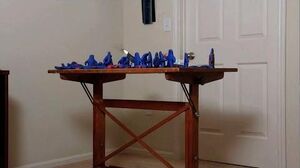 Klay World All Gone
Add a photo to this gallery

Retrieved from "https://villains.fandom.com/wiki/Dr._Bob?oldid=3440253"
Community content is available under CC-BY-SA unless otherwise noted.