Inventor
Head of Boom Labs
Commander of the League of E.V.I.L.

Dr. Boom is an antagonist originating in World of Warcraft, before becoming a recurring villain in the spinoff game Hearthstone. First appearing in the Goblins and Gnomes expansion, Dr. Boom later got his own expansion in The Boomsday Project, and became one of the leaders of the League of E.V.I.L. in the Year of the Dragon, representing the Warrior class.

Since The Boomsday Project, he was voiced by John DiMaggio, who also played Bender Bending Rodríguez in Futurama, the Joker in Batman: Under the Red Hood, Hannibal McFist in Randy Cunningham: 9th Grade Ninja, Lobo in Justice League Action, and Brother Blood in Teen Titans.

Dr. Boom is a deranged mad scientist with an obsession for explosions and destruction, creating explosive devices and reveling as he watches them go off. He claims that destruction brings progress, and wishes to bring the world to its knees, though does not act out any malicious intentions besides his lust of explosions. He also likes making comments, sometimes with light-hearted sarcasm.

Sparky Uberthruster was a goblin scientist located in Area 52 in the Netherstorm dimension, and protege to Lead Sapper Blastfizzle. Because he refused to wear his protective helmet, Sparky was driven insane by the Netherstorm's radiation and began calling himself Dr. Boom, stealing his former team's sapping equipment setting up a camp (which he named the Camp of Boom) in a remote area near Area 52 and building an army of exploding Boom Bots. Lead Sapper Blastfizzle requests players to defeat Dr. Boom by attacking his camp with bombs.

In this expansion, Dr. Boom made his first appearance in Hearthstone as a neutral legendary who summons two Boom Bots which deal damage to random enemies when destroyed. Due to the chaotic nature of the Boom Bots, Dr. Boom became very popular among the player base, which influenced his appearances as an antagonist in the later expansions.

Dr. Boom is the overseer and head scientist of Boom Labs, a lab he built in Netherstorm. He hired several scientists (most of which are morally questionable) to assist him in designing his "Boomsday Project". He is also the final boss of each chapter of the Puzzle Lab, after completing all of the puzzle experiments. He appears as Dr. Boom, Mad Genius, a Warrior hero card with a randomized Hero Power to represent his chaotic personality and lack of planning as he had created a goblin mech suit without having any idea how it would work.

At some point, Dr. Boom's lab was completely destroyed, and all of his associates and creations had abandoned him. He later got an invitation by Rafaam to join the League of E.V.I.L. to rekindle his dreams of bringing his explosive desires to life. Equipped with a jetpack and metal mask, Boom participated in the Great Dalaran Heist by sneaking into Dalaran's sewers to attach rockets to the floating city in order for the League to control it once they overthrow the Kirin Tor mages. He appears as the warrior minion Blastmaster Boom, who summons several Boom Bots for each Bomb shuffled into the opponent's deck, as well as several warrior cards involving shuffling bombs into the opponent's deck so that Blastmaster Boom can activate his ability.

Dr. Boom assisted the rest of the League of E.V.I.L. with resurrecting the proto-dragon Galakrond, each in their own ways. In Boom's case, he revived Galakrond by augmenting him with mechanical parts, turning him into Galakrond, the Unbreakable.

In Galakrond's Awakening, the League of E.V.I.L. battled with the League of Explorers. Dr. Boom used a large mechanical claw to capture Reno Jackson and imprison him in Violet Hold alongside the Uldum citizens that the League kidnapped. Eventually, Brann Bronzebeard rescued them and defeated Dr. Boom, but Boom's current status remains unknown. 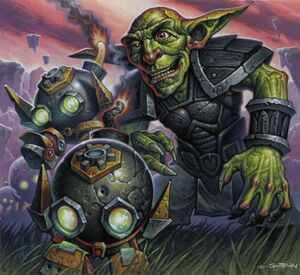 Dr. Boom's original appearance in the World of Warcraft TCG. 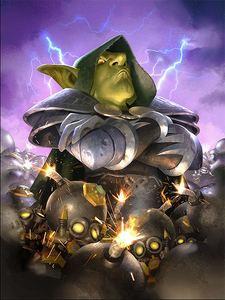 Dr. Boom in Goblins vs. Gnomes. 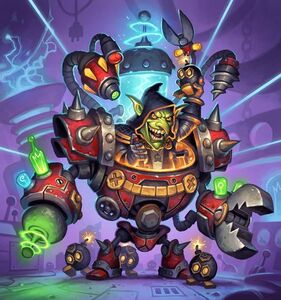 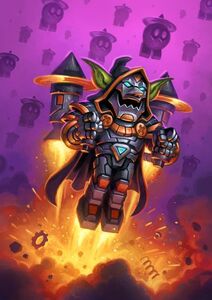 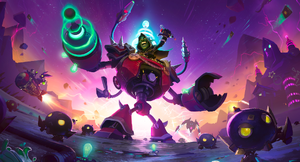 Dr. Boom in the Netherstrom. 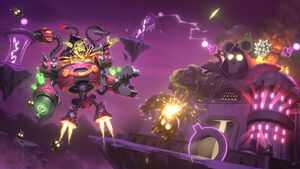 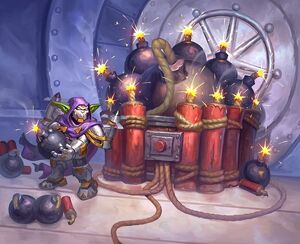 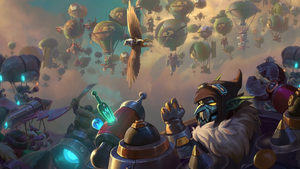 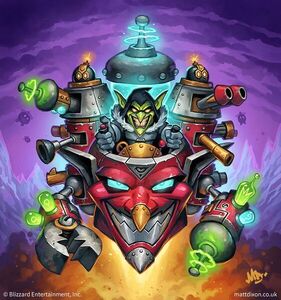 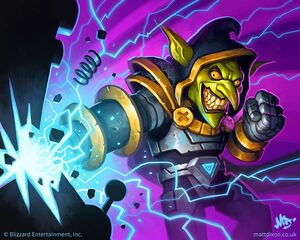