Trying to get revenge on Daring Do.

Get revenge on Daring Do.
Selling the Ring of Destiny to Ahuizotl.
Get the Amulet of Culiacan from Daring Do (all failed).
Ruin Daring Do's reputation (temporarily succeeded).
Exposing Daring Do's mistakes and secrets through the public (succeeded).
Get the Truth Talisman of Tonatiuh (formerly, abandoned).

Vengeful Mercenary
Dr. Caballeron is a former antagonist in My Little Pony: Friendship Is Magic, and Daring Do's former archenemy alongside Ahuizotl.

In the Daring Do book series, Caballeron made his debut in book 4, Daring Do and the Razor of Dreams. He is stated to have wanted to partner up with Daring Do on her adventures, but Daring Do refused.

He is voiced by Michael Dobson in a Spanish accent.

Caballeron and his henchponies used to discover ancient artifacts to preserve them in a museum, but Daring Do continuously interposed, refusing to team up with Caballeron and preserving the artifacts for herself. Caballeron begins to sell artifacts to the highest bidder, due to Daring Do's actions that caused his museum to go out of business.

In "Daring Don't", Caballeron is working with Ahuizotl. He wanted to sell the Ring of Destiny to the creature, make a fortune and retire in splendor. What Ahuizotl intends to do with the ring is apparently of little consequence to him. Caballeron and three stallions take the ring by force from Daring Do. Actually, Caballeron doesn't care about who wants the ring as long as he/she pays for it.

In fact in the forest, Dr. Caballeron and his henchponies encounter a disguised Daring Do who offers a large bag of bits for the ring and they have a deal. When Ahuizotl angrily storms onto the scene, Caballeron makes off with the bits and leaves the ring behind.

Dr. Caballeron appears again in "Stranger Than Fan Fiction". He seeks an amulet in Daring Do's possession that is the key to the seven-sided chest, a treasure that he seeks to sell to the highest bidder. He captures Rainbow Dash and Quibble Pants, believing them to be working with Daring Do and intending to lure her to the jungle so she'll trade the amulet for them. When they escape, they unwittingly lead him to the temple.

When a monster called a Cipactli attacks, Caballeron and his henchponies escape through a door, which closes, but with Daring Do's help, Rainbow Dash and Quibble Pants escape with the treasure. Caballeron and two of his henchponies, Rogue and Withers, search for them, but Daring Do throws a rock at the temple wall to release the Cipactli, which chases after Caballeron, Rogue, and Withers. Their fate beyond this is unclear.

He appears again in "Daring Done" where he steals glowpazes from a desert village and tries to ruin Daring Do's reputation. He then impersonates a cloaked villager and starts spreading lies about all the trouble Daring Do had caused and then framing her for the theft of the glowpazes. He then reveals himself to Rainbow Dash and has his hench ponies capture her to lure Daring Do into a trap. When they get out, they confront Caballeron and expose him as the true glowpaz thief. He is then run out of town by the townspeople. Daring Do's reputation is restored and honored as a hero, with Caballeron now a disgrace for his crimes and on wanted posters instead of Daring Do.

He makes his final appearance in "Daring Doubt" where his origins are revealed. In this episode, Caballeron becomes an author of Daring Do books under the alias of "Groom Q. Q. Martingale". He intends on publicly displaying Daring Do's biggest mistakes and secrets and tells his own side of the story. He tells Fluttershy that his immense hatred over Daring Do and his desire to get revenge on her stems when she stole the artifact that he saw which caused his museum to be closed down. Later, Fluttershy sympathizes with Caballeron's situation, he manipulates and uses her into joining his team's search for the Truth Talisman of Tonatiuh. Throughout the journey, Caballeron begins to recognize and appreciate Fluttershy's kindness. Later, he learns of Ahuizotl's true intentions and he and Daring Do promise to stop stealing artifacts from his lands. He also discovers Daring Do's true identity as A.K. Yearling as well.  He later finally becomes a co-writer for Daring Do and her partner. 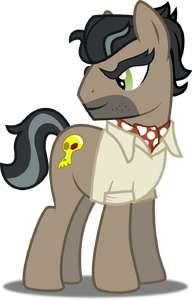 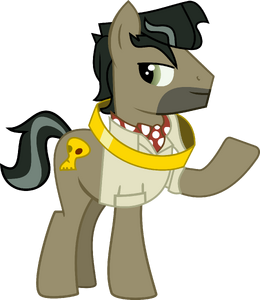 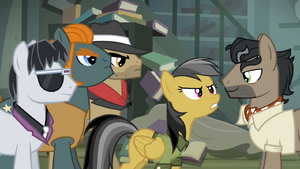 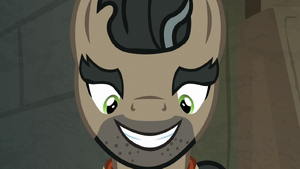