Separate Penny from Bolt and then conquer the city (failed in the TV series within the film).

Dr. Calico is the fictitious main antagonist in Disney's 48th full-length animated feature film Bolt. He is the main antagonist of the in-universe Bolt TV show, as well as Bolt: The Video Game and the Super Rhino short. Although he is portrayed by an actor in real-life, Bolt thinks he is an actual villain and believes Calico must pay for his actions.

He was voiced by Malcolm McDowell, who also played Alex in A Clockwork Orange, Caligula in the 1979 film Caligula, Colonel F. E. Cochrane in the 1983 film Blue Thunder, Tolian Soran in the 1994 film Star Trek: Generations, Kesslee in the 1995 film Tank Girl, Gangster in the 2000 film Gangster No. 1, Marcus Kane in the 2008 film Doomsday, the Tower in Disney's Phineas and Ferb, Sinclair in the 2012 film Home Alone: The Holiday Heist, and Geoffrey Tolwyn in the third and forth Wing Commander videogames.

In the Bolt TV Show

Dr. Calico is a charismatic evil genius with a mutated green cat-like right eye. No explanation is given about his eye, although it implies his affinity for owning cats.

Calico is the head of an unnamed high-tech crime syndicate whose goal is to achieve world domination. Its primary minions are armed with electric gloves, laser guns, and protective motorcycle helmets. Elite henchmen are known as agents, who are armed with concealable high-tech weapons, and considerably more training than standard henchmen. Aside from them, Calico also has associates and thugs who assist him in his plans with world domination.

Despite his resources, Calico requires the help of greater intelligence to achieve his goals. He kidnapped Penny's father, although he could not defeat the will of the doctor, who seemed impervious to his means of persuasion. It is implied from their interactions that they may have once been partners.

In order to gain the cooperation of the scientist, Calico tried to capture Penny. But his every attempt to do so was thwarted by Bolt, whom Penny's father had given superpowers to protect her. The scientist's amazing knack for genetic mutation might have had something to do with Calico's plans for world domination, which might have been why he was interested in him.

Calico never seems to be intimidated by Bolt's powers, nor do his henchmen. Judging by the countless pawns he hurls at Bolt, Calico might have armies to spare. His organization might not be just a syndicate, but an entire revolutionary community.

After capturing Penny's father, Calico then pursued the one thing that would get him to cooperate, Penny. Calico finally managed to capture Penny once she and Bolt found his temple base in the Ukatan jungle. To prove Penny was alive and in the custody of her father, Calico gave Penny a cell phone with her father on the other line. Calico then attempted to flee the crumbling temple with his new captive but decided to leave her there with Bolt to die, saying, "As long as the professor believes she's alive, he will do what is asked and finish the weapon. Too bad we can't all have nine lives."

However, Penny and Bolt survived and discovered Calico's new arctic base with a large rocket in the center. But upon entering, Penny notices micro-focusing mirrors and realizes that it is her father's satellite instead of a warhead. All too late as Calico seals the entrance and, to Bolt's horror, launches it with Penny inside saying. Bolt then jumped onto the rocket and dismantled it in mid-flight, crashing it into the snow.

The two then ventured to Calico's harbor in Japan, where they discovered a ship full warheads. Just then, Calico arrived at the harbor, enraged to find Penny still alive, and even more so as he watched his prized freight ship sink into the water, thanks to Bolt, who then pursues Calico, escaping in his car to a nearby train station. He arrives at the station and boards his train, closely followed by Penny and her dog. Just as the duo finally corners the doctor, he slips into a hidden room and escaped on his private jet, but not before Penny secures a homing beacon onto the hull, leading them right back to Calico's base.

Penny and Bolt traced his jet back to his main base, where Penny's father was being held. However, upon arriving, Calico used his new weapon on Bolt, draining him of his powers and strength and capturing Penny. Once Penny is inside, he explains his plan to use Penny's father's micro-focusing mirror-equipped satellites to bounce a beam around the Earth and neutralize and destroy all atomic weaponry except for his own. And as he leaves, he violently kicks Bolt's cage proving Penny of her limited knowledge. However, during this, Penny maneuvered her way out of her hand bindings.

Once free, she attempted to find her father to save Bolt. Unfortunately, she is only captured by the doctor once again, just as Bolt regains his powers and Penny sabotages the control panel, however, raising the bridge so Bolt could reach her. Once he did, Penny escaped from her guard captors yet again and launched a pre-prepared, rocket-powered cart at the main power generator (which Bolt exposed). Calico then infused himself with the remaining power and dueled with Bolt, but was ultimately defeated. Beaten and weakened, he attempted to escape on his private helicopter, launching numerous missiles as a decoy, just as Penny finally finds her father (aboard the helicopter).

But, while Bolt tried to apprehend Calico by grabbing his foot, Penny's father pleads to her and Bolt to allow Calico to escape with himself to stop the missiles, reminding her that she had the power to find him again. Regretfully, Penny ordered Bolt to stop the missiles as Calico escaped with her father.

Dr. Calico is first seen on video with Penny's father captive, talking to one of his associates as Penny and Bolt spy on him. As the associate tries to leave, Penny and Bolt capture and interrogate him, learning of Calico's base in Bolivia. Though Penny and Bolt infiltrate the base and attempt to figure out Calico's goals, Calico himself appears with his cats, revealing it to be a bait for Penny. He imprisons her in what appears to be a portable toilet and flies away, laughing maniacally.

Calico returns to Penny's father and soon reveals a captive Penny, threatening to dip her in lava. She calls for Bolt, much to Calico's shock as he orders his minions to attack Bolt. Not much is known about what happened afterward, as the shooting for the episode was interrupted.

Later, Penny undergoes facial reconstructive surgery, and upon seeing her new face, believes that Calico will be unable to recognize her. A disguised Calico then sneaks up on Penny and attempts to kill her with a possibly fatal drug, only for Bolt to destroy the syringe and rescue her. However, aliens soon arrive and abduct Penny and Bolt, much to Calico's disgust.

The Actor behind the Villain

The history of Dr. Calico's in-universe actor is not revealed, nor even what his actual name is. It is known, however, that he started playing Calico at one point before events in the movie began. Over the course of the film, he is mostly seen working on shooting for the Bolt TV show where his acting mostly goes smoothly as the Director never complained about his works. Calico's actor is unaware that Bolt genuinely hates him and sees him as an actual villain because of the Director's actions.

While he manages to escape during the fire when the shooting went wrong at the climax of the film, the actor's interim fate is unclear other than he returned at least for the alien abduction scene.

In the short, Dr. Calico successfully manages to kidnap both Bolt and Penny, imprisoning his captives in a heavily fortified base that (as he claims) neither man nor dog can even penetrate. Unknown to Calico, Penny's father learns about the abduction through a special device implanted in Bolt's collar, causing Penny's father to empower Rhino in the same way he did Bolt.

Rhino blasts into Calico's fortress with his super-speed and uses his powers to battle Calico's henchmen. After breaking into the base itself and briefly talking with Calico, Rhino proceeds to rescue Bolt and Penny in a showdown. Calico rises from the ruins and swears revenge, only to be taken down by Rhino's super-squeak, leaving him confused. 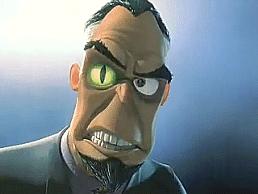 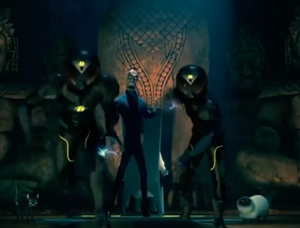 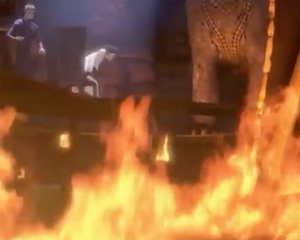 Calico during the stage fire. 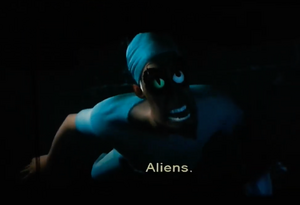 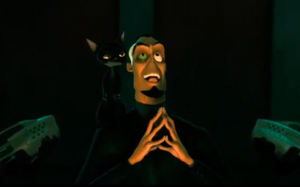 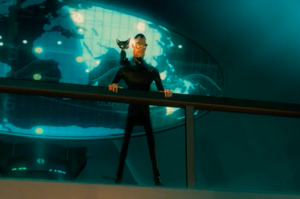 Staring down form a railing. 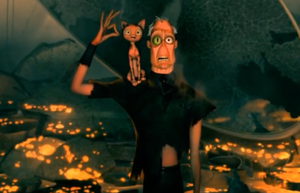 Calico and his cat after being caught on fire. 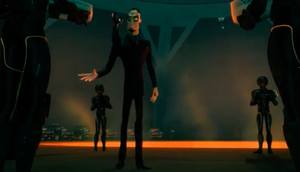 Talking to his minions. 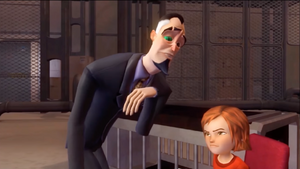 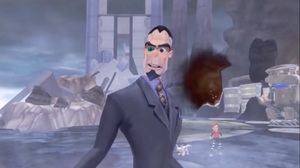 Commanding his men to fire the missiles. 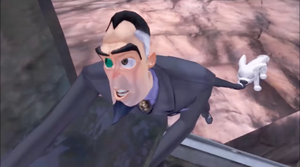 Being pulled by the shoe.