The Cabinet of Dr. Caligari

Director of an asylum

Finish the experiments of the monk Caligari by making the somnanbulist Cesare a sleep-walking killer (only in Francis' hallucinations, failed)

Cure Francis of his delusions that he is a mad scientist called Caligari (in reality, ongoing)

Orchestrating a killing spree (all in Francis' hallucinations only)

Dr. Caligari is the titular main antagonist in the 1920 silent era film The Cabinet of Dr. Caligari, considered the quintessential work of German Expressionist cinema and one of the very first horror films. However, the twist at the end of the film reveals that he is not evil at all.

He was portrayed by the late Werner Krauss.

The deranged Dr. Caligari and his faithful somnambulist Cesare are connected to a series of murders in a German mountain village, Holstenwall. Caligari introduces the main narrative using aframe story in which most of the plot is presented as a flashback, as told by Francis (one of the earliest examples of a frame story in film).

The narrator Francis, and his friend Alan visit a carnival in the village where they see Dr. Caligari and the somnambulist Cesare, whom the doctor is displaying as an attraction. Caligari hawks that Cesare can answer any question he is asked.

When Alan asks Cesare how long he has to live, Cesare tells Alan that he will die before dawn tomorrow - a prophecy which is fulfilled.

Francis and his betrothed Jane investigate Caligari and Cesare, which eventually results in Cesare kidnapping Jane. Caligari orders Cesare to kill Jane, but the hypnotized slave refuses after her beauty captivates him. He carries Jane out of her house, leading the townsfolk on a lengthy chase. Cesare dies of exhaustion after discarding Jane at the end of the pursuit, and the townsfolk discover that Caligari had created a dummy of Cesare to distract Francis.

Francis discovers that "Caligari" is actually the director of the local insane asylum, and (with the help of his colleagues) discovers that he is obsessed with the story of a monk called Caligari, who visited towns in northern Italy and used a somnambulist to murder people in a similar fashion in 1703. After being confronted with the dead Cesare, Caligari reveals his mania and is imprisoned in his asylum.

A "twist ending" reveals that Francis' flashback is actually his fantasy: he, Jane and Cesare are all inmates of the insane asylum, and the man he says is Caligari is his asylum doctor, who, after this revelation of the source of his patient's delusion, says that now he will be able to cure Francis. 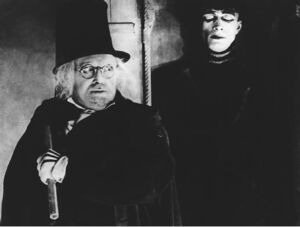 Dr. Caligari and his sleeping somnambulist Cesare.
Add a photo to this gallery

Retrieved from "https://villains.fandom.com/wiki/Dr._Caligari?oldid=4158946"
Community content is available under CC-BY-SA unless otherwise noted.