Honey, I Blew Up the Kid

To take over Sterling Labs and Wayne's machine, and subdue Adam Szalinsky at all costs (failed).

Dr. Charles Hendrickson is the main antagonist of the 1992 Disney film Honey, I Blew Up the Kid, the sequel to Honey, I Shrunk the Kids. He was a high-ranking employee at Sterling Labs and the (former) boss of Wayne Szalinski, the inventor of the shrinking machine.

He was portrayed by John Shea.

Wayne Szalinski (the protagonist of the film) was in charge of a project to develop a new machine that makes objects shrink and grow in size. Though Wayne is successful in replicating his shrinking experiments, Hendrickson attempts to take over the project for himself by overseeing growing experiments; even arranging the lab's security personnel to bar Wayne from accessing the lab's equipment without his permission (despite being aware that Wayne is the real inventor of the machine). It is later revealed during a dinner with board director Terence Wheeler that Hendrickson plans to usurp Clifford Sterling (the founder and CEO of the labs) so that he can take full control of the project.

On a Saturday during his day off, Hendrickson is playing tennis when he receives a call from a security guard at the lab informing him that Wayne was at the lab with his sons Nick and Adam trying to work on the machine without his permission. By the time Hendrickson gets there, Wayne and his sons have already left, but Hendrickson finds that their experiment caused a power surge which damaged the equipment. Unbeknownst to everyone, Adam and his stuffed bunny got zapped by the machine's ray without being harmed, and whenever Adam came into contact with any electrical appliance, it caused him and his toy bunny to grow.

Upon realizing what really happened, Wayne and Nick go back to the lab to try and shrink Adam back to normal size, but are instead confronted by Hendrickson, who informs Wayne that he is off the project because of the power surge. Wayne furiously reminds Hendrickson that the authority to make that decision belongs to Sterling himself, but Hendrickson informs Wayne that while he may plead his case, Sterling will not want to listen to him after the damage he caused. After Wayne and his sons leave, Hendrickson instructs two lab technicians to try and find out what Wayne was up to. After they uncover a bizarre image of Adam and his stuffed bunny, Hendrickson decides to pay Wayne a personal visit.

Hendrickson makes his way to the Szalinskis' house only to find a 14-foot-tall Adam playing in the street, surrounded by bystanders. He also learned that Wayne and his wife Diane have brought up Wayne's original shrinking machine from the lab's security warehouse to shrink Adam back to normal size. However, rather than letting them do so, Hendrickson instead arranges for Adam to be taken away in a large tractor-trailer and plans to have the Szalinskis (and the babysitter Mandy Park) arrested so that he can take Wayne's original machine for himself and perform immediate testing on Adam (believing him to be mutated), much to Wayne and Diane's outrage.

To ensure of this, Hendrickson summons Sterling in hopes of getting his approval. When Sterling arrives, Wayne pleads with him to give him a chance, promising to return his son to normal size by giving him a compassionate speech about inventors. Hendrickson proceeds to mock Wayne, but Sterling is touched by Wayne's efforts and promises to help Wayne return Adam to normal the proper way, but not before firing Hendrickson for trying to smear Wayne. The Szalinskis and Sterling eventually soon learned that Adam has grown even bigger as he bursts out of the truck (due to it passing over high-voltage lines) and proceeds to pick up Nick and Mandy and put them in his pocket before heading toward Las Vegas. It was then both Wayne and Sterling soon realized that the electromagnetic energy passed on any electronic device is the true cause behind Adam's growth, so they set the shrinking machine that will not only shrink Adam back, but also get rid of the energy to prevent any more incidents.

However, Hendrickson refuses to accept his dismissal and vows to subdue the overgrown Adam his own way. He gets Wheeler to formulate a boardroom coup against Sterling and authorize an airstrike by the Nevada State Militia with tranquilizer cartridges. The pilot captain, Ed Myerson furiously disapproves of this plan in general (even admitting to being a parent himself), but Wheeler produces the required paperwork for the operation, forcing a distraught Myerson to take off in the helicopter with Hendrickson. By this point, Adam has grown so large that he towers over the city of Las Vegas. He picked up the Hard Rock Cafe guitar and begins trying to play it, thinking it to be real.

Upon arriving to the scene, Hendrickson aims the gun at Adam, but Myerson warns that taking down Adam would make things worse as it would cause him to fall into the crowd and crush them to death. However, Hendrickson does not care as he still wants to take down Adam, but just as he fires the first cartridge, Myerson (in an act of conscience) makes a sudden maneuver, causing Hendrickson to miss. Hendrickson angrily threatens Myerson that this will be his last mission if he makes him miss again. Hendrickson then shoots a second cartridge, but this time at the Hard Rock Café guitar, causing an electrical shock that forces Adam to throw and damage it on the street. Adam starts crying due to the shock he received from his hands; even the horrified crowd share their sympathy for his pain. However, Hendrickson remains unperturbed by this and tries to aim at Adam again, but just then an over-sized Diane, whom Wayne had enlarged using his original machine, grabs hold of the helicopter and tells them to back off, to which Myerson instantly obliges. Diane then places the helicopter on the ground and manages to comfort Adam before they are returned to normal size by Wayne, much to the crowd's astonishment and delight.

With his plan foiled and the Szalinskis reunited once again, Hendrickson reluctantly congratulates Wayne for averting the crisis. Diane then confronts Hendrickson about trying to shoot Adam, but Hendrickson assures Diane that the tranquilizers would not have hurt him. Diane pretends to buy it and turns back to Wayne, informing him of what Hendrickson had said, but then turns back around and furiously punches Hendrickson hard in the face, knocking him out, much to his humiliation. Dr. Sterling calls for an ambulance, but remains firm on his decision to fire Hendrickson, jokingly remarking that Hendrickson is "overcome with the prospect of having to find a new career." (which Diane smiles about).

It can be implied that Hendrickson was arrested on the charges of child abuse and reckless endangerment. 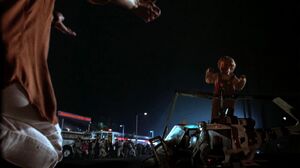 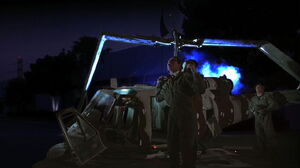 Hendrickson watches in shock as both Adam and Diane are preparing to revert to their normal sizes. 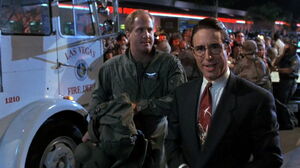 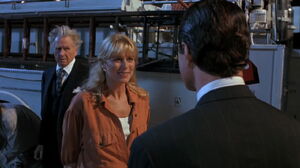 Diane confronts Hendrickson about his attempt to shoot Adam. 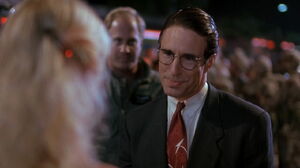 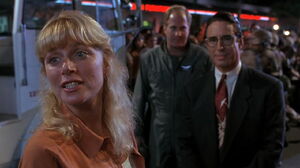 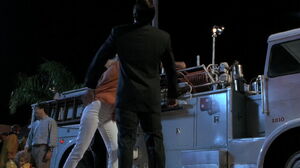 Diane punches Hendrickson in the face for harming Adam, knocking him out. 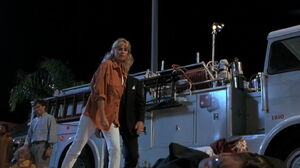 Hendrickson thuds to the ground. 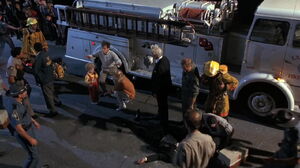