Scientific knowledge
Control over the military

Designing and testing weapons for the Cold War.

Create the most powerful weapon in the world through the capture and control of the Blob.

Kill Brian Flagg and everyone else who stands in his way (both failed).
Feed the citizens of Arborville to the Blob to test its potential (partially succeeded).

Dr. Christopher Meddows is the central antagonist of the 1988 remake of The Blob. He is a military scientist who specializes in bioweapons, who created a germ warfare weapon that mutated into the Blob. While he did not intend for it, he wanted to test its potential and has the town quarantined, deeming the civilians and some of his own men expendable.

He was portrayed by the late Joe Seneca.

Dr. Meddows is the scientist who led the military operation to have a germ warfare weapon created in hopes to have it combat the Soviets in the Cold War. After the germ weapon was created, Meddows decided to test it by having it fired into space in a man-made capsule vaguely resembling a meteor and having it land in the town. In space, the germs mutated into the Blob. The meteor landed on the outskirts of Arborville, where the Blob began its rampage. Two teenagers, Brian Flagg and Meg Penny had a number of encounters with the creature before first encountering Meddows.

Meddows leads the operation to the crash site and orders the town to be quarantined. As the Blob grows larger, more people are eaten. Meddows explains to Brian and Meg that the operation is about prevention, and he had a theory that an alien bacteria from a meteorite is what killed the dinosaurs (which was a lie). Meddows has Sheriff Briggs take Meg and Brian back into town, but Brian jumps out of the van to stay and discover the truth about Meddows.

Later, Brian overhears Meddows talking to his assistant Mr. Jennings, discovering its origins and Meddows is planning on having the Blob trapped in the sewers, where Meg is rescuing her brother Kevin and his friend Eddie wanting to let them die on the way, if necessary. Meg and Kevin flee from the Blob after it emerged and devoured Eddie. Kevin escapes to the surface by scaling a pipe and squeezing through a grate, but Meg could not fit through. Meddows realizes Brian's presence and had his men hunting him down, but Brian eludes them in the sewers on his motorcycle. Brian manages to rescue Meg. Meddows and his men move into town to enforce the quarantine, and they catch Brian, Meg, and an injured, terrified soldier trying to get out of the sewers, and orders them to be sealed in. Dr. Meddows beckons a van driver to put a tire on the manhole cover.

Shortly after, Brian breaks out with Meg and the injured soldier using the soldier's rocket launcher to destroy the truck that blocked the hole. He takes a dropped assault rifle and confronts Meddows in a Mexican standoff in front of the entire townspeople. Brian reveals the truth to everyone and Meddows tries to convince everyone that Brian is infected and must be killed, but fails. Meddows attempts to shoot Brian himself, but suddenly the Blob grabs Meddows and pulls him towards the sewer with its tentacle. Meddows manages to hold onto the edge, but the Blob oozes into his suit and after a struggle, violently drags him into the sewer, giving him a rather ironic and karmic death.

While initially seeming to be friendly and helpful at first glance, and appearing to have Arborville's and the world's best interests at heart, he is shown to be a very cold and heartless sociopath. What solidifies him as a monster is, while he did not intend for the Blob to be created from his prototype, he is still more than pleased with the results, and he deemed the town expendable for his cause in the name of the Cold War, as he launched the prototype into the town before he knew it mutated. He is also careless about his own men, as shown when he sealed some of them in the sewers with the creature. 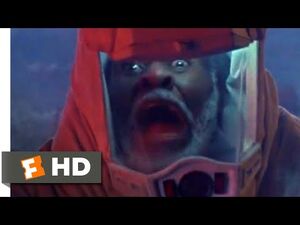