Villains Wiki
Register
Don't have an account?
Sign In
Advertisement
in: Female, Power Hungry, Doctors and Scientists,
and 26 more

Dr. Coyle is the main antagonist and final boss of the 2017 video game ARMS. She is the director of the sinister ARMS Laboratories that research the mysterious ARMS phenomenon, and the creator of Hedlok, Helix, and Springtron. Obsessed with ARMS, she desires to become the strongest ARMS fighter through any means. She was added as a playable character in the 5.0 update.

She was voiced by Donna Burke.

Little is known about Dr. Coyle's past. What is known is that she was very fascinated by ARMS since she was young, and devoted her entire life to researching it. She also seems to know Max Brass in the past, as her Grand Prix ending shows her and Max Brass while she's creating an experiment, presumably long before the events of the game. They seemed to have a falling out, however, and Dr. Coyle seems to hold a grudge against him ever since.

Dr. Coyle eventually became obsessed with ARMS, and begin seeking ways to make herself stronger. To this end, she observes the ARMS fighters and collects their data. She seems to be especially interested in Spring Man, as she created a robot based on him. She also created Hedlok, a menacing masked robot that attaches itself to other fighters. Finally, she subjected herself to experiments. Afterwards, she decided to participate in the Grand Prix herself.

Dr. Coyle appears in the Grand Prix as the final boss starting from level 6 upwards (Unless the character the player is using is Dr. Coyle herself). Right before the player and Max Brass fight, Dr. Coyle suddenly appears from nowhere and engages in battle with Max Brass. Dr. Coyle defeats Max Brass and sends him flying, stunning the player's character, Biff, and the audience. She then engages battle with the player herself.

While she proves to be a powerful foe, the player manages to defeat Dr. Coyle in battle. She is frustrated at her defeat but then points up to the sky, revealing her "masterpiece" Hedlok. She willingly lets Hedlok attaches itself to her, then engage the player is one last battle.

After being defeated once again, Dr. Coyle is seen on her knees, seemingly devastated by her loss. Hedlok suddenly starts glowing, just like it does with Max Brass, and then have its ARMS fell off, but it then suddenly stops. Dr. Coyle removes Hedlok from her and, in frustration of her defeat, angrily destroys Hedlok in a pit of rage while deeming it "useless". She then disappears from the arena, never to be seen again. Max Brass is then seen floating down to the arena with Parasols, surviving the incident with Dr. Coyle.

Dr. Coyle is a scientist wearing a metallic suit, with her design being centered around electricity. Her ARMS are made of copper with rotating coils around them, referencing electromagnetic induction. She has green eyes, green hair that covers one eye, purple lipstick, and a purple mask. Her outfit is a black and green suit with a high collar and a zipper, a belt, grey tights, matching black and green boots, and black studded fingerless gloves with her logo on them, as well as green painted nails. Other outfits have her in a turtle-neck sweater, a lab coat, and glasses, and a dress-like lab coat with black pantyhose and green high heels with black soles.

Just like the other fighters in the game, Dr. Coyle has the ARMS phenomenon, allowing her to stretch her ARMS at great length when she punches. She equips two ARMS weapons in each of her ARMS. Her preferred weapons are the: Lokjaw, an explosion ARM that resembles Hedlok and is capable of shooting the dark energy like Hedlok. The Parabola, an electric parasol that disables her opponents ARMS when charged. And the Brrchuk, a nunchuck that freezes the opponents and slows them down when charged.

Dr. Coyle, like the other fighters, also have her own unique abilities, presumably because of her experiments. For starters, she is able to create a third arm that is a duplicate of either her left and right arms after she charges. The third arm disappears quickly, though, it must be thrown out fast. She can also turn invisible when she guards or after she gets up after being knocked down. Finally, she's able to levitate in mid-air instead of jumping and can continue to levitate as long as the player holds down the jump button. Because of this, she descends slowly. 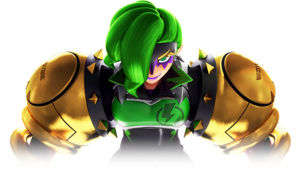 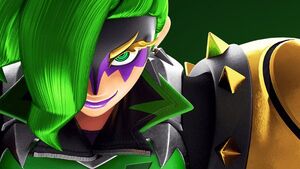 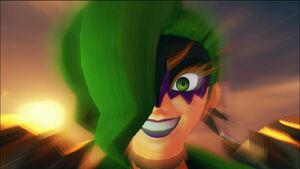 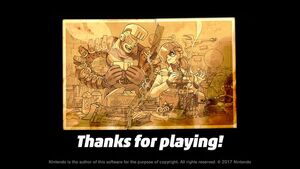 The picture at the end of Dr. Coyle's Grand Prix.

The badge you get for beating Dr. Coyle in the Grand Prix.

The badge you get for reaching Level 5 in the seventh Party Crash.

The badge you get for reaching Level 10 in the fifteenth Party Crash. 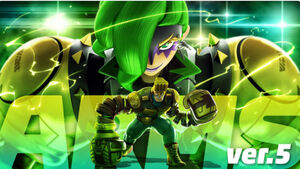 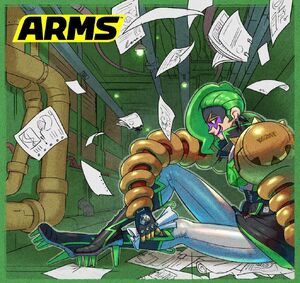 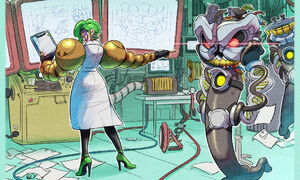 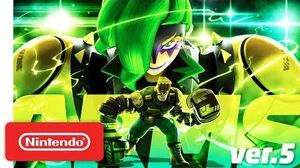