Dr. Thaddeus Dare, or better known as Dr. Dare, is an antagonist in Loonatics. He was a mad scientist who devised a means of controlling Earth's geology through earthquakes and other subterranean events. He could also create rock monsters, effectively meaning his total powers combined could be considered a form of geokinesis.

He was voiced by Simon Templeman.

When the destructive meteor hit Acmetropolis, he was horribly disfigured, by way of his arm and part of his face becoming rock, and his experiments grew more reckless, forcing the world to send him underground - literally. He performed all of these feats with a staff which could also turn his enemies into stone, which was later revealed to be powered by the Jade Serpent Crystal, an ancient gemstone with a unique atomic structure, containing untold energy. His ultimate intention was world domination by taking everything that's up top to below the Earth's crust so he would live in peace on the surface.

He fired a petrifying beam at the Loonatics which was deflected back at him. His statue-form remains in Acmetropolis Park until Tech's Atomic Phase Departiculator freed him during battle with Sagittarius Stomper . He created new rock robots and steals the Shield of Perseus and altered it so that it had a Gorgon's face and the ability to fire petrifying beams from the eyes on that face, a reference to what happens when you look into a gorgon's eyes.

When he escaped in "Cape Duck" Loonatics thwarted him again and he ended up with the same petrification fate as before when he landed on the Shield of Perseus. 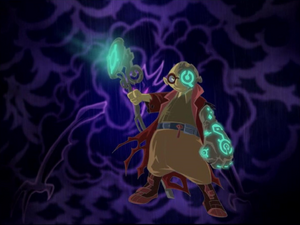