Improve his device and make money by selling it (succeeded).

Get away his with actions (failed).

Dr. Deverich is the main antagonist of the 2012 Godzilla comic book Godzilla: The Half-Century War. Essentially a scientist from the organization that combats several giant monsters that rampaged across the world known as the Anti Megalosaurus Force (A.M.F.), Deverich was dismissed by the organization after one of his inventions, the Psionic Transmitter, endangered one of the soldiers that uses it. Taking all of his research data and seemingly disappearing without a trace after being sacked by A.M.F., it was revealed that Deverich converted his machine to become a device to lure monsters and selling it to terrorist organizations across the world, making him responsible for all of the carnage and bloodshed across the world that spans across half-century and also making him on the A.M.F.'s number one most wanted criminal.

Dr. Deverich is a Caucasian man that appears unassuming for a man of his skill, sporting messy, blonde hair, black eyebrows, and pronounced cheekbones. For clothing, he sports a standard jacket (red in Ghana, blue and green in Mumbai), a gray belt, beige pants, black shoes, rectangular glasses, and (during his stint in Mumbai) a red baseball cap.

Deverich himself can be considered as a slimy, weaselly, and petty man. His pettiness can be shown where he willingly left the entire world to doom with his own machine that he sold to several terrorist organizations that causes several monsters to go on a rampage for several decades just because he was dismissed as the Head Researcher of the Anti Megalosaurus Force, uncaring for the untold of the number of casualties he had on his hands. He is also a coward as well who tries to save his own skin several times where he got nearly caught by the A.M.F. Despite seemingly hating his new job selling his devices to terrorist organizations, it was not because he cared so much towards the people that he indirectly murdered, but because he was only interested in his own self-preservation and refused to be controlled by several organizations that viewed him as a valuable asset.

Deverich could be considered arrogant as well to a certain degree due to him being proud of the accomplishments that he had made. His arrogance can be shown when he calls the psionic transmitter that he perfected to summon several monsters as a jewel in his crown despite calling it a tad excessive or when he calls his machine to be an elegant yet simple solution to new world problems when he attempts to promote his device in Accra. Despite his sliminess and pettiness, Deverich can be shown as a Faux Affably Evil businessman who is good at negotiating with his customers as was shown during the Accra incident where he attempts to advertise his device towards the terrorist organization and is successful at it. In the end, Deverich does not regret on what he had done and the only thing that he's proud of is his own accomplishments on creating something and also using it for destruction to fill his pockets.

Prior to the main story, Deverich works as a scientist for the Anti Megalosaurus Force organization that invented the device known as the Psionic Transmitter. Said device can be used to lure away several monsters. including Godzilla, from the heavily populated areas. However, due to the one incident in Yokohama where the Japanese soldiers Lt. Ota Murakami and Kentaro Yoshihara were nearly killed by a large chunk of a collapsing apartment thanks to Deverich's device when trying to lure Godzilla with it, the Psionic Transmitter project was closed, which resulted in Deverich being fired by the A.M.F. while taking all of his research data and seemingly disappearing without a trace.

Years later, however, it was revealed that Deverich was still at large, and converted his Psionic Transmitter into a Monster Attractor to sell to terrorist organizations. This resulted in several giant monsters rampaging across the world, destroying everything they see.. Deverich's antics were so bad that the A.M.F. formed several teams to combat against the monsters that rampaged across the world, one of the first sightings of the monster rampage thanks to Deverich's machinations was around 1967, where Godzilla and Anguirus wreck their way across Taiwan, the coast of China, and the near entirety of Vietnam.

Although Deverich was implied to be dead at first by the A.M.F. because he was boarding a cargo plane at Vietnam that got smashed by Anguirus and Godzilla, Deverich was revealed to be alive and well continuing his misdeeds especially by summoning Rodan to the Philippines with his device. However, the worst act that he had done was in 1975, where he decided to demonstrate his device to be sold by the terrorist organizations by summoning several monsters to flatten the capital city of Ghana, Accra, to the ground. As the A.M.F. were dispatched to Ghana to defeat several monsters there, they found out the situation was hopeless, which resulted in them decided to look for the source of the psionic transmitter that causes the monsters to go berserk.

Successfully tracking the source of the psionic transmitter through the broadcasting tower, it was then revealed that Deverich was hiding there, negotiating with the leader of one of the terrorist groups while still advertising his machine. Encountered by the A.M.F. team, Deverich decided to save his own skin by amplifying his device before fleeing, resulting in several monsters attempting to attack the broadcasting studio. This attack resulted in the death of the leader of the A.M.F., Colonel Schooler, causing several A.M.F. teams to be disbanded, and those who stay at the organization, Ota and Yoshihara, being relegated to become an observer of the monster attacks so that the A.M.F. can capture Deverich easier.

As Ota and Yoshihara were dispatched to Mumbai in 1987, where Godzilla rampages through the city, Ota decides to smoke outside the truck where they observed Godzilla's rampages in Mumbai due to the fact that his companion, Kentaro Yoshihara, didn't like seeing it. When Ota was smoking, he then encounters Deverich trying to assimilate with the crowd to no avail, as Ota calls for backup to track down Deverich. As Deverich ran away from Ota and returns to his hideout, he then negotiated with several shady individuals in order to sell his transmitters for easy money. Mumbling that he is seemingly uncomfortable with his job because he doesn't have any freedom and wants to save his own skin, he was then encountered by Ota, who wants vengeance for what Deverich has done in Ghana.

When Ota manages to capture Deverich, he then calls the latter out about him trying to get away scot off free. This resulted in Deverich responding to Ota that he couldn't get away as a free man, because several terrorist organizations and shady organizations viewed him as a valuable asset. When Ota asked about the location transmitter was, Deverich answers that it was right behind Ota all along, and it was then revealed that Deverich made the transmitter a thousand times more potent than the last model, calling it a jewel in his crown despite it was being excessive. This resulted in the transmitter bringing in SpaceGodzilla, much to Ota's dismay. Although Deverich was arrested in the end by the A.M.F., his device also calls forth King Ghidorah and Gigan, as they rampaged across the world until 2002, where humanity is at the brink of extinction with half of it dead. However, in the end, Ota saves the day by destroying the monsters with all his might and sacrificing himself, even if it was revealed that another monster will appear in the end. 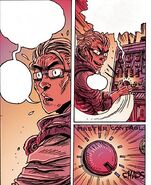 Deverich circa 1975 trying to save his own skin by amping up his psionic transmitter after the A.M.F. trying to capture him.

Deverich circa 1987 trying to blend in with the crowd that ran away from the monsters, only for Ota to find him.

Deverich circa 1987 negotiating with the terrorists

Deverich being captured by Ota and has no choice but to comply by telling the psionic transmitter's whereabouts.